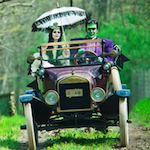 Well whaddya know, Rob Zombie made a PG-rated movie version of The Munsters. It’s a Universal direct-to-DVD-and-blu-ray movie, also released to Netflix on the same day, and to be honest the trailer looked pretty cheesy to me. Pre-release word I’d seen had been dire, and a pretty dull opening stretch had me worried, despite it immediately capturing a strong classic horror look.

But hot damn, by the end I really liked this one. In fact I might’ve loved it. It has that thing I always respect in a movie: it’s something that no other director would’ve thought to make, or would’ve wanted to make, or would’ve known how to make. This is an idiosyncratic horror auteur reviving his childhood favorite sitcom in defiance of the fact that it’s a style of show and humor that are completely out of fashion. He doesn’t feel the need to turn it into something hipper or grittier or more modern. It’s just shameless cornball humor. But also he doesn’t tone down anything about his cinematic style (other than excluding the foul-mouthed redneck stereotypes talking about skull fucking or whatever). It’s very much the same The Munsters we know but also it’s also the Rob Zombiest Rob Zombie movie possible – a beautiful two-headed beast of a thing. END_OF_DOCUMENT_TOKEN_TO_BE_REPLACED

Since 3 FROM HELL is not as good as REJECTS, and not as big of a leap from its previous chapter, it doesn’t feel entirely necessary. And that makes it harder to ignore the hollowness of these movies. As far as I can tell they’re not saying much, just trying to be provocatively inappropriate, and they’re less about human beings than about Zombie’s fetishes: weird clowns, redneck chic, tattoos, bushy beards, satanic symbols, Manson Family nostalgia, ’70s rock montages, kitschy western gear over cheeky retro-t-shirts, black and white monster movies playing on old TVs. But I can appreciate most of that stuff, so I can enjoy an occasional dip into Zombie’s distinct mix of uncomfortably fucked up shit, cool visuals, some laughs and some stretches where you realize you’re too invested in these terrible people and feel like an asshole. END_OF_DOCUMENT_TOKEN_TO_BE_REPLACED 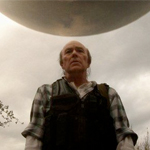 This one focuses entirely on Reggie (Reggie Bannister), the ice cream man/singer-songwriter turned four-barrel-shotgun-toting warrior drifter who started as the adult friend to the young protagonist, Mike (A. Michael Baldwin). We first find him falling through a portal back to earth in a stretch of desert somewhere. The badass opening sequence recalls MAD MAX as he scavenges wreckage in a seemingly unpopulated area, has to get back his missing Barracuda and then is involved in a high speed chase with the famous silver balls that fly around trying to stab or drill people’s heads. While this chapter does suffer from some phony digital gore, that’s thankfully not the case with the many incidents of balls digging into people’s skulls and spewing geysers of grue out their exhaust valves like water out the back of a jet ski. END_OF_DOCUMENT_TOKEN_TO_BE_REPLACED