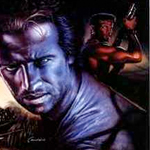 GUNMEN is a simple but appealing little buddy movie with goofy humor and a little more style than you expect, or at least I’m guessing it does from what you can see on the shitty cropped DVD. It takes place in the modern world with mercs in sweat-stained gear and machine guns slung over their shoulders flying around South America in helicopters, but it’s pretty much a western, even opening with its buffoonish anti-hero Dani (Christopher Lambert around the time of KNIGHT MOVES) sitting in a dirty jail cell watching a fly land on his face when Cole Parker (Mario Van Peebles around the time of FULL ECLIPSE) blows up the wall to bust him out. 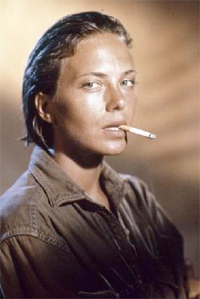 Well, he’s an ex-special ops badass working with the DEA, and he’s only one of the dangerous gunmen and gunwomen looking for Dani. We learn that Dani’s brother stole from drug lord Peter Loomis (Patrick Stewart during one of the last couple seasons of Star Trek: The Next Generation) and has since been killed, and that only Dani knows the location of the boat where the money is hidden. There are traitors among both the DEA and Loomis’s crew. The biggest threat is the group led by O’Malley (Denis Leary probly a little before DEMOLITION MAN and JUDGMENT NIGHT) and his female cohort Maria (Brenda Bakke, FIST FIGHTER, UNDER SIEGE 2), who has a captivating tough girl presence. She’s not a character we learn much about, but she sure works on a spaghetti western level.

It’s mostly a chase with shootouts, abductions, and also trekking-through-nature stuff like cliff diving, being spooked by tarantulas, and Dani refusing to cross a river, hilariously clutching his crotch and whining about a species of fish that ate his friend’s, as he calls it, penis. Cole and Dani keep comically turning the tables on each other, like when Dani uses the distraction of a poisonous snake to steal the gun from Cole. When Cole later realizes that Dani lost the gun going down a waterfall instead of being relieved that he’s no longer a hostage Cole yells at Dani for losing his beloved pearl-handled gun.

They need to hire a helicopter pilot, so they go to a seedy club to meet Izzy (Kadeem Hardison around the time of WHITE MEN CAN’T JUMP, near the end of A Different World). This is one of those ’90s hip hop cinematic time capsule moments I love because they walk in and Big Daddy Kane is on stage performing a song sort of about the movie. I think this is before filming his role in Van Peebles’ POSSE, though released after. They talk to these two guys at at a table who seem to be gangsters – one is Rakim, and then the other is revealed to be Eric B. (In a later scene they’re on stage, so I guess they were playing themselves after all.) Then two guys sitting at the bar turn around and it’s none other than Yo! MTV Raps weekday hosts Doctor Dré & Ed Lover, probly just before WHO’S THE MAN? (which also features Leary and Eric B).

Despite his hiring circumstances, Izzy doesn’t turn out to be a cool Han Solo type, and Hardison doesn’t get a huge amount to do. But he did get one big laugh out of me. During a flight, Dani and Cole open up to each other about their fathers. When they’re done they’ve clearly bonded and connected with each other, and this is an important turning point in a buddy movie, and then Izzy – who they didn’t realize was listening from the cockpit – starts yelling back to them trying to tell them about his father. 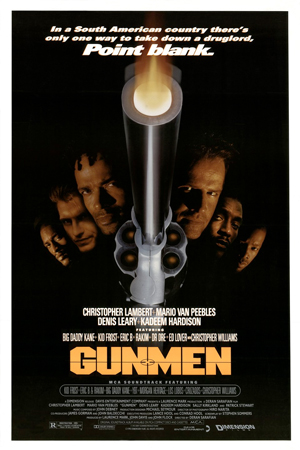 The druglord with his villa and stable of thugs, the sweaty atmosphere and the Leone-inspired style reminded me a little of the world of DESPERADO. And then I realized from the credits that there’s a song from Los Lobos and one from Cruzados (Tito Larriva’s band). I wonder if this influenced Rodriguez at all?

There are some nice little twists on action tropes. There’s the traditional scene where they go visit some connection who gives them their choice of weapons from a huge arsenal. But I think this is the only time I’ve ever seen it where the weapons provider is a woman! In fact it’s Sally Kirkland (BEST OF THE BEST, REVENGE).

The parts where the movie excels are the little character moments. Loomis is in a wheelchair and manages to be scary because of what his money and power makes people do for him. As long as it does. He’s introduced watching his men bury his wife alive for alleged cheating. So we get an idea where he’s coming from.

O’Malley (who of course has the mean smart asshole type dialogue you expect from Leary)’s greatest Just How Evil Is He? moment is where he murders a couple in front of their young daughter, then comes over to the girl, kneels down, touches her cheek and gently tells her she’s better off.

This also leads to my favorite scene, and maybe the most puzzling one. Dani finds the dead parents on the beach, with the little girl just standing nearby. He looks at her but then walks away. Then he stops and whistles to her, and she follows. Cut to a beautiful shot of him driving his motorcycle down a road, carrying the girl, powered by a Morricone-esque music swell. This is a good man! He is rescuing this poor orphan!

Oh, wait, no. He stops in front of an orphanage, hands the girl to some nuns, and drives off. Like he’s delivering food or something! Obviously it’s not his responsibility to raise a random child he finds on a beach, but it’s just really funny how the operatic style of the shot pumps it up as this amazing thing while he shows no interest in even saying goodbye to the kid, or “there there, it’s going to be okay” or anything like that. I have no idea if I’m supposed to think he’s great for doing this, or if I’m supposed to be laughing at his weird partial heroism, and that’s why I love it.

At the end there’s an ADR line where Cole reminds him to give money to the nuns, so I think someone on the production was worried it would seem bad. I kinda wish it was never mentioned again.

This is from director Deran Sarafian (DEATH WARRANT, TERMINAL VELOCITY, star of ZOMBI 3) and writer Stephen Sommers (who had only directed CATCH ME IF YOU CAN and THE ADVENTURES OF HUCK FINN at that point). It was produced by Dimension Films, and as usual they are not heroes in this story. They delayed releasing it by a year and a half, cut out five minutes, and later cropped it when they released it on DVD. (The original aspect ratio is apparently available on iTunes and a couple import DVDs.)

GUNMEN is modest but fun, a mix of familiar ingredients that somehow feel distinct. So thank you to everybody who sung its praises when I reviewed HIGHLANDER: THE FINAL DIMENSION (where Lambert got Van Peebles the villain gig because they enjoyed working together on this one). I should’ve seen it long ago but I think I was confusing it with Albert Pyun’s MEAN GUNS.

This entry was posted on Monday, July 1st, 2019 at 9:02 am and is filed under Action, Reviews. You can follow any responses to this entry through the RSS 2.0 feed. You can skip to the end and leave a response. Pinging is currently not allowed.