The story here is your basic trapped-in-a-spooky-mansion-during-a-storm yarn. A little girl named Judy (Carrie Lorraine, POLTERGEIST II and one episode of ALF), her dad David (Ian Patrick Williams, RE-ANIMATOR, ROBOT JOX, KING OF THE ANTS) and uptight step-mom Rosemary (Carolyn Purdy Gordon, RE-ANIMATOR, FROM BEYOND, ROBOT JOX, THE PIT AND THE PENDULUM, FORTRESS, STUCK) are driving somewhere in the woods or some shit, their car gets stuck in the mud, so they go knock on the door of the nearest gothic mansion.

It intentionally plays like a fairy tale. Rosemary is nothing if not a wicked stepmother – she even looks a little like the evil queen from SNOW WHITE. She openly hates Judy (and most people). She’s so mean she takes the kid’s teddy bear (her best friend, she says) and tosses it into a tree for no reason. And Judy’s dad doesn’t say shit about it, so fuck him too. This act of senseless cruelty does at least lead to a bizarre fantasy sequence where Judy imagines a giant Teddy growing teeth and claws and mauling the grownups. “Oh, Teddy,” she moans. He looks at her, his maw smeared in grue, and gives a comical shrug. 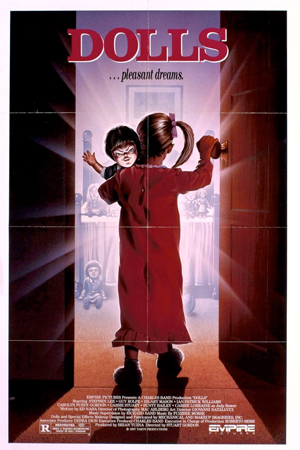 When nobody answers the door at the mansion the family break into a basement, where they are discovered by the seemingly-nice-but-also-kind-of-menacing old couple that lives there, Gabriel (Guy Rolfe, SNOW WHITE AND THE THREE STOOGES, MR. SARDONICUS, PUPPETMASTER III, 4, 5 and RETRO) and Hilary (Hilary Mason, DON’T LOOK NOW) Hartwicke. So there’s a certain Goldilocks or Hansel and Gretel factor there. But this fairy tale’s morality seems to have to do with the importance of childlike imagination. The visiting adults all suck because they dismiss Judy’s fantasies and hate dolls. Only Ralph (Stephen Lee, THE PIT AND THE PENDULUM), who also stays in the house after getting stranded with two hitchhikers, Isabel (Bunty Bailey, the girl from A-ha’s “Take On Me” video) and Enid (Cassie Stuart, SLAYGROUND, AMADEUS), is portrayed as a good guy, and it’s only because he has nostalgia for playing with toys as a kid.

At the end (SPOILER) the dolls let him live after “trying to decide if you’re an adult or a kid,” as Judy explains. He says “I’ve been trying to figure that out for years.”

I’m not the most grown of grown ups, but some of what is supposed to be charming about Ralph I find kind of embarrassing. He talks fondly about a childhood memory of his dad telling him that his toys came to life at night, and him staying up to see it happen. I mean, what kind of a dad tells a kid that, and what kind of a kid believes it, and what kind of an adult thinks it’s cute to wax nostalgic about being that dumb? I don’t know about you, Ralph.

But they are not peers. There’s a funny joke about Judy being a kid who doesn’t know anything. Ralph thinks wounds from a doll attack are rat bites. “My luck, they’re rabid,” he says.

Because Ralph is the closest thing to another kid for Judy to talk to, he’s the only one she can turn to when she notices supernatural shit, and the only one who is willing to hear her out. There’s a scene where she comes into his room at night while he’s in bed and he just acts like it’s normal, like he’s her dad or something, and then there’s a long section where he’s snooping around the house alone with this little girl, and it just seems so inappropriate, even though we know it’s innocent. I was actually relieved when Judy’s dad finally notices, calls Ralph a pervert and says Judy has to stay in his and Rosemary’s room. (It doesn’t help Ralph’s case when Judy whines, “I wanna stay with Ralph! He’s my friend!”)

Lest we think David is a good dad, though, he decides to punish her disobedience by threatening to “tear this doll to shreds!” and then trying to do just that. The worst part of it is what kind of a psycho punishes his daughter by destroying her doll, but the second worst part is that it’s a doll hand-made by, and on loan from, their generous host Gabriel. The third worst part is that the movie later indicates it’s a living human, now trapped in doll form.

Isabel’s style seems like a copy of early Madonna, but Enid’s seems like a precursor to Marla in FIGHT CLUB. Basically, they’re supposed to be some kind of punks, which, being 1987, meant they were gonna be up to no good. They seem to be leading Ralph on to think he might get with them, but really they plan to steal his wallet and car and any antiques they can find in the house. (Though Enid has some misgivings about these things.) This criminality may be what leads to their doom, or it may just be that Isabel shoved a bunch of dolls off of a mantel to put her boombox there.

Unsurprisingly the doll attacks (which start a half an hour in) are the best parts. Like CHILD’S PLAY a year later there are some effective uses of off-screen or barely-glimpsed scampering li’l bastards. They drag Isabel and bash her face against the wall and we see it partly with a point-of-view shot ramming the wall, pulling back, seeing the bloody spot, bashing again. Unlike PUPPET MASTER, which has a handful of doll characters with different gimmicks, this is a house full of dozens, maybe hundreds of dolls, they aren’t really distinct characters. But they have weird, bug-eyed expressions which work really well for creepy, sometimes funny closeup reaction shots to remind us that they’re watching and judging these assholes at all times. And you do sometimes see them move through puppetry or stop motion, coming after people with little knives and sharp BARBARELLA-doll teeth and shit. The makeup effects are by FRIDAY THE 13TH VII director John Carl Buechler, who’d worked with Gordon on his previous two films and whose ugly-little-creature work over the years includes TROLL (also director), GHOULIES, GARBAGE PAIL KIDS, DEMONIC TOYS and THE GINGERDEAD MAN.

It’s cool that (SPOILER) Isabel turns into a human-sized doll. But the weirdest part is when Enid is fighting a bunch of them and she smashes their porcelain faces, and they have slimy little heads on the inside. It looks like they’re little ghoulies or critters or something, they just wear doll parts as armor. But I think maybe it means they’re alive and the doll face is their skin. What we’re seeing is the living doll equivalent of skinless Frank or Julia in HELLRAISER.

It’s also like a fairy tale in that it’s a fucked up happy ending. Gabriel and Hilary give Judy a fake letter claiming her dead/dolled parents have decided to move away to another country and change their names and she has to go live with her mother now. She’s okay with this and promises to come visit the mansion on vacations.

After revisiting RE-ANIMATOR and FROM BEYOND and then seeing PIT AND THE PENDULUM (plus the sci-fi FORTRESS) it became clear that Gordon is a real-deal Master of Horror. He’s a well known name, and RE-ANIMATOR is pretty iconic, but I still think he’s hugely under-recognized considering the originality and high quality of his work.

That said, DOLLS is weaker than any of the others I’ve listed here. Some of it is small stuff, awkward things, like scenes where they’re stumbling around unable to see in the dark, but it’s shot in the not-very-dark. Or at least looks that way on the Blu-Ray transfer. But it’s mostly in the conception – an overall lazier idea, story, characters. They’re all just types, and they’re mostly people we’re not supposed to like, and I’m glad the young protagonist who we are supposed to like is not one of these way-too-precocious kids who talks like an adult, but I also have trouble relating to a whining little kid who thinks the killer dolls are fairies.

It’s not necessarily a bad thing that it’s so much simpler than his other movies, but it does matter that the characters are so basic and obvious, that their behavior is weird in less interesting ways, that the things they go through are much more generic. You’ve never seen a story like RE-ANIMATOR anywhere else, but you’ve seen this shit in a thousand movies, sitcoms, cartoons, etc.

Except for the teddy bear part. That kinda stands alone. But it’s the only thing to imply Judy is an interesting person and it happens at the very beginning.

But yeah, the dolls are cool as hell, and it’s certainly very good compared to many other Charles Band little guy pictures. Gordon hasn’t directed a huge number of movies, so I think I need to go through and review the rest of them before too long.

Bunty Bailey Carolyn Purdy Gordon Cassie Stuart Charles Band Ed Naha Guy Rolfe Hilary Mason Ian Patrick Williams John Carl Buechler killer dolls li'l bastards Stephen Lee Stuart Gordon
This entry was posted on Tuesday, October 24th, 2017 at 11:36 am and is filed under Horror, Reviews. You can follow any responses to this entry through the RSS 2.0 feed. You can skip to the end and leave a response. Pinging is currently not allowed.