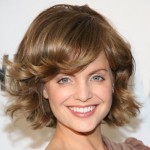 And this new one, STUCK, is an interesting idea. It’s inspired by that horrible case you may remember reading about a few years ago where a nurse’s aide was driving under the influence, ran over a homeless guy, and parked the car in her garage with him still stuck in the windshield. She left him there to die (it was originally reported as taking two days, which is how it’s portrayed in the movie, but from what I’ve read it was actually 2 hours). 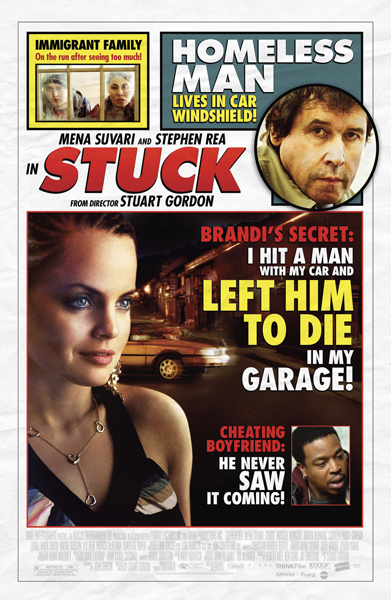 Stephen Rea – who would’ve seemed like a casting coup if he hadn’t recently played the corrupt cop villain in the Van Damme movie UNTIL DEATH – plays the homeless guy, and for his character it’s basically DIE HARD in a garage. There’s a very sympathetic setup of his character, you see how he gets kicked out of his apartment after being laid off, his application gets lost at the employment services office, a cop kicks him out of the park at night, and he happens to be at the wrong place at the wrong time. Then he spends the rest of the movie trying to get off this windshield, trying to honk the horn or grab the cell phone or get out and rig up support for his broken leg. Then he has to fight off the people trying to dispose of him. And somehow a gun appears. I always wanted to see “DIE HARD in the trunk of a car,” this might be as close as I get.

But most of the movie is from the point of view of Mena Suvari’s character and man, I don’t know. I think she’s supposed to be partly likable. The first thing you see her do is clean shit off of an old man and not complain about it, which shows strength of character. Unlike the woman in the real case she almost drops her victim off at the hospital. But she takes off when somebody might see her because she can’t jeopardize the promotion she’s up for.

Like in the real case she’s in a haze of ecstasy, pot and alcohol which causes the accident and the ensuing panic. But they also add the detail that she’s checking her phone when she runs him over, which automatically erases all sympathy. I don’t even believe in capital punishment, I’m still yelling for this bitch to fry.

I think the idea of making a movie about this is to take this unimaginable horror and try to explain it. What the fuck was this lady thinking? What would cause a human being to be so selfish and callous? The movie gives a few excuses but to me does not seem like a convincing portrait. I don’t believe this is really the lady that would do this.

Rea gives a very credible performance, Suvari is pretty good half of the time, otherwise the acting is a problem. Authority figures like the nursing manager and the employment agency people are over-the-top portrayals like the principal in the Twister Sister videos. And the conversations just never feel real. For example there’s a scene where Suvari and her boyfriend (Russell Hornsby) convince her friend (Rukiya Bernard) that the blood on the car is from hitting a deer. It should be painfully tense but instead it’s painfully unbelievable. These morons are terrible liars, worse than Jon Lovitz. Every time she asks a question they repeat the question, hem and haw, and then make up something ridiculous. But she’s not suspicious at all. As far as I can tell it’s not being played for laughs, although the boyfriend’s acting throughout the movie sometimes seems like he thinks he’s being funny.

On the positive side there’s a completely out-of-the-blue scene where Suvari beats up a naked woman, hits her over the head with a frying pan and literally kicks her ass out the door.

Other than the frying pan there wasn’t too much of this movie that worked for me. I guess there are a few effective suspense moments when people almost look into the garage. Rea’s gorey predicament is kind of disturbing at times. It’s funny when a cute little pomeranian type dog runs in and starts licking his wounds. And there were a few moments where I felt like it was working as a parable about self-absortion and man’s inhumanity to man and what not. She doesn’t care about this guy dying on her windshield just like nobody cares about him being stuck on the streets pushing his clothes around in a shopping cart. And there are actually neighbors who find out about him but are afraid to help because they have their own reasons for not calling the police.

There’s one important thing I haven’t mentioned yet. It’s completely superficial and yet a major problem with the movie: Mena Suvari has fucking cornrows. I’m not some hair expert, but in my opinion this is the worst hair that anybody ever tried to pull, ever. It really is hard to look at. I hate picking apart somebody’s physical appearance, but we’re all adults here, let’s just say what we’re all thinking: Mena Suvari has a giant god damn forehead. I’m sorry but the shit freaks me out. If that thing ever got loose it could go on the deadliest headbutting spree in modern history.

You know what, if she doesn’t want to grow bangs that’s cool. It’s her forehead, not mine. I should admire her for not giving a fuck what I think. But let’s set the forehead aside for a minute. I think we can agree that any white girl is gonna look ridiculous with cornrows. Right? Everyone knows that. But if you’re gonna go ahead and give them to a white girl anyway, for God’s sake the very last one you want to give them to is Mena Suvari. We as filmgoers do not want to spend 90 minutes staring at that hairline. This is a fuckin nightmare.

And the mystery of why the fuck you would give her that hair is complicated by the facts of the real case. In reality the driver didn’t have cornrows, but she was black. And this isn’t a story mainly about race but I think it would be naive to say race wasn’t a factor. I’m sure that him being white, as well as being a “bum,” is part of why she was able to shut off her humanity towards him and treat him as an embarassing problem she can get rid of. Actually, the way she got caught was by going to a party and laughing about running over a white man.

Do the cornrows mean Suvari is supposed to be black? Or symbolically black? Or down with black culture? Or a cultural appropriater? I’m not sure. I was too distracted staring at her hairline to really figure that one out. I guess I should just be thankful they don’t have her speaking ebonics at all.

I do think Gordon deserves credit for trying something like this instead of some formula picture. You probaly gotta make a couple of duds like this before you make another KING OF THE ANTS. I’m not writing him off yet.

You know, they probaly should’ve called it AMERICAN PIE PRESENTS… STUCK. And there would be some indication that Mena Suvari is playing the same character from those movies. And toss in a Eugene Levy cameo. That would’ve played alot better. Oh well, hindsight is 20/20.

Mena Suvari Stephen Rea Stuart Gordon
This entry was posted on Wednesday, September 3rd, 2008 at 4:48 pm and is filed under Drama, Reviews. You can follow any responses to this entry through the RSS 2.0 feed. You can skip to the end and leave a response. Pinging is currently not allowed.

One Response to “Stuck”