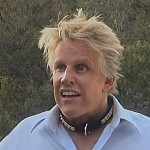 With an ingeniously stupid premise like this, there are a million hilarious ways to do a sequel. Instead they chose to do the old “monster attacks people making a horror movie” route already done much better in SEED OF CHUCKY. If you got the same premise for part 2 as another series had for part 5 then you should probaly do it better, right? Well, that wouldn’t be the Full Moon way.

I know, I know. What do I expect out of part 2 of THE GINGERDEAD MAN? The premise is ridiculous, the first one is barely even a movie, and this is part 2. But you’re forgetting, this is me you’re talking to. I love this kind of shit. I know in my heart that this can and should be a hilarious movie. But the best way to do it is more serious. The humor is already there in the premise. In order to make it funny you have to swallow your pride and pretend you think you are making a serious horror movie. But they don’t have the balls to do that, they gotta keep pointing out that they’re in on the joke. Hey guys, hey nudge nudge remember this is all jokes, right? Ha ha we’re laughing too you’re not laughing at us.

They also try to pull one of those pansy maneuvers where they’re supposed to be immune to criticism because the movie pre-emptively attacks anyone who would criticize it. The villain of the piece is not so much the killer cookie (who doesn’t appear often enough and is no longer voiced by Gary Busey, but at least has a higher body count than in part 1) but a guy from a websight with a name similar to Bloody Disgusting. This guy doesn’t like what the fictional Full Moon-like company has done with their fictional PUPPETMASTER-like series so he stalks them. The movie shows that he’s really just jealous because he wants to be a screenwriter but they don’t accept his unsolicited scripts. Also they show that he lives in his mom’s basement (very original). You have to wonder why, if critics like this are such losers, they bother to make an entire movie rebutting them. Doesn’t that make you an even bigger loser? And how exactly is it possible that the company behind a movie called THE GINGERDEAD MAN would be humorless enough to pull the same petty bitch move that M. Night Shymalan pulled in LADY IN THE WATER, or the late Michael Crichton when he named a child rapist in a book after a guy who didn’t like one of his other books? God rest his soul and all that shit but seriously, grow up, fellas.

The movie does make a slightly more original point, in kind of a forced SOUTH PARK kind of way, when the douchebag director character (who I think you’re supposed to like) explains that he just likes to make movies with his friends to have fun and doesn’t care about making them better. It’s a legitimate argument for Charles Band’s career, but kind of a shitty thing to say to those of us who, you know, just paid money to rent this movie. See, we had hoped you were trying to make a good movie. Now we know, but you should’ve told us before. Put a sticker on it that says “product only, not made for enjoyment.” Or just make the movie to show to your friends and available for free on the internet for anybody who needs to test their software to make sure it works or whatever use somebody might have for a movie that was not intended to withstand the test of somebody watching it.

The movie definitely doesn’t have a high opinion of its audience. For example, they use that old joke “Scorsese must be rolling in his grave!” and then, after a pause, have to explain to the audience that when they say “Scorsese” what they mean is the director Martin Scorsese, and that in fact he is not dead and that’s why it’s funny to say rolling in his grave. Get it? To be fair, they might be operating under the assumption that PASSION OF THE CRUST will be a classic 100 years from now and they want people to still understand that “joke.” That’s possible, but I think it’s more likely that they just think me and you are stupid.

Earlier this year Charles Band came through Seattle with the Full Moon Road Show. It’s a tour he’s done a couple times where they show clips from Full Moon videos, auction off puppets (mostly reproductions), and try to hock their crappy DVDs. The show was semi-entertaining and worth the cost of my ticket (free). The funniest part was the uncomfortable audience interaction portion where Band kept trying to get “chicks” (as he kept calling them) to take their shirts off not realizing that the people from the club were trying to prevent that from happening in order to protect their liquor license in puritanical Seattle. Somebody bought a stunt Gingerdead Man puppet that was used in this sequel. It was one of the few things people were actually bidding on, and Band seemed bummed that it only went up to like $150 or something. I’m still kind of jealous of the dude who got it because that would be a hell of a thing to have on display in your kitchen.

But the main impression I got from that show is that Band, in an increasingly difficult home video market, has found the solution of trying to become a brand name like Troma. He definitely seemed like the douchey west coast version of Lloyd Kaufman. But the problem with being the Cracked to Troma’s Mad Magazine is that the original’s not all that hot in the first place. Every TOXIC AVENGER fan has learned the hard way that the vast majority of movies with the Troma name on them are not actually watchable. Just trust me, FAT GUY GOES NUTZOID is not a funny movie.

Well, if that’s what he has to do to stay in business I guess I can’t judge him too much, and besides, I am on the internet so I’m probaly just jealous and live in a mom’s basement and what not. But it seems to me like Troma already gives us more than enough forced wacky b-movies, so I wish Full Moon could continue just being Full Moon. They were better when they were actually serious (PUPPETMASTER) or at least trying to keep a straight face (SHRUNKEN HEADS).

But of course I’ll watch part 3 when it comes out, because it’s about a killer gingerbread man. Charles Band wins.

Charles Band DTV Gary Busey
This entry was posted on Sunday, December 28th, 2008 at 3:51 am and is filed under Horror, Reviews. You can follow any responses to this entry through the RSS 2.0 feed. You can skip to the end and leave a response. Pinging is currently not allowed.

3 Responses to “Gingerdead Man 2: The Passion of the Crust”