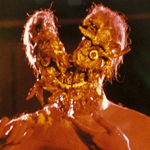 Jeffrey Combs stars in this one too, this time as Crawford, the more reasonable assistant to his groundbreaking professor at Miskatonic, Dr. Edward Pretorius (Ted Sorel, NETWORK, BASKET CASE 2), whose invention “The Resonator” uses a bunch of analog computers and Tesla-tech hooked to a row of tuning forks to create a vibration that stimulates our pineal glands, causing us to see beings that have been around us, unseen, all along.

Since it’s inspired by an H.P. Lovecraft short story these beings from beyond are mostly inspired by underwater creatures: glowing eels, sharp-toothed jellyfish, giant man-eating worm monsters, also some swarms of face-eating bugs and what not. (I wonder if H.P’s buddies ever made the mistake of inviting him to dinner and not telling him it was a sea food place?) Seeing these things is an awe-inspiring experience for everyone involved until the creepy crawly motherfuckers (CCMFs for short) notice them too and start to bite. Crawford turns the machine off, but not before some beast eats the good doctor’s head. 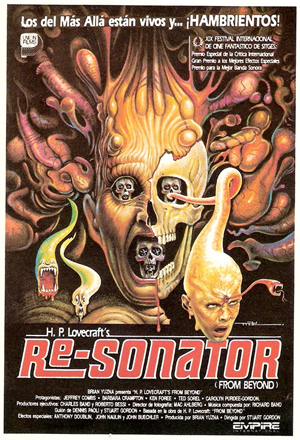 Crawford ends up in an asylum, the authorities quite reasonably assuming that he killed Dr. P and is nuts, all this shit he’s talking about monsters and other dimensions. He gets Sarah Connored, except he doesn’t start doing pull ups. He’d wither away while muttering to himself about eels if it wasn’t for this Dr. Katherine McMichaels (Barbara Crampton), the only one who seems open to his story, especially after she gives him a CAT scan and notices that his pineal gland looks like it has grown. So she arranges to have him bring her to Pretorious’s house to demonstrate the machine and prove his innocence. Although to be honest I think she cares more about the machine than the innocence.

So Katherine, Crawford and an ex-NFL police detective named Bubba Brownlee (Ken Foree from DAWN OF THE DEAD) return to the scene of the crime/head munch from beyond. Most of the movie takes place in this house, so it’s another one that could almost be a play. There they find not only the remains of the Resonator (which Crawford had wisely broken, and now begrudgingly repairs) but Dr. Pretorious’s S&M room, where Crawford has to sleep among pervy paintings and a variety of bondage devices. Like Dr. Hill in RE-ANIMATOR this doctor is a big ol’ perv, and his research is all about getting off. He confirms this himself when they turn the machine on and he appears to them, alive in the other dimension without his body. At first he’s just standing there buck naked, unashamed of his weird pattern of chest hair. Later he transforms into various bizarre lumps and piles of misshapen flesh.

From there it’s as simple as dealing with the consequences of this machine being in the house. Crawford and Katherine, having seen each other under the effect of the machine, turn weirdly horny for each other. Katherine seems addicted to the machine, and completely unleashes her inner sex freak that you never would’ve guessed was hidden behind her big glasses and shoulder pads when we first saw her back at the hospital. Every time they turn on the machine shit gets worse, and then Dr. P starts turning it on from the other side. From beyond. Even when they unplug it he figures out how to get it going again.

And you know how these things go. First you’re doing it with friends, socially. That’s fine, just make sure not to get to the point where you got your pineal gland sticking out your head like an antenna and you’re goin around munching organ specimens in the hospital and suckin brains out of eye sockets. Nobody wants to see that. You are valuable.

This shows that RE-ANIMATOR wasn’t a one-off, Gordon was interested in dealing with sexuality in horror, specifically sadomasochism. You see that in HELLRAISER too, that came out a year later. But I think Barker’s probly more in favor of it, he just uses it as horror because he knows it freaks people out. I think to him the horror is people are supposed to be attracted to it and not feel good about that. Remember in NIGHTBREED how nobody could resist fucking the porcupine lady. FROM BEYOND is more judgmental about it, at least through the character of Crawford. He tells Dr. Pretorious that he never knew pleasure, he just liked inflicting pain. He probly wouldn’t know how to go down on a lady, head attached or not.

The leads are all great. Combs gets to be a non-mad scientist, which he’s also good at. Crampton gets to be the one who fucks it up this time, but still sympathetic. And Foree is of course a favorite from DAWN OF THE DEAD, he’s never gotten enough big roles like this, especially in good movies. He was perfect for this role, physically imposing but friendly and laughing from the first time you see him. You want to see him get out of there. Also, the guy does a scene fighting a monster in see-through wet underpants. So you gotta respect his dedication to the role.

A bunch of FX guys get their names in the opening credits. The one I noticed was John Carl Buechler, since he’s the guy that directed FRIDAY THE 13TH VII. Man, that was such a good time for the FX-heavy horror movies. Movies like this and the Clive Barker movies and even the shittier Freddy movies were really trying to push the envelope and invent crazy new slimy, fleshy abominations. Of course I’m a huge fan of all these makeup effects and rubber puppets and what not, and I’d love to see more of them today, but that’s not what made it different. It’s that they were all trying to top each other, come up with something nobody had done yet, and freak people out. If we had more of that hunger for innovation and imagination in the digital world I’d like to think there would be fewer purists worrying about whether or not it was done in a computer.

The feel is pretty similar to RE-ANIMATOR, though it didn’t make me laugh as much. One big exception is Crawford’s perfectly timed “That will be quite enough of that!” after hitting the off switch on some insane extra-dimensional shenanigans. Also it’s kinda funny that Katherine comes to the house two different times and each time there is a different body outline on the floor. She always comes in after it’s been cleaned up.

Barbara Crampton H.P. Lovecraft Jeffrey Combs Ken Foree Stuart Gordon Ted Sorel
This entry was posted on Thursday, October 31st, 2013 at 12:49 pm and is filed under Horror, Reviews. You can follow any responses to this entry through the RSS 2.0 feed. You can skip to the end and leave a response. Pinging is currently not allowed.

28 Responses to “From Beyond”