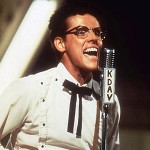 No one knows the origin of gingerbread, because how do you pin down something like that? I’m sure they could figure out who invented the McRib Sandwich, but not gingerbread. Some believe it came from the Eastern Mediterranean, and spread across Europe as soldiers came home from the Crusades. At least something good would’ve come out of the Crusades then. Wherever it came from, its ginger packs a powerful punch, so much so that throughout the 17th century you needed a license to bake gingerbread except at Christmas and Easter. 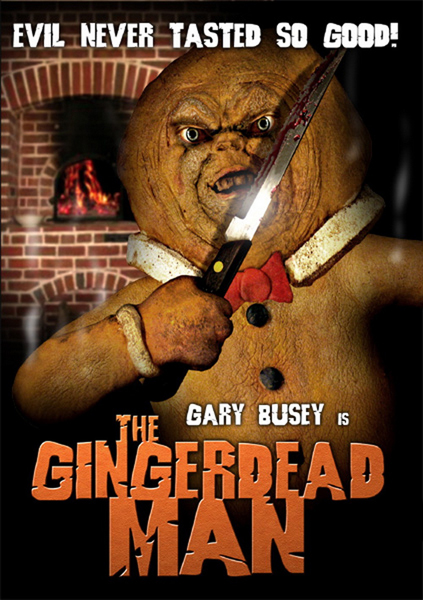 Perhaps the all time greatest gingerbread was found in Nuremberg in the early 1600s, where it was baked exclusively by an elite guild of master bakers known as the Lebkuchler. But even these highly trained artisans could never have foreseen THE GINGERDEAD MAN starring Gary Busey as the voice of the Gingerdead Man. The Lebkuchler knew that in fairy tales, the gingerbread man is a little guy who runs fast, always on the move to prevent being devoured by man or beast. But there is one gingerbread man who refuses to run. This is his story.

Charles Band, who directed THE GINGERDEAD MAN, is the son of Albert Band, who directed ZOLTAN, THE HOUND OF DRACULA. So B (or lower) movies run in the family, but Charles has his own spin on it: he is a perverted tinyphiliac. He’s been making shitty horror movies about tiny little fuckers since GHOULIES in 1985. If there was a low budget movie about killer dolls or miniature vampires or some type of little guy like that then 9 out of 10 this weirdo had a hand in it at least as a producer. This includes but is not limited to the GHOULIES series, the TROLL series, DOLLS, the PUPPETMASTER series, the SUBSPECIES series, DOLLMAN, DEMONIC TOYS, DOLLMAN VS. DEMONIC TOYS, the PREHYSTERIA! series (tiny dinosaurs), SHRUNKEN HEADS, LEAPIN’ LEPRECHAUNS and its sequel, THE CREEPS (midget Dracula, mummy and wolfman), THE SHRUNKEN CITY, BLOOD DOLLS, RAGDOLL, DOLL GRAVEYARD and EVIL BONG.

He didn’t do the LEPRECHAUN series though, or JACK FROST, or ELVES. Until now he has stayed out of the holiday oriented little guys. THE GINGERDEAD MAN doesn’t take place during the holiday season, but like its pastry namesake it is the perfect holiday treat for you and your family or church group. If they like crappy movies with funny premises.

The movie begins in turmoil as Gary Busey (not yet a cookie) is in the midst of an armed robbery at one of those charming old fashioned diners they have in small towns because they’re so backwards and unsophisticated. (or it might be a themed chain restaurant such as Johnny Rockets, who knows). Busey kills some guy, tries to kill a girl but misses, then he hears sirens, says “Oh, shit,” and runs off camera in a way that makes you think he should’ve left a little puff of smoke.

Next we find out that he got caught and executed off camera. The girl he didn’t kill, Sarah(Robin Sydney), now runs the independent Betty’s Bakery, across the street from one of those Wal-Mart style corporate bakery monoliths that we all fear. A couple days after the execution a mysterious cloaked figure leaves a box that says “Grandma’s Gingerbread Spices” at the back door of the bakery. This seems like an ordinary every day mysterious occurrence but actually it is an ingenious plan by Gary Busey’s mother to avenge Sarah for testifying in court against her boy. The mother has surmised that if she leaves these spices, Sarah will mix them into dough, then her co-worker will accidentally cut himself and spill a bunch of blood into the dough, then she will still use the dough to make one two-foot tall gingerbread man and then while she bakes it there will be a power surge which will (as all scientists know) bring life to the bloody, ashy, gingery dough.

So the gingerdead man comes out of the oven, gets a knife, tries to kill them. It is basically a siege movie where they are trapped in this one bakery. Imagine ASSAULT ON PRECINCT 13, except instead of some cops and criminals trapped in a jail, it’s some L.A. actors doing bad southern accents trapped in a bakery. And instead of a faceless army of gangsters attacking, it’s one puppet (sometimes a guy in makeup) of a gingerbread man that occasionally shows up and burps or mumbles to himself in Gary Busey’s voice. And then somebody makes a pun like “the Killsbury Doughboy.”

There’s really not much of a movie here. It’s only an hour long, and that’s including the long opening credits that I fast forwarded through. Gary Busey kills two people while in flesh, only one while in gingerbread. He does cover a girl in frosting (with cherries for nipples) but otherwise doesn’t do much of note.

That might not matter if it felt like a real movie. Sometimes a movie with a premise this ridiculous can be fun just by treating it with (ginger)dead seriousness. But this is Full Moon Video. It seems more like an episode of some horrible children’s TV show than a genuine independent horror movie. It’s supposed to be in Waco but they don’t even have any stock exteriors of anything that looks outside of L.A. The score is one of those awful non-stop circus music type keyboard deals they do on alot of worthless DTV horror garbage. The characters are all annoying cliches made deadly through bad acting, the stuck up mean girl being especially difficult to watch. The one exception is actually Ms. Sydney, who seems to take the role of the heroine very seriously. She actually does a pretty good job in the scenes where her character is emotional, and when she’s flirting with the 30 year-old twentysomething with the eyebrow ring her eyes look like she’s truly infatuated with him. She will probaly go on to success on some TV show or something. You heard it here first.

Other than that it’s very plausible.

The funniest thing that happens is when a guy kills the gingerbread man in the most obvious way: he eats him. Or his head anyway. He really has to chew at it, and raspberry jelly gore comes out. The Gingerdead Man is surely the most delicious of all the horror movie slashers and monsters, although werewolves might not taste that bad, I’m not sure. Maybe leprechauns are good too, if they have some kind of minty shamrock milkshake type flavor.

But of course, just eating his sweet, sweet evil is not going to solve everything. The eater then becomes possessed by the Gingerdead Man. You would think okay, this killer Gary Busey has had his soul transferred into a cookie much like the serial killer Charles Lee Ray was transferred into the Chucky doll. Now a guy eats the cookie so the Gary Busey soul is transferred into the guy, right? The whole Gingerdead thing is over and the soul moves on to a new body, right? Nope, that’s not how it works. This guy’s face turns all evil and his skin turns a gingerbread brown. He’s possessed by a cookie! This is possibly one of the first three or four times this has happened on film so I at least give the movie credit for that.

I don’t regret seeing the movie, it’s short and it’s funny to see them try to pass this off as a movie. But with some elbow grease it could’ve been alot more fun. I would not be against a sequel, but they gotta get a better director and better production values for this to work. Even Charles Band movies, like PUPPETMASTER and shit, used to look like real movies back in the day. They were actually trying to make it work, none of this TV style POWER RANGERS bullshit. I want to see a group of soldiers on leave run into the Gingerdead Man. Or a cult of Gingerdead Men are living in the sewers of New York City. Or of course there’s always the Gingerdead Man in space possibility. Just get a professional cinematographer, a composer who does not own any keyboards, and pretend you’re really trying to scare me. And then we’ll talk.

p.s. Thanks to Tony Tibbetts for recommending this movie multiple times. And Charles Band, you have my permission to use the first 3 paragraphs of this review as the opening crawl or back of the DVD box for part 2. thanks bud.

Charles Band DTV Gary Busey Robin Sydney
This entry was posted on Wednesday, December 6th, 2006 at 3:48 am and is filed under Comedy/Laffs, Horror, Reviews. You can follow any responses to this entry through the RSS 2.0 feed. You can skip to the end and leave a response. Pinging is currently not allowed.

9 Responses to “The Gingerdead Man”