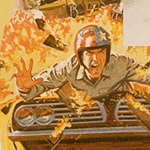 It doesn’t seem like it’s his passion in life yet, but he turns out to be good at it, leading the cops on a chase that predicts every episode of The Dukes of Hazzard ever made. But the payment plan has some problems so he moves on and finds his way into “the destruction derby” (same as a “demolition derby” as I always knew it), teaming with a guy he meets, Buddy Love, and going on to dominate the circuit.

Eventually they join up with The Circus of Death, a traveling daredevil outfit who tour around in a menacing caravan of white cars with crude skulls and crossbones spraypainted on the side. Dusty takes over, masters and improves on the “dive bomb” act, which involves going off a jump and crash landing on some parked cars. Something a monster truck would do, but without the advantage of monstrousness. 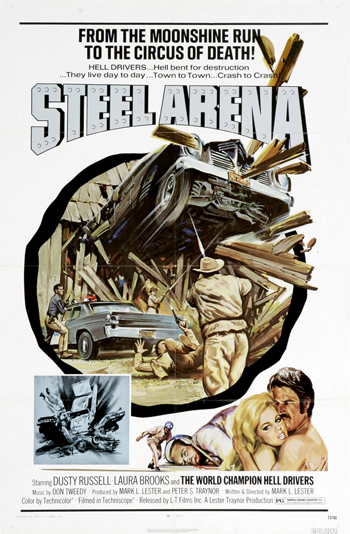 The guy who previously had the job, Crash Chambers, gets real jealous, and his anger is only increased by the cruel needling of Gene Drew, the owner and boss of the troupe. It’s a weird subplot because Crash is totally right – Gene is power-hungry and emotionally manipulative, building him up, then replacing him and rubbing his nose in it. But Dusty never seems to see it that way. He just says he’s better than Crash and tries to prove it, and then Crash does turn out to be a cheater willing to endanger people in his attempt to win. It feels like it’s missing the turn where Dusty gets screwed over in favor of the next young guy and sees it from Crash’s perspective.

Crash is credited as Bruce Mackey, so he must not be a real driver. According to IMDb he’d previously provided an announcer voice in THX 1138 and had bit parts in MAGNUM FORCE and FREEBIE AND THE BEAN before playing a teacher on The Kids of Degrassi Street. The same may be true of Gene Drew, who has three other acting credits – SWEET GEORGIA, TRUCK STOP WOMEN and BOBBIE JO AND THE OUTLAW – and, if IMDb’s not mixing him up with another guy, was art director for THE MUMMY AND THE CURSE OF THE JACKALS in 1969. But he’s playing himself in the movie (or at least using his real name as his character name), so that’s weird.

Whatever the deal is, Drew is the best part of the movie. He loves to give hot air speeches, tell stories about his adventures on the road, and emcee the events. At a big team dinner he makes a nice speech that praises Dusty, but then pushes him to risk himself even more, and also throws in taunts he knows will rile up Crash. He’s also casually sexist, most notably when he tells Dusty’s girlfriend Jo-Ann (one time actor Laura Brooks) to leave the junkyard because “girls aren’t allowed” and makes it sound like he believes he’s being totally polite and reasonable.

Not that Dusty treats her much better. He never objects to people excluding her, and when she storms out after his macho challenging of Crash he has no clue why. I had empathy for her the way you do some poor person at a party who you can tell is lonely and miserable but you never get a chance to talk to. And, having left her small town for this, she seems to think it’s the best life available to her.

The stunts are not nearly as impressive as the ones in DEATH CHEATERS, but it’s cool how this has bits of documentation of actual stunt shows, and the non-actors give it an authentic flavor. Though it’s a vehicle for these drivers it has a weirdly downbeat conclusion with multiple disastrous accidents right in a row. And you know me, I’m a sucker for movies where somebody’s plays themselves but gets killed (see also Redman in SEED OF CHUCKY).

Though it’s unexpectedly successful in its laid back southern fried indie feel, I would assume STEEL ARENA was made by one or two-off regional filmmakers barely heard from again. Wrong! This is the sophomore film of writer/director Mark L. Lester, who would go on to helm CLASS OF 1984, FIRESTARTER, COMMANDO, SHOWDOWN IN LITTLE TOKYO and many more. (He would also do STUNTS, with Robert Forster playing a stuntman.) I also noticed that the editor is one “David Peoples,” now known as David Webb Peoples, who co-wrote BLADE RUNNER, UNFORGIVEN, TWELVE MONKEYS and SOLDIER and also directed THE BLOOD OF HEROES. The destruction derby is an interesting place for those two to start.

This would be a good candidate for a cleaned up Blu-Ray release, especially if they could get Lester and/or Peoples in for an interview or commentary. Or at least a drive-in style double feature with some other car movie that has a little more bang to it.

David Webb Peoples Gene Drew Mark L. Lester stuntsploitation
This entry was posted on Friday, May 19th, 2017 at 10:35 am and is filed under Drama, Reviews. You can follow any responses to this entry through the RSS 2.0 feed. You can skip to the end and leave a response. Pinging is currently not allowed.