After seeing WAR HORSE I wanted to see something about a civilian horse, so I watched this 2002 animated cartoon movie about a horse running wild in the old west. I guess his name is Spirit. I guess he is a stallion. I guess he lives in one of the places that is called Cimarron. I’m not sure which one.

I looked it up and it seems like the early 2000s was sort of a shifting time for the animation, due to the post-millennial tensions or whatever. The Disney musical was beginning to lose its grip on feature animation. That company’s most recent features were the unpopular EMPEROR’S NEW GROOVE and ATLANTIS: THE LOST EMPIRE (not a musical). Meanwhile, other mediums of animation were beginning to have success (CHICKEN RUN, Academy Award nominee JIMMY NEUTRON [!?], SHREK, the Pixar movies, WAKING LIFE, ICE AGE). So it might’ve been too little too late when Dreamworks Animation tried to copy Disney’s ’90s look and feel but with some changes to the formula (PRINCE OF EGYPT, ROAD TO EL DORADO, this).

Maybe they could’ve tried using a style and subject matter that hadn’t really been done in animation, instead they figured it was daring enough just to move a few blocks away from feisty princesses, fairy tales and funny animals. Sure, they drew it in a style blatantly derived from what Disney had developed over the years so that most people probly didn’t notice a difference. But they made two bold choices: the animals would not talk, and it would not be a musical. 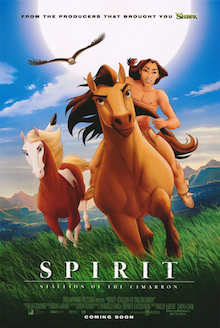 The main character is a horse, and Matt Damon narrates the movie in his point of view, but he doesn’t talk. No, he just smiles, laughs, has big expressive eyes and eyebrows, knows how to shake his head yes or no, or to gesture “come here” or “look out behind you,” or to roll his eyes at somebody he thinks is acting like an idiot. And he seems to understand most of what humans are doing and saying, and understands guns enough to go tackle a human that’s aiming one at another human he likes better. But he doesn’t straight up talk, and doesn’t wear pants, so it’s almost like a real horse!

And like I said, it’s not a musical, so everybody should be happy about that. That’s pretty cool.

Oh, one thing: it has a whole bunch of musical montages set to Bryan Adams songs with double meaning lyrics. For example there’s one called “Get Off My Back” while the horse is first being ridden. But it’s not a musical! They don’t lip synch any of that stuff. Totally tasteful.

Spirit is the leader of his horsepeople, much like Bambi or Lion King before him. But one day he sees some crazy shit he never saw before (a campfire) and starts nosing around some weird little pink critters (horse rustlers) and gets himself captured. He gets taken to a military camp where they try to train him, but he’s a natural rebel so he refuses to be tamed and gets tied to a pole without food by the villain of the piece, an asshole colonel or whatever. The boss guy with the hat.

While undergoing this isolation punishment the soldiers catch another rebellious spirit that they tie to a pole, but it’s not a horse, it’s a Native American individual. Eventually they escape and although it pisses off Spirit that this guy tries to tame him too he starts to feel sorry for him because the other humans in his human tribe make fun of him. Also Spirit falls for a girl horse. You can tell she’s a girl because her eyes are feminine and her mane is like girl hair. No lipstick though. No bow in the mane. Just a feather.

The horses here get painted up. Spirit refuses, probly because of his love for freedom, not because it makes him feel like a girl or a juggalo. Anyway it’s a clever idea because later we can distinguish some of the horse characters (horsachters?) by their markings. Rain received an honorary registration certificate from the American Paint Horse Association (APHA), which has registered more than 670,000 American Paint Horses to date. She is the first animated horse to be registered by this organization. I have no idea what those last two sentences mean, I cut and pasted them from Wikipedia.

Well I guess I shouldn’t lay out the entire plot but we’re pretty much at the climax where the fuckin white man is trying to build train tracks through where the horses live and committing genocide against their Native American allies. Both of these things piss off Spirit and in his struggle to escape them he ends up sabotaging their plans. He becomes a GUERILLA WAR HORSE.

One thing that’s unique, the script is not by an animation guy, it’s a guy named John Fusco who sort of specializes in westerns – YOUNG GUNS I-II, THUNDERHEART, later HIDALGO. Also CROSSROADS with Ralph Macchio.

It’s a pretty good story actually, I like the simplicity of it. I like the subplot about how he’s sort of friends with an eagle, which doesn’t mean they hang out and say funny things to each other, it just means the eagle will fly low and he’ll chase it around. So when he’s allowed himself to be domesticated to get down the girl horse’s pants (metaphor – like I said, they don’t wear pants in this one) and then sees the eagle fly over and can’t chase it you know that he’s thinking “ah shit, I’ve gone soft, I need to be free, I am Spirit, the Stallion of the Cimarron, which is synonymous with being a stallion who represents the spirit of the Cimarron.”

The movie even ends (uh, SPOILER here) with one of my favorite types of resolution, the Nod of Mutual Respect Between Warriors. Two men of opposing forces decide to at least temporarily cease hostilities because they have earned each other’s respect through battle. (In the case of BEYOND THUNDERDOME it’s one man and one woman, in the case of this one it’s one man and one horse.) They don’t exactly become Fight Brothers (like in BEST OF THE BEST 1-2 or ANY WHICH WAY YOU CAN) but they sort of become Long Distance Fight Admirers. They may or may not meet again, but they definitely won’t forget each other.

The animation deserves recognition on a technical level. It looks very impressive because the camera always swoops around and the characters look completely three-dimensional even though they’re drawings. The DVD menu helpfully explains how this was done through a shot progression: they first animated crude computer models of horses running, created the camera moves, then used that footage for reference to draw over. Smart idea. It seems to be put to use all throughout the movie, but especially in the first scene, which is like a long helicopter shot swooping through and showing all the land and characters. There’s obviously alot of computering going on but they’re mostly successful making it look like a three-dimensional water color painting. The best of old and new techniques. A cyborg. 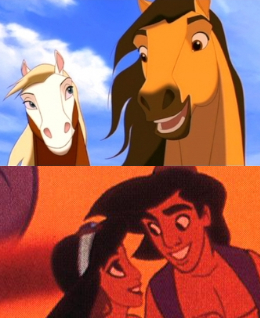 But man, it’s hard to get past the ridiculousness of horses making faces. I know I complained about the war horse in WAR HORSE seeming soul-less and horse-like, but I just meant that horses might not be the best protagonists, not that they needed to have eyebrows. In this case maybe the cartoon creators should’ve gone more soul-less, more like a real horse, less like a horse version of Aladdin.

I guess in a way the horses having human expressions and gestures is closer to reality than the traditional talking cartoon animal, but to me anyway it only emphasizes how real they’re not. If the horses just talked to each other I wouldn’t take it literally, I would assume it was symbolic of some other type of horse communication and buy into the fantasy. I’d understand that the people don’t hear it. Kind of like how Daniel Craig speaking English with reading glasses is actually him speaking in Swedish. But when they don’t talk and we’re pretending they’re real animals, and then they fuckin smile at each other, the shit creeps me out. I’d rather they just talk than drag me into this Unhorsely Valley. And the Bryan Adams songs are doing nothing to soothe me.

Then again, the narration is problematic too. They try to treat this as a real world of horses, it’s not like they have some secret society we don’t know about. They just have a herd with a leader, they don’t have their own human-style civilization like a RESCUERS or a HAPPY FEET or a SECRETS OF NIMH. So when Damon as Spirit narrates “I lay beside her that night, hoping – praying – that somehow she would be okay” I think wait a minute, this horse knows about praying? Is he praying to a horse God, or a human one? Knowing these cartoon horses he probly even puts his two front hooves together when he does it.

I mean if you think about it it really would be good to know what religion this horse practices, because the white man came to this land and forced Christianity on the Natives, it would be interesting to know if the horses picked it up or not.

There are alot of those type of questions. When Spirit says “They say the history of the West was written from the saddle of a horse,” or “They say the mustang is the spirit of the West,” I end up shouting at the screen “Who is they? How do you know what they say? Did you actually hear them say it? Did you read it in a book?” These animators try so hard to make it more real than your usual cartoon, but it still brings up weird CARS type logic questions.

But I guess I can’t complain, I sort of got a kick out of how wrong it was. If smiling horses make you smile, check it out. Maybe turn the sound off.

Dreamworks Animation horses Matt Damon
This entry was posted on Sunday, February 5th, 2012 at 1:10 am and is filed under Cartoons and Shit, Family, Reviews. You can follow any responses to this entry through the RSS 2.0 feed. You can skip to the end and leave a response. Pinging is currently not allowed.

19 Responses to “Spirit: Stallion of the Cimarron”