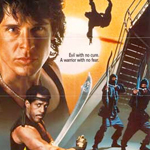 Well, up until now these French waver films and these ninja movies have been virtually indistinguishable to the layman. But we now finally – finally! – have come to a major difference between the American Ninja Joe Armstrong and the 400 Blowing Antoine Doinel: Joe’s not even in his part 3. Instead the story centers on a different American Ninja, Sean Davidson (first timer David Bradley, later of AMERICAN SAMURAI). The connection is Steve James as Curtis Jackson, who’s still relegated to the role of unquestioningly loyal friend and backup who shows up with a Rambo headband for the climax. At least he gets top billing this time.

That forced me to wonder: has Curtis really been the Antoine Doinel character this whole time? Was I being racist by assuming it was Joe? I think Joe has stronger parallels in his background and criminal record, but here Curtis is, like Antoine in STOLEN KISSES, fresh out of the military, on the prowl for beautiful women, and drawn into a mystery. But he probly wasn’t dishonorably discharged, he doesn’t try to make any of the relationships serious, and his mystery involves a private island where a guy called The Cobra (evangelist turned actor Marjoe Gortner) is creating some kind of virus to turn people into killers or something. To sell to a terrorist I believe?

We do see the ninjas doing some training rituals (with great percussive scoring by George S. Clinton that foreshadows the sound he’ll develop for MORTAL KOMBAT). They don’t have a full training camp, but you can see in the photo below that their arena is pretty impressive as it includes blue ninjas and flags and stuff. Still, the Cobra’s plan seems less ambitious than the robo ninjas of Blackbeard Island.

They do have a symbol though. Blackbeard Island ninjas had the lion symbol, these guys have a pretty respectable cobra insignia: 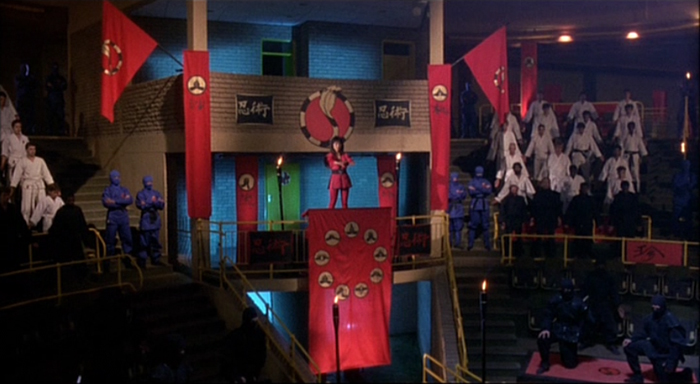 Sean is a famous martial artist, he’s been on the cover of magazines. He, Curtis and a wimpier guy named Dex (Ivan J. Klisser, AMERICAN KICKBOXER 1) meet in line at the airport or somewhere and instantly become friends who will spend the whole trip together. They’ve been invited to the island for a competition, supposedly. Sean’s opponent, Joe Simpson, is played by an uncredited John Barrett, later the lead of the aforementioned AMERICAN KICKBOXER 1. But it’s all a con to pick the best fighter to give the virus to. Sean became an American Ninja after his dad (Eckard Rabe, CATCH A FIRE) was shot to death in front of him during a robbery of the gate money at a karate tournament. So his dad’s buddy Izumo (Calvin Jung, ROBOCOP, LETHAL WEAPON 4) trained him in ninjitsu (there is a childhood ninja training montage during the opening credits, honoring the tradition of the flashback in part 1). 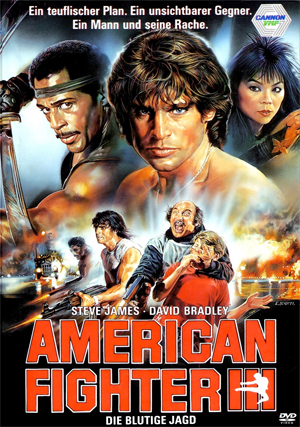 Coincidentally the guy who killed Sean’s dad is now General Andreas (Yehuda Efroni, THE DELTA FORCE, THE OMEGA CODE), who’s on the island to see a demonstration and buy the virus for terrorism purposes. The weird thing is it’s never mentioned in dialogue that this is the guy who made Sean an orphan. The only way they acknowledge it is by having little flashback shots cut into the scene where Sean guns down the General (a scene that is not the climax). I really wonder if they decided to do the robbery/father-killing prologue after filming the rest of the movie.

Sean figures out that something’s up when he sees his mentor Izumo getting abducted. He chases after him and fights some guys but fails to find out what’s going on, and none of the authorities take him seriously when he tries to report it.

When he sees someone flying an ultralight he decides that’s the way to sneak into The Cobra’s compound. So he, Curtis and Dex break into somebody’s garage, steal two ultralights and a truck and head for the place. But Dex’s engine isn’t working so there’s a drawn out scene of him carefully crash landing on the back of the truck.

Curtis and Dex park nearby and wait while Sean lands inside the property. It’s weird because after all that trouble it really seems like he could’ve just climbed the fence. Anyway he sneaks in, watches a ninja ritual through a skylight… 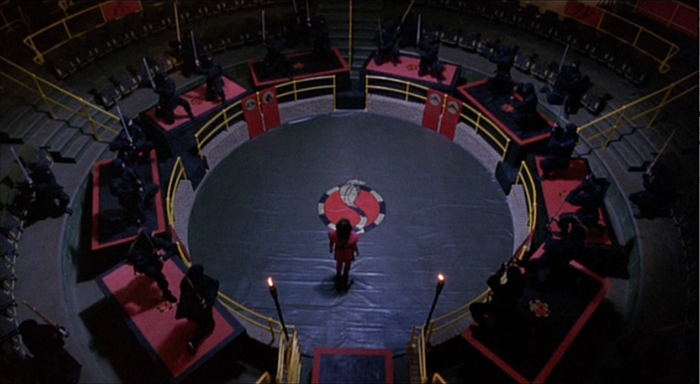 …beats up a bunch of ninjas, but gets drugged and locked in a cell, as is the tradition of American Ninjas. The next day Curtis and Dex are still waiting outside next to the truck!

Did they get any sleep? Did they eat anything? Did they brush their teeth? Did they change their underwear? I would be less patient.

The Cobra’s lead ninja is a woman, Chan Lee (Michele Chan, Hotel). Luckily she shows up and offers to help Curtis and Dex, otherwise they’d still be waiting there to this day. She seems to have been misled to think the virus is a cure, and now that she’s caught on she’s trying to help the good guys. 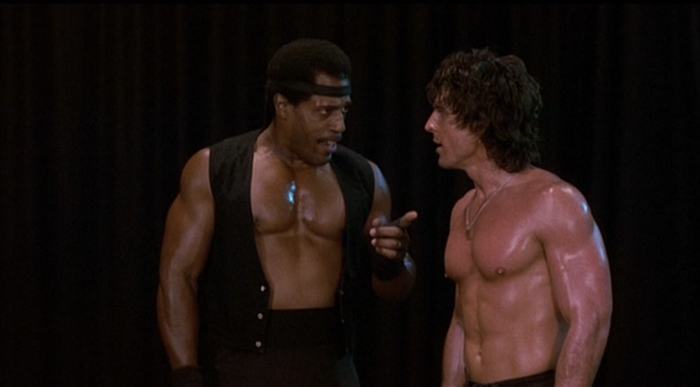 In the process of trying to solve The Case of the Friendless Shoe Store Owner in STOLEN KISSES, Antoine Doinel meets Mrs. Fabienne Tabor, falls for her even though they shouldn’t be together because she’s married, they share knowledge of Balzac works and have a booty call. Similarly, Curtis meets Chan Lee, hits on her even though they shouldn’t be together because she’s supposed to be working for The Cobra, and they share a love for martial arts. Like Antoine, Curtis is not very enlightened about how to treat women, so he keeps calling her “sweetheart” and “ninja baby.” He seems to mean them as innocent terms of endearment. She doesn’t seem to take offense.

Another female character is the Minister of the Interior’s secretary (Adrienne Pierce, LETHAL WOMAN, BLAST), who comes to have a word with The Cobra. She seems to know too much, so when she leaves she gets followed and then chased by a car of The Cobra’s men.

But somehow the secretary is really good at evading them and runs them off the road so that they crash and explode. She laughs and pulls off her mask and wig. NINJA TRICK! She is actually Chan Lee. 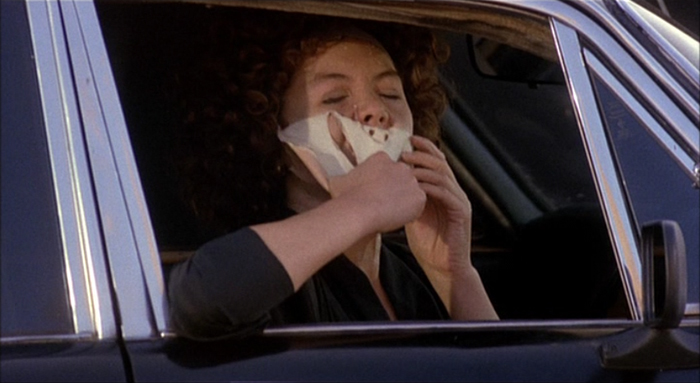 What I don’t know is, did she disguise herself as the secretary, who actually exists, or was the secretary a trick the whole time? Is that one of Chan Lee’s characters, like Borat is to Sacha Baron Cohen? I honestly don’ t know which it’s supposed to be. We do find out that Izumo was never on the island, that was just Chan Lee in disguise to lure Sean in. Seems like more trouble than necessary, but if you or I were that good at disguise we’d be overusing it too. I can get behind it whether it’s just to show off or truly to express herself through the disguise arts.

Now that Sean has the virus he forces Dex to make the zombie movie vow, that he will kill him if he starts to turn. But he’s actually able to overcome the virus by doing that meditation/hand signal thing that the first American Ninja did. It causes his body to glow and his veins to pop out as he remembers Izumo saying “Mind and soul over the body.”

Gortner’s part is bigger than his “special appearance” credit implies. He’s as much of the lead villain as any of the other AMERICAN NINJA lead villains. That’s not to say he pours his heart and soul into the role, though. I wouldn’t say he summons the Holy Spirit and speaks tongues to the Lord of acting. And I wouldn’t say he casts the Devil of not-great acting from the movie. But it is kind of an appropriate role for him because he’s basically pulling a scam, and also he gets to do a presentation which certainly draws on his vast public speaking experience. 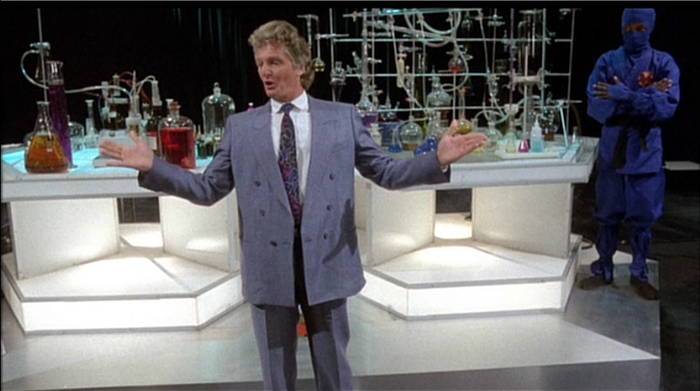 And we know from the documentary MARJOE that he’s used to making speeches in weird settings, surrounded by colorful characters, to make some quick cash, even if he doesn’t feel too good about it. I bet he felt right at home, even though they gave him a suit that kinda looks like that funny oversized one David Byrne used to wear.

In the end Sean goes to the lab and beats the shit out of The Cobra. So if you ever went to a revival meeting and got fleeced by Marjoe Gortner you will enjoy AMERICAN NINJA 3: BLOOD HUNT. 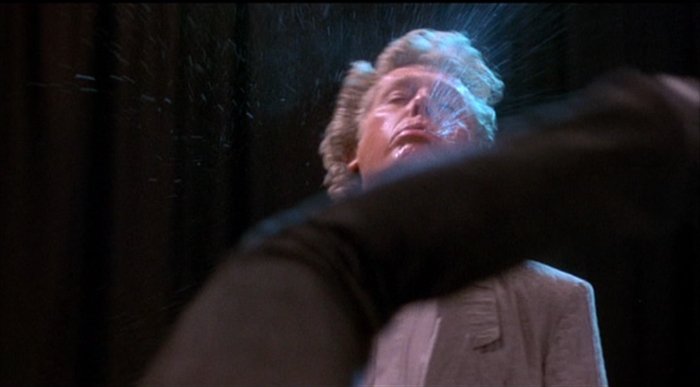 Parts 1-2 director Sam Firstenberg had left the series by this point. That year he did RIVERBEND, the rare movie with Steve James in the lead. His replacement is South African director Cedric Sundstrom, who had done the women in prison movie CAPTIVE RAGE starring Oliver Reed and Robert Vaughn. He and his brother Neal Sundstrom (HOWLING V: REBIRTH) had gotten their feet in the door doing second unit on Cannon movies like KING SOLOMON’S MINES and GOR II. The script is by part 2 writer/villain Gary Conway. At times it seems like he took that script and just crossed out different things and wrote above them.

Note 1: I don’t know what the fuck a “blood hunt” is in the context of this story.
Note 2: BLADE II was almost subtitled BLOODHUNT as well. In fact, somehow that subtitle made it onto the tickets when I saw it. Double in fact, I discovered I have the proof from two different times I saw it: 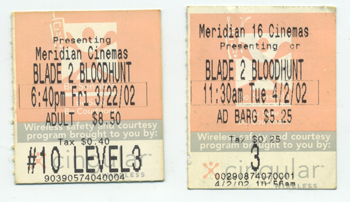 This entry was posted on Thursday, May 26th, 2016 at 11:17 am and is filed under Action, Martial Arts, Reviews. You can follow any responses to this entry through the RSS 2.0 feed. You can skip to the end and leave a response. Pinging is currently not allowed.