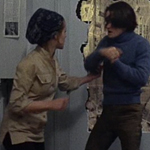 While THE 400 BLOWS was groundbreaking for being kinda naturalistic, this one reminds me of modern quirky French movies with their cute little gimmicks and ensemble of different funny characters who poke their head out of windows to get involved in conversations and stuff. Early on there’s a trick where Antoine is soaking the stems of white flowers in red dye, the camera pans up to a guy talking to him and when it comes back the flowers are now bright red. It’s like a simple magic trick. I like it.

Christine is even prettier than before and so happy with Antoine that she grabs and kisses him in the wine cellar where he stole that kiss in STOLEN KISSES. She’s kinda adorable when she’s being goofy, like when he has her close her eyes for a surprise (he brought home a library ladder, something that is cool to him, not her, she doesn’t have a ladder fetish) and she peeks and seems real proud of her sneakiness. 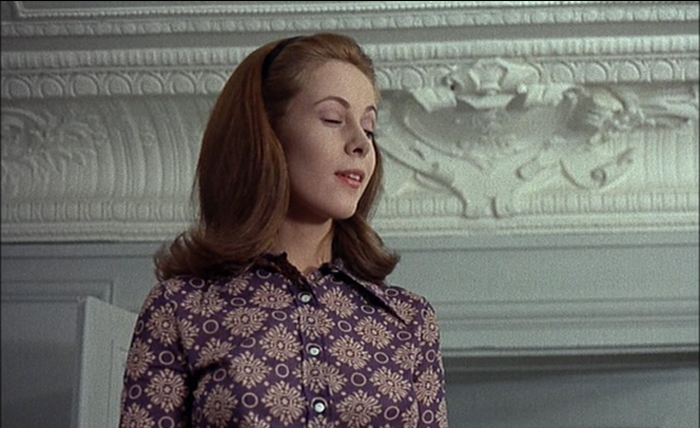 Like all the movies in this series it’s very episodic, with a bunch of different threads. There’s a whole thing about Antoine and Christine not being comfortable asking people for money. She has a student whose mother always forgets to pay her, and Antoine gets mad and acts like he’s gonna be the bad cop about it. They make a whole plan to signal him by playing a certain song so he can play mob enforcer. Instead he uses a passive aggressive method to remind her and then loans the money to some asshole he knows who he runs into on the street. There’s a funny running gag about how every time he runs into the guy he’s like “Hey Antoine, I owe you 10 francs, right? Loan me 20 and I’ll pay it all back at the same time,” and then “Hey Antoine, I owe you 20 francs, right? How ’bout you give me 50 and I’ll pay you back all at once.” He falls for this until it’s “I owe you 100 francs, right?” at which point Antoine says “No, that’s somebody else” and flees the area. 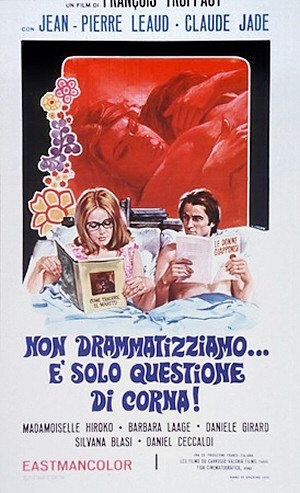 Christine is obsessed with Nureyev kinda like Antoine is with Balzac. She buys a poster of him, and Antoine seems maybe a little jealous. There’s a good part where she’s mad at Antoine and pulls his photo out of a frame and Nureyev’s is behind it. Later she actually gets Nureyev’s autograph – a dream come true – and Antoine’s snobbish response is, “Frankly I find that very provincial, bothering some guy backstage who’s just danced for two hours.”

Dude, you had a shrine to Balzac. You almost burned down your apartment for him. If he was alive you’d be camping out by his house waiting for him to come out. You’d be getting his autograph, giving him a copy of your book, telling him about your love life.

There’s a reference to ANTOINE AND COLETTE when Christine teases Antoine about being still obsessed with “the girl from the music concerts.” He doesn’t fully deny it.

Antoine is pretty into his flower job, getting creative about different ways to dye the petals. But then he gets a better paying job at an American architecture firm through mistaken identity. The boss reads a letter of recommendation from another applicant who was in the bathroom when they went to get him and they accidentally got Antoine. That shit never happens to us. Only to Antoine. We’re never the guy that gets the job, we’re the guy that had to take a piss real quick.

I don’t know why the letter was necessary, though, it’s not like the job required experience. He just has to pilot a remote control boat through a miniature model. Good work if you can get it.

Christine’s parents are still big in his life – he says he fell in love with her parents as much as her – and they buy the couple the apartment next to them so they can take out a wall and have a bigger place.

Do you think this inspired the famous scene in THE SHINING? 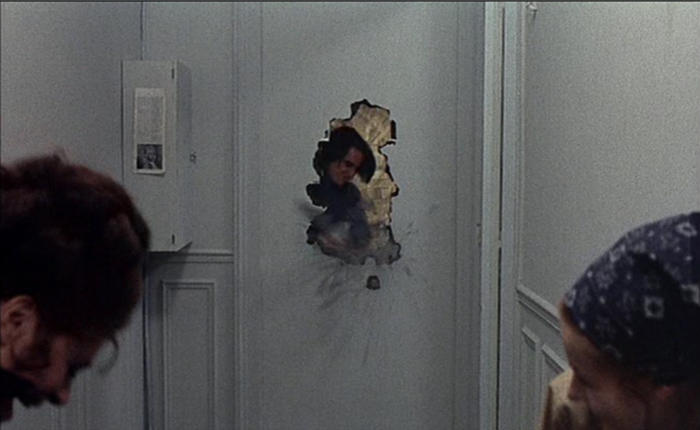 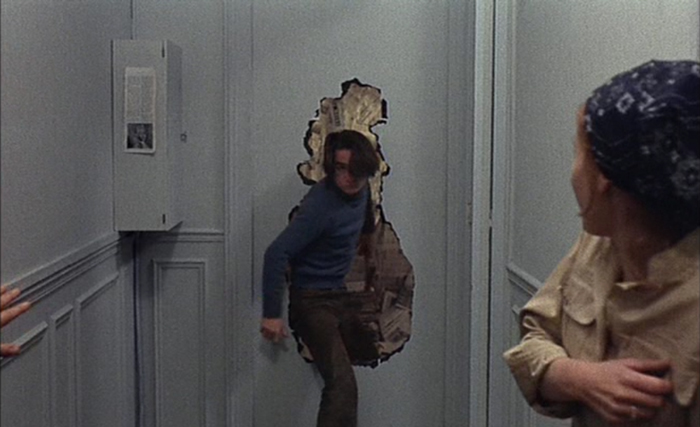 There’s a good joke where he walks Christine to a building and she won’t tell him why she needs to go there. He sees signs for three different businesses on the door, one of which is a gynecologist. He leaves her and he’s walking past a billboard with a baby on it and all the sudden he realizes OH SHIT and runs back to find her. 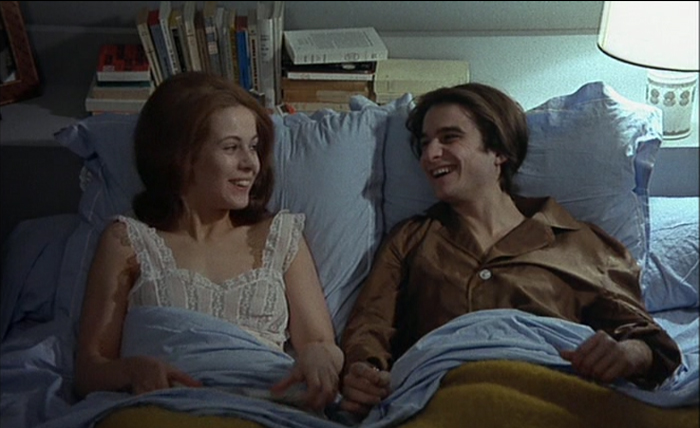 They have alot of laughs together and it’s a very sweet relationship until he reverts to his true nature of being a dick. It really comes out the same time the baby does. He’s not there for the birth and seems to think he’s a great human being for coming by and planning to stay with her that night. A photographer comes in to take a picture of the new family, and Christine’s too tired and wants her to come back later, but Antoine says “I’m not tired” and gets a picture of just him with the baby, which he later displays by the bed at home.

Even worse, he tells the hospital the name he chose that Christine didn’t agree with, and gets it on record as the kid’s name. Asshole.

Still, they have some good times. They feed each other baby food and watch TV. They talk about the first time they kissed, how he can sense when someone wants to kiss him. Then, of course, he meets a Japanese lady named Kyoko (fashion model Hiroko Matsumoto, credited as “Mademoiselle Hiroko”) at work, becomes obsessed with her, can sense that she wants to kiss him when he figures out an excuse to go to her apartment. Not good.

Throughout the series, Antoine is always a sucker for the unattainable exotic beauty. The tall women he sometimes dates, the stranger he followed on the street until she got a cop, the English speaker who’s married, even the hookers when he was too young, and now the Japanese visitor while he’s married. It’s not surprising that when he finally has a relationship with one, cheating with Kyoko, he kind of ANOMALISAs her. He worships her so much that he believes Christine should understand his affair with her. The dumbfuck tries to argue “If she were just another woman I could understand you being jealous. But Kyoko is another world.” Oh yeah, the old “hey baby, she’s not another woman though, she’s another world” gimmick. That oughta work.

The way he gets caught is pretty great. Kyoko has roses delivered to him and doesn’t know they have little love notes hidden between the petals. He throws them in the garbage, but a neighborhood kid sees them and carries them up to Christine, so Antoine fronts like he got them for her.

Later, in a sudden unexpected bout of Gondry-esque animation, the flowers open up and the notes fall out. When Antoine comes home this is what he sees: 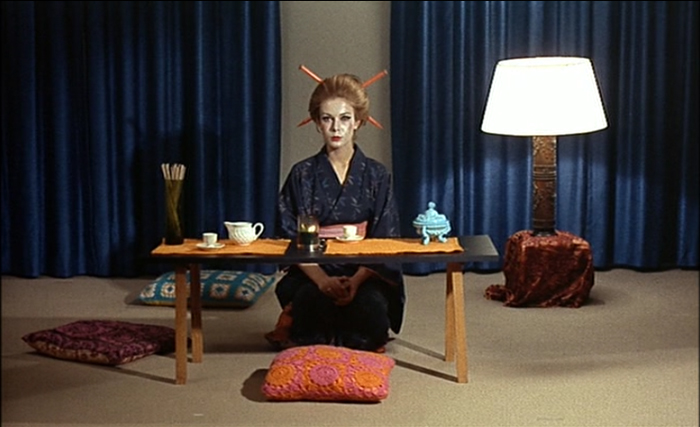 And then she’s back to normal so I guess it’s probly not literal. I prefer to think it is, though. That’s a hell of a way to confront him, Christine. Good effort, good imagination, good job.

Things get messy. He has to sleep on a mattress in another room, then move out. Seeing the baby is his only excuse to see his wife. Also he’s decided to write a semi-autobiographical novel, so he is completely insufferable and Christine cuts him off for now. She says she loves him but he has to go the fuck away and not talk to her because come on dude, seriously. Not worth it.

Of course he goes to live with his Japanese lady and now that it’s not cheating he has completely lost interest. After a while he’s able to have a little more friendly relationship with Christine and he complains about how much he hates being with Kyoko. Christine is amused by his bullshit. She offers sarcastic sympathy: “I feel sorry for you,” and they laugh. 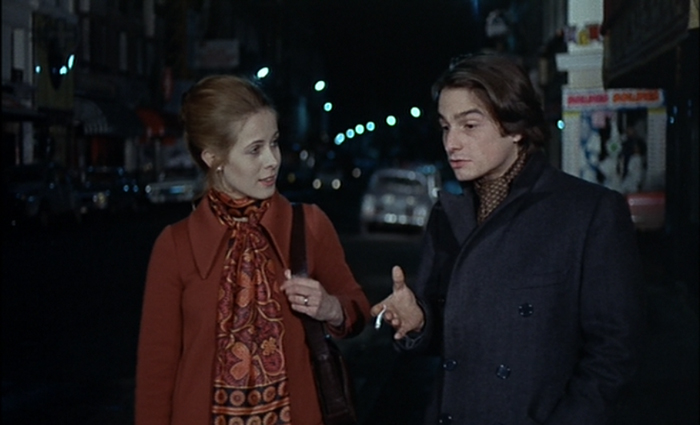 It’s bittersweet because they’re having a good moment together and she likes him but she knows he will only lead to more pain. Still, after he repeatedly interrupts dinner at a restaurant with Kyoko to call Christine and complain about how boring it is, she makes the total chump move of taking him back. A happy ending, I guess.

One could argue that this is more Cannon-esque than the other ones, because of the fight scene. 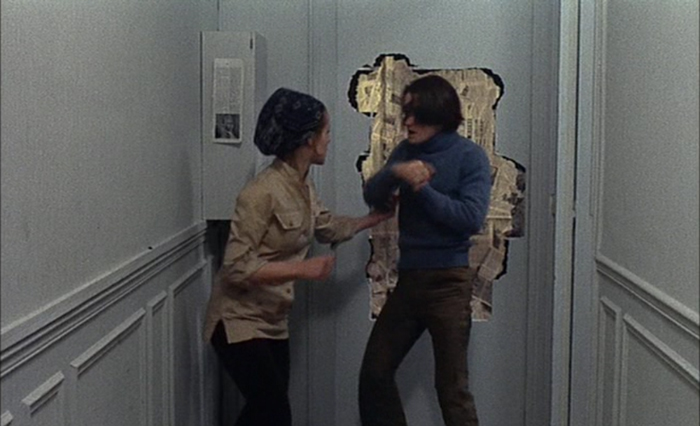 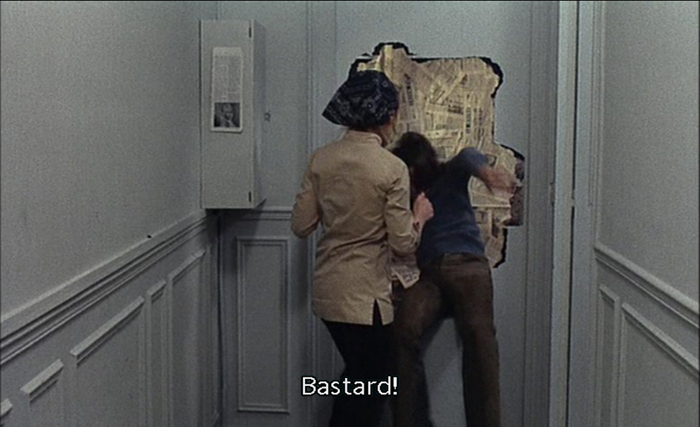 Also, it has cool end credits. 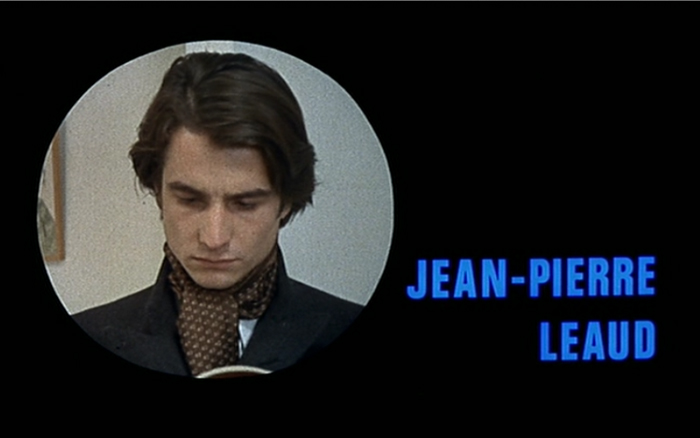 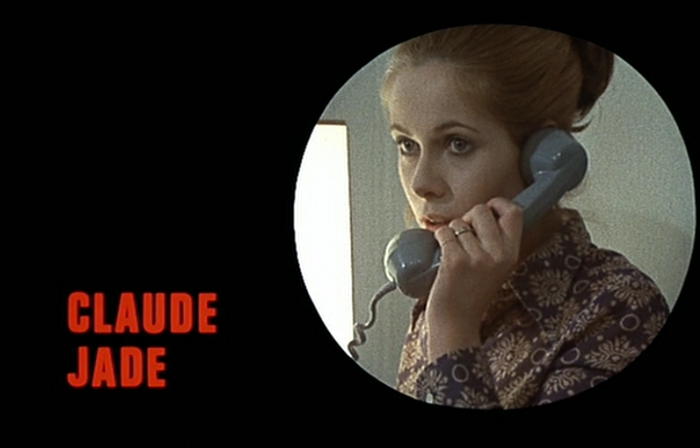 Francois Truffaut French New Wave Mademoiselle Hiroko
This entry was posted on Monday, May 30th, 2016 at 12:19 pm and is filed under Drama, Reviews. You can follow any responses to this entry through the RSS 2.0 feed. You can skip to the end and leave a response. Pinging is currently not allowed.