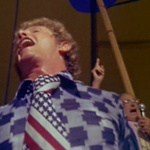 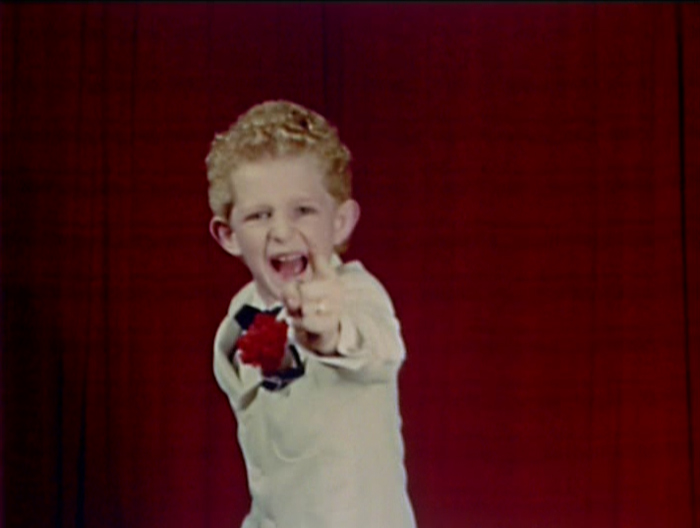 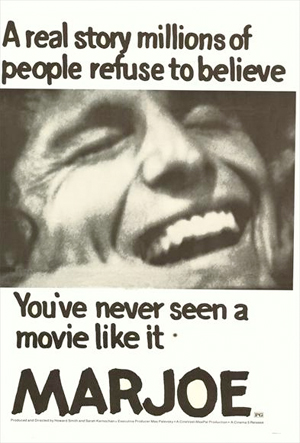 But at the time of the filming Marjoe (whose name is a combination of Mary and Joseph) is in his late twenties. When he was sixteen his dad took off with all his money, so he left for San Francisco to live with the hippies – who he didn’t tell about his past – and got a different view of the world. As an adult he came back to the family business and became a rock star of the revival tent circuit, but his Summer of Love values made him feel bad about it, so when filmmakers Howard Smith and Sarah Kernochan approached him about a documentary he agreed to do what wrestlers would call a shoot interview. He breaks character and reveals the tricks of the trade.

Marjoe talks to the camera about his childhood, how his mom coached and puppeted him, instructing him with signals that include exclaiming “Oh Jesus!” or “Glory to God!” as code words for different things like speeding up or slowing down. And it sounds like the Jackson 5 aren’t the worst comparison based on how his parents treated him, making him stay inside and memorize sermons, smothering him with a pillow or water if he screwed up.

Then we see him in his element, doing his much more polished adult act in a big tent full of fanning, fainting, cat-eye-glasses-wearing old ladies. It’s almost like a concert film the way it captures him at the height of his performing. Sweating, shouting, pacing, posing, bringing the audience up front, touching them. We see the stage craft, the way he gets in people’s faces, pushes them down, dazzles them with prop handkerchiefs, convinces them that Jesus is coursing through them, that they gotta speak in tongues or fall to the ground and convulse. 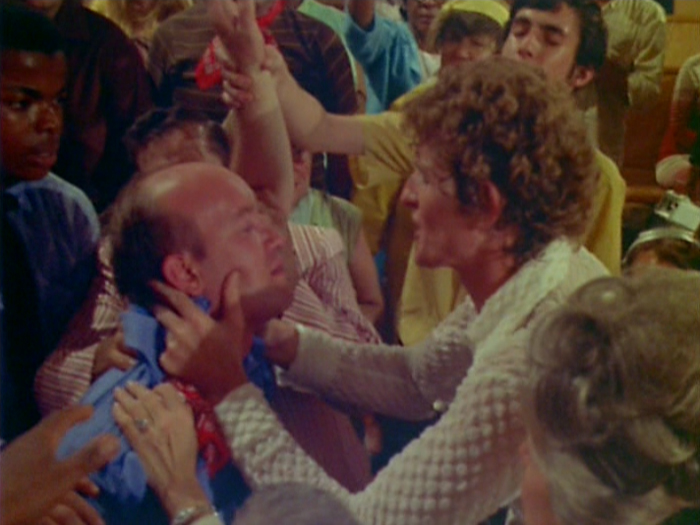 Also he sings and has a band and I always thought African Americans had more impressive church because the music is so much better (see THE BLUES BROTHERS for more information) but I gotta say, these white people make it seem fun too with their hillbilly soul before they bring in the heavy hitter gospel singers. And even in his preaching Marjoe contorts and poses like Mick Jagger, who he admits is a conscious influence.

I also gotta give it up for his fashion, including this bold American flag tie over loud polyester shirt: 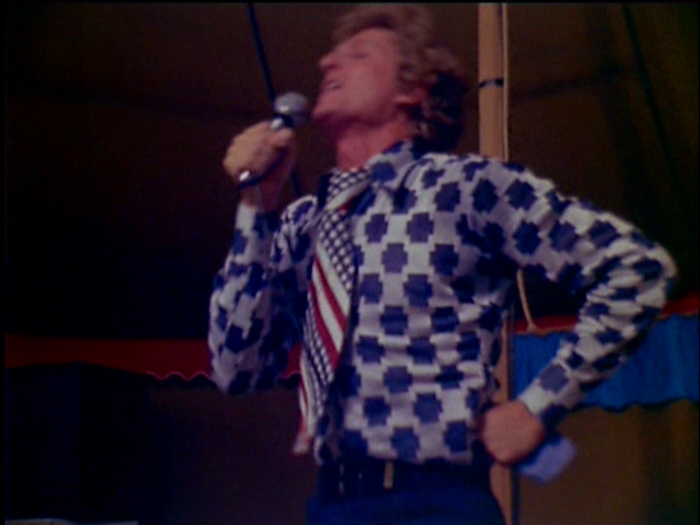 And I could go for this shirt with stars embroidered on the collar: 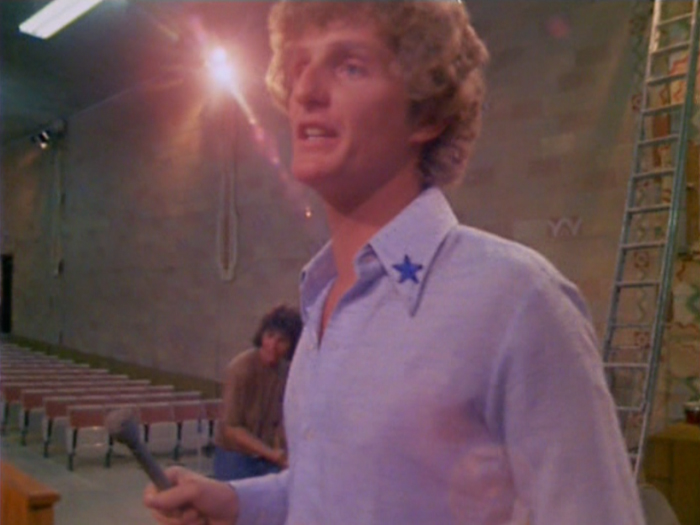 Occasionally these sermons cut away to Marjoe sitting around with the crew, telling his story and talking about what’s going to happen, to get them ready to film it. It’s a bunch of long hairs laying around smoking cigarettes and laughing as he explains his different tricks, how people react. “90% of it is psychosomatic.” 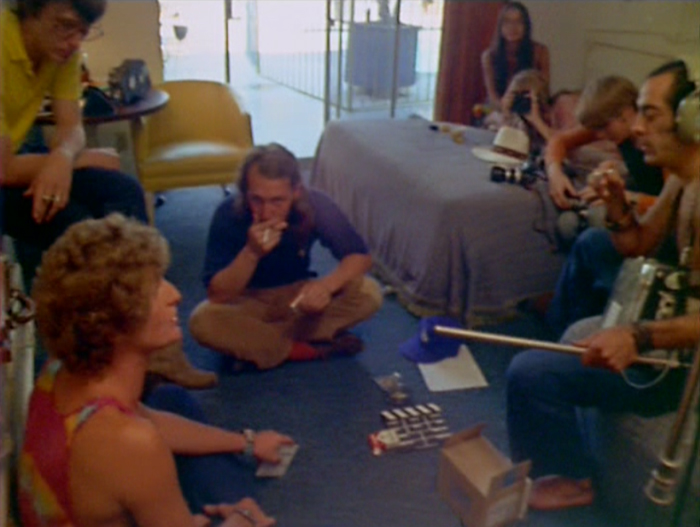 He’s sitting cross-legged on the floor wearing sandals and a tie-dyed tank top, he seems like a different guy, a cool guy that gets it, you know? But maybe it’s just another side of his charismatic powers. And there’s something smarmy about the knowing way these kids laugh about it. Ha ha, those rubes. You really took their money.

And I’m pretty sure he uses it to hit on women. This young lady seems as charmed by his conman stories as the old ones are moved by his Jesus powers. 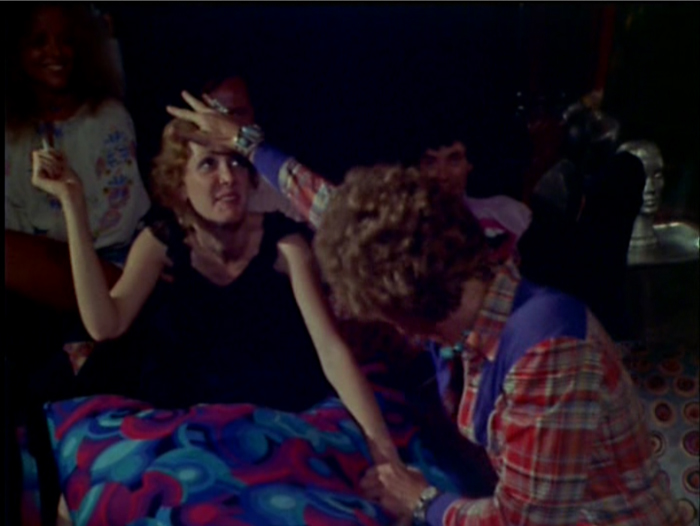 It’s quite a novelty to feel like you’re hanging out with a dude who does that type of preaching and he’s just a regular dude and he can do some of it for you and laugh about it. There’s a scene with him joking around with his girlfriend pretending to make a congregation pray for his dog:

“Now I want you to get out your dollars, we’re gonna give money tonight to kill a commie for Jesus. We’re gonna fight communism so that little dogs like this can be set free. Everyone, get out your money. Come on, get it out. Hallelujah!”

Because of the way so many documentaries work now, and the stuff they talk about, it seemed to me like it was leading up to some big stunt where he would reveal himself as a phony to the congregation or something like that. It made me nervous. But it’s nothing like that. The reveal is the movie itself, and the movie itself is not the high concept type of ones they do now, it’s the kind that just captures a world that you wouldn’t be able to experience otherwise, lets you experience it a little.

He’s decided he’s going to quit. He says if it was just about God he could get into it, it would just be a way to inspire people, but you have to do the you’re going to Hell stuff, and he doesn’t like that. “I enjoy getting it off on stage,” he says, “but I really wish I was getting it off as a rock star or an actor or something, which I have to get into.”

He was able to get into both. MARJOE won the Academy Award for best documentary and turned Gortner into a minor celebrity. The same year as the movie he capitalized by releasing his one music album, Bad But Not Evil (a quote from the documentary).

(Why didn’t the GREY GARDENS ladies get an album? They had to settle for a musical about them years later.)

The next year Gortner started his acting career with a part in the pilot of Kojak. His first lead role was the 1974 TV movie THE GUN AND THE PULPIT, a western where he fittingly plays an outlaw who pretends to be a preacher. Over the years he appeared in EARTHQUAKE, BOBBIE JO AND THE OUTLAW, THE FOOD OF THE GODS, VIVA KNIEVEL!, STARCRASH, plus episodes of The A-Team, Airwolf, T.J. Hooker, Falcon Crest, etc.

So it was the career of a genuine 1970s celebrity. He had a brief marriage to Candy Clark of AMERICAN GRAFFITI and MORE AMERICAN GRAFFITI fame, he was on Circus of the Stars a bunch, he produced celebrity golf tournaments for charity.

But it would all culminate in the year 1989, in his third to last movie, AMERICAN NINJA 3: BLOOD HUNT. 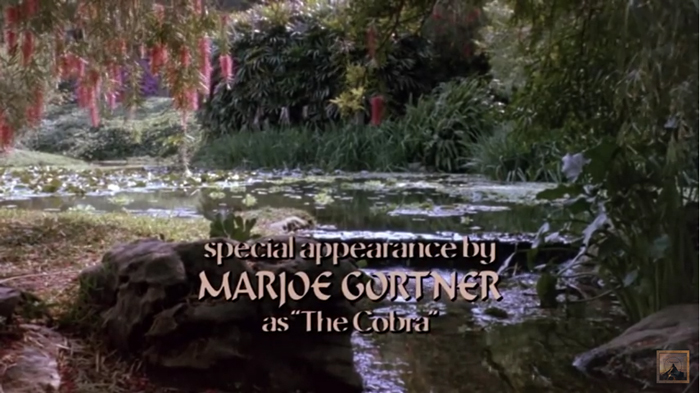 evangelism Marjoe Gortner
This entry was posted on Wednesday, May 25th, 2016 at 10:20 am and is filed under Documentary, Reviews. You can follow any responses to this entry through the RSS 2.0 feed. You can skip to the end and leave a response. Pinging is currently not allowed.