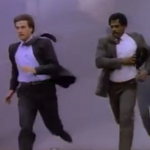 Then we switch to Doc going around recruiting each member of his group (always a favorite part of this type of story), following leads, doing surveillance, poring over the photos, comparing everything to what else they know. ZERO DARK THIRTY shit. Eventually they catch on that it’s this guy and they go look for him. They follow him on the street, he tries to lose them down alleys, goes through different apartments and out the back door, that kind of stuff. 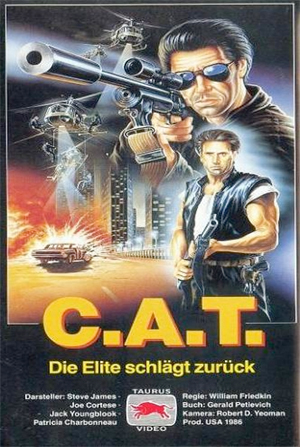 I should mention that “they” includes Steve James as Bud Raines. I always call James “America’s Sidekick” because of his roles in AMERICAN NINJA and AVENGING FORCE and stuff. But here Friedkin (who also used him in TO LIVE AND DIE IN L.A.) makes him an equal partner in all but seniority.

He has a great introduction where he seems to be a doctor checking out some prisoners in Mexico. But one of the prisoners is Doc (is it weird to be a patient nicknamed Doc?), who escapes with one of the others and hides him in the trunk of a car. When there’s a long line at customs and trunks are getting searched he gets nervous and recklessly drives over the border. Then Raines runs up and throws him the cuffs. Ha ha, sucker. Rendition. These guys know alot of tricks. And they’re gonna need them for this Carlos guy.

It’s funny, there’s a scene where Carlos discusses a job with an associate, and he reveals that he stopped believing in causes, he’ll do any job that pays. I think that was supposed to make him a scarier villain, that he was so evil he’d kill people just for the money, not for a crusade. But I think these days we tend to be more scared of true believers. How are we supposed to stop people who really think God wants them to blow up children or whatever? I guess things have really changed, but also haven’t changed at all. The C.A.T. Squad are a great team of professionals, but they didn’t stop the world from having to deal with more of these assholes.

This was Friedkin’s followup to TO LIVE AND DIE IN L.A., and it’s written by Gerald Petievich, the retired Secret Service agent who wrote both the screenplay and source novel for that one. Though obviously made for TV it has a similar “this must be kinda what it’s really like” feel. Tepper (an early role for Bradley Whitford from A PERFECT WORLD and ROBOCOP 3), the team member with the biggest character arc, is recruited out of the Service. We see him doing a training exercise with a staged assassination and trying to get away in a limo.

The team has an explosives expert, an analyst, stuff like that. I think they all have different specialties. From what I’ve read it seems like it’s a good way to do this type of work. Some people now lament that they’re trying to make people train in too many things to really become expert in any of them. It sounds like G.I. Joe and The A-Team really did have the right idea.

Or even if that’s bullshit it’s definitely a cooler approach for movies and TV. Makes for good teamwork. But you may be disappointed to learn that the C.A.T. Squad members do not have colorful themed nicknames like Claw Daddy, Tabby, Whiskers, Heathcliff and Top Cat. Nor do they have gadgets called The Flea Collar or a base called The Scratching Post. It’s just kind of a THE KILLER ELITE type covert action unit but they happen to be the Counter Assault Tactical Squad or something like that.

I’m assuming this was originally intended to be a TV show, and if so it might’ve been pretty good. Michael Mann was doing Crime Story and Miami Vice, so Friedkin might as well have had a badass procedural show too. We would’ve had more Steve James on film, for one thing. The ending of this one seems a little quick for a movie, but about right for an episode of a TV show. And it makes it feel more true to life in a way. I like it. The squad has to figure out who they’re looking for, find out where he is, corner him… but then once they do that everybody knows it’s pretty much gonna be over. There’s not a karate fight. He doesn’t get to make a speech or climb to the top of a tower or set off a death trap. He just has to decide whether he wants to give himself up or choose the other option. In other words he’s fucked. Tune in next week.

Bradley Whitford Eddie Velez Ennio Morricone Gerald Petievich Joe Cortese Steve James TV movies William Friedkin
This entry was posted on Thursday, April 23rd, 2015 at 7:14 am and is filed under Reviews, Thriller. You can follow any responses to this entry through the RSS 2.0 feed. You can skip to the end and leave a response. Pinging is currently not allowed.