BREAKDOWN is a highway suspense thriller starring Kurt Russell. He’s got his wife asleep in their fancy new truck, going on a trip, he takes his eyes off the road onto his coffee thermos for a second, almost nails some gentlemen of the rednecked community who back out into the road in front of him. When he stops at a gas station those guys show up and start puffing their chests out, commenting on his truck. So it’s got that class tension, that tourist guilt that I always dig in a horror or suspense type picture.

That’s good, but on the other hand I definitely prefer Russell as the sardonic working class type. I’m not so sure about him driving a fancy truck like in this one or wearing a tuxedo like in EXECUTIVE DECISION. I still like him on the right side of the tracks (he was still Elvis, after all), but not as much. 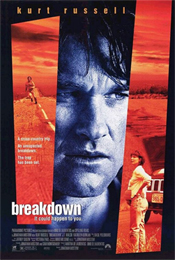 Speaking of EXECUTIVE DECISION, the gone-too-soon character actor J.T. Walsh plays a truck driver who stops to help when Kurt’s truck is broken down on the highway. He seems nice, but if you’re familiar with Walsh’s work you’ll have your suspicions. Long story short Kurt’s wife gets separated from him, he can’t find her, he thinks Walsh did something with her, nobody believes him. So it’s one of these paranoid ones – what happened? Who’s in on it? How will I prove it?

I don’t have a huge amount to say about this one, because I don’t have a huge amount to feel about it. Pretty good, pretty solid, pretty forgotten already. The director is Jonathan Mostow, who’s probly better doing mid-level movies like this. It’s not as underwhelming as SURROGATES, it’s just about the right amount of whelm. It’s not as exciting as T3, but also doesn’t have to suffer from being compared to T2. It only has to live up to, I don’t know, BLACK DOG or something. I forget what BLACK DOG was about exactly.

The part I thought was most interesting is a major spoiler, so here we go. I don’t have to write spoiler in all caps because I trust you guys. What I liked was how Walsh is this J.T. Walshian asshole, the ringleader of a group of bullies who fuck with tourists, extort money from them and murder them – but then he comes home to a wife and kid who have no idea what he does out there. They think he’s a regular guy. So when Kurt shows up to the house to try to rescue his wife it seems like he’s the maniac, the home invader threatening dad/husband. It’s easy to see how they see it. And the kid knows how to shoot. Then the wife has to deal with her husband’s secret underground chamber, which holds a TEXAS CHAIN SAW style freezer with Kurt’s wife in it. You gotta admit that looks bad. Honey, I can explain. It’s not what it looks like. She told me she needed a place to stay and that it had to be small, underground and refrigerated. I was just trying to help out.

I like those types of situations in movies. I was almost more outraged on behalf of this wife than on behalf of Kurt and his wife. At least they get away. This poor lady now has to raise her kid knowing that the father was murdering people for money. And what did he even do with the money? Was she living extravagantly? Doesn’t look like it. Plus if she keeps the property what’s she gonna do with that underground chamber? She could turn it into a video game lounge or something for the kid but it’s gonna have bad memories, you know.

So that’s why it’s called BREAKDOWN, because there’s this total breakdown in this relationship, a breakdown of communication, a breakdown of respect and trust. When two people are married there shouldn’t be this big of a secret between them, this big of a wall. And even between Kurt and his wife there is kind of this wall, and they gotta break down the wall. Because when they’re sitting there after their truck breaks down, they… oh wait, it’s called BREAKDOWN because their truck breaks down. I get it now. Sorry.

Anyway the lesson is: don’t ever leave your neighborhood. Strangers will get you. You don’t belong. On the other hand Walsh should’ve left his neighborhood. Doing business at home is what got him. So if you’re a good guy don’t leave home and if you’re a bad guy then do.

J.T. Walsh Jonathan Mostow Kurt Russell
This entry was posted on Friday, April 30th, 2010 at 12:25 pm and is filed under Action, Reviews, Thriller. You can follow any responses to this entry through the RSS 2.0 feed. You can leave a response, or trackback from your own site.