I didn’t realize this until recently, but the Pam Grier movie FRIDAY FOSTER came from a comic strip. It ran from 1970-1974 and was the first syndicated comic with an African-American woman in the lead. It was created by a journeyman writer named Jim Lawrence who also wrote for radio shows such as Green Hornet and comic strips based on James Bond and Dallas (!). The artist was a Spaniard named Jorge Longarón until the last year, when it was taken over by Gray Morrow, co-creator of MAN THING.

Grier plays Friday in the movie. She’s an assistant camera woman at a hip New York magazine. One New Year’s Eve her editor has a last minute assignment to photograph “the brother they call the black Howard Hughes” (Thalmus Rasulala, ABOVE THE LAW) on a surprise visit to town, and can’t get ahold of anybody but Friday, so she does the job. What nobody expects is that Carl Weathers and some other guys are trying to assassinate the rich guy. Friday gets some photos of the attempted shooting and winds up involved in a mystery.

This has many of the hallmarks of a great blaxploitation movie. It has a cast rivaling TRUCK TURNER‘s: Grier, Weathers, Eartha Kitt, Yaphet Kotto, Godfrey Cambridge, Julius Harris, Scatman Crothers. As a special bonus it has Jim Backus, the voice of Mr. Magoo. And Paul Benjamin – Coconut Sid from DO THE RIGHT THING.

Also it has a topnotch theme song and funky score by Luchi De Jesus (SLAUGHTER, BLACK BELT JONES). This score stands out because of its frequent use of the talkbox.

It has some chases, some shootouts, some jumping from rooftop to rooftop. At one point Friday steals a hearse to chase after Carl Weathers. Later she steals a diary truck. Some security guy she’s trying to get past says, “What are you doing here?”

“I’m delivering the milk!” she says, and breaks a milk bottle over his head.

Kotto, who is maybe the all time scariest blaxploitation villain in TRUCK TURNER, is a charismatic good guy in this one. As private investigator Colt Hawkins he faithfully aids Friday, does alot of the dirty work, even kills primary villain Carl Weathers on a rooftop while Friday’s downstairs somewhere.

And that’s the one problem with the movie, and the thing that must come from being based on a comic strip published in family newspapers. As plucky as Friday is, she seems like a pussy compared to Coffy, Foxy Brown, Jacks, Jackie Brown, etc. I like her choices in stolen vehicles, her initiative, her mystery-solving. But every time the guns come out she gets scared and hides behind something. After narrowly avoiding getting run over by a car she runs into Colt’s arms and cries about they were trying to kill her. When Carl Weathers invades her apartment she runs down the hall in a towel and hides behind a neighbor family. These are all reasonable reactions for a real person but disappointing ones coming from the genre’s premiere female badass. 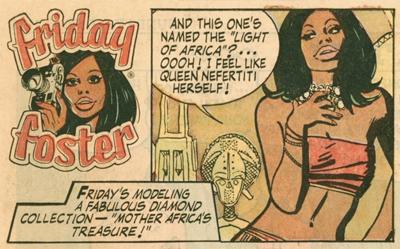 You know what it is, she’s more Brenda Starr than Coffy. Even has almost the same job. She would worry about her hair, she would not hide razor blades in it. She’s actually a former model, and some pimp is always trying to turn her into a ho, and she refuses. So that’s good. But you gotta wish she could use her fists sometimes along with her sexuality. A neighbor lady suggests that she’s a ho, and she doesn’t seem surprised. It’s implied she sleeps with a senator she’s trying to get information from, and she definitely sleeps with the black Howard Hughes. At the end she stands arm-in-arm with both of them and makes kissy faces at Colt. I wish I could read this as her being the female Shaft, but it seems more naive, like Barbarella at best. In one scene it cuts to her getting ready for a shower, smiling like a Barbie doll. It’s funny and cute but a little below Pam, in my opinion.

Otherwise though this doesn’t have the feel of a based-on-a-comic-strip movie like BRENDA STARR or POPEYE, and it’s definitely not for little kids. Popeye got away with saying “shit” once in the movie, that was kind of a joke I think. This one has murders and all kinds of language, including the n-word, and a couple different peeks at Pam’s, you know, hills. Pam looks great in this movie and I think we’re all happy that these images have been preserved for future generations, so hopefully comic strip purists will forgive the liberties.

Director Arthur Marks also did DETROIT 9000, BUCKTOWN, J.D.’S REVENGE and MONKEY HUSTLE. Plus LINDA LOVELACE FOR PRESIDENT. He wrote the screenplay with DETROIT 9000’s Orville H. Hampton, a veteran writer of film and television who later wrote mostly for cartoons like The All New Super Friends Hour, Scooby’s Laff-a-lympics, and the cartoon version of Dukes of Hazzard.

I mean, this is a pretty good movie, I just don’t like how in this one and BUCKTOWN all the sudden Pam Grier is a sissy, even though they both were made after COFFY. If you can get past that check it out.

Arthur Marks blaxploitation Carl Weathers Eartha Kitt Godfrey Cambridge Jim Backus Julius Harris Pam Grier Paul Benjamin Scatman Crothers Yaphet Kotto
This entry was posted on Monday, July 16th, 2012 at 12:09 am and is filed under Comic strips/Super heroes. You can follow any responses to this entry through the RSS 2.0 feed. You can skip to the end and leave a response. Pinging is currently not allowed.