Don’t worry, no Batman spoilers here. In today’s episode of VERN PREDICTS I will brag about the time I sort of foresaw a stupid little thing that happened. Also let’s lay down a few rules about discussion in case a new Batman movie comes out this week.

Two months ago on the “twitter” microweblogging service I prophesied a confusion that could happen between a character in a highly anticipated summer movie and a controversy in the 2012 U.S. presidential election: 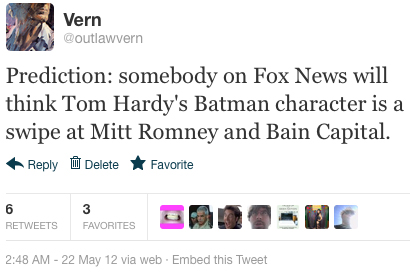 “Bane” is of course the Batman villain so dear to Americans’ hearts because of his portrayal by the late bodybuilder Jeep Swenson in a previous Batman picture, now played by Tom Hardy in THE DARK KNIGHT RISES. “Bain Capital” is the alternative asset management and financial services company co-founded in 1984 by Republican presidential candidate Mitt Romney. He headed it until 2002, finally retiring 3 years earlier in 1999 (long story). During his reign they acquired Artisan Entertainment, but he personally opted out of the deal so as not to profit from R-rated movies. And the sonofabitch would’ve had my vote, too, ’cause he would’ve been responsible for GHOST DOG.

Not bad, right? In the interest of accuracy I gotta admit that in the quotes used in the article Limbaugh waffles back and forth, obviously realizing how ignorant it would be to claim the long-in-the-works (not to mentioned based-on-previously-existing-character) movie had anything to do with this issue. But then he claims that “there’s now a discussion out there as to whether or not this is purposeful and whether or not it will influence voters.”

In my opinion that alleged “discussion out there” was for sure happening on Fox News, that’s how he knew about it, and that’s why my twittering was 110% accurate as a motherfucker. ‘Cause VERN PREDICTS. That’s just what I do, you know?

As for the movie, I know you guys are gonna be commenting on it before I get my review up, so you can go ahead and do that on this post or the forum. But out of respect for me:

1. PLEASE avoid all spoilers (even possible spoilers you heard about) in the comments until the review is posted

2. Don’t start a Batman discussion on some unrelated review just ’cause it’s at the top. If you do this I hope Bane breaks into your house and punches all your comic book collections

3. Even when the review is up don’t type spoilerish shit at the beginning of a comment and ruin things for some poor sonofabitch that’s gonna see it in the recent comments sidebar

Okay, be safe and have fun everybody! What do you all think? Just my 2 cents. PEACE

Vern Predicts
This entry was posted on Wednesday, July 18th, 2012 at 1:36 am and is filed under Blog Post (short for weblog). You can follow any responses to this entry through the RSS 2.0 feed. You can skip to the end and leave a response. Pinging is currently not allowed.