Albert Johnson (Charles Motherfuckin Bronson) is a trapper drifting through snowy 1931 Canada when he happens to come across some assholes betting on dog fights. One of the dogs is injured and apparently Albert loves animals (when he’s not trapping them) so he takes the dog at gunpoint. In order to smooth things over he gives the owner $200, but just to be clear he’s not negotiating. He’s taking the dog. It’s just like a convenience charge or a dogfight interruption processing fee or something like that. The owner of the dog is Ed Lauter, so this whole incident must be why they don’t seem to like each other in DEATH WISH 3. 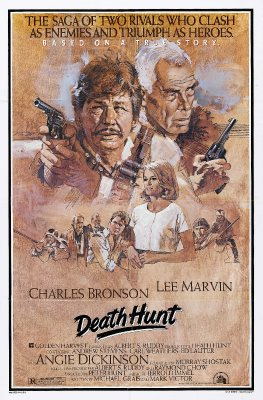 Well, Ed Lauter goes crying like a baby to Sergeant Edgar Millen (Lee Marvin), a mountie who doesn’t give a shit about somebody stealing his stupid dog. So Ed does the opposite of what Doug Llewelyn used to say on The People’s Court, he does take the law into his own hands. He gathers up some of his yahoo friends, they track Albert to his cabin and shoot the dog, at which point he shoots one of them. Equal trade.

That gives the yahoos all the excuse they need to get Sgt. Millen after Albert. So a “death hunt” it turns out is the same as a manhunt but where the head of the hunt feels a bit reluctant because the guy he’s hunting is obviously much more respect-worthy than the shitbirds on his own team. He does have Sundog Brown on his team though, and you know he’s cool because he’s Carl Weathers. They also have this babyfaced rookie named Alvin Adams (Andrew Stevens). But the rest of the posse are not exactly the guys you want to be seen hanging out with.

Part of the entertainment value comes from these motherfuckers not knowing who they’re dealing with. Some of them get a little nervous when they find out from the guy at the trading post that Albert came in and bought 700 rounds. I mean maybe there was a big sale and he was stocking up, but it seems more likely that he’s planning to, like, shoot at people. They start getting it in their heads that he’s “The Mad Trapper,” a feared serial killer trapper who offs other trappers and steals their gold teeth. (Although that might’ve just been a story made up to scare trappers into keeping their disgusting mouths closed.)

Albert is pretty much your prototypical loner survivalist dude, a good role for Bronson to make likable. He doesn’t speak much in the movie and he doesn’t need to. We like him because of his Seagalian dog rescue, his John Rambo stubbornness and his masterful handling of the situation. He knows what he’s doing so he prepares his cabin for a siege. When the posse shows up Millen comes to the door unarmed and talks to Albert respectfully. He seems to honestly want to clear up what happened, and almost talks him out. But of course some dipshit on the team starts firing for no reason and turns it into a bloodbath.

In one of the most badass moves in the movie, Sundog throws a bunch of dynamite into the cabin and blows it up, but when they go to investigate it turns out Albert hid in a hole he dug into the ground so he jumps up and shoots at them. This movie is actually inspired by a real manhunt, and I was impressed to find out that this was one of the parts that was actually real.

In real life they don’t actually know who Albert was, but he probly was the mad trapper, and he killed the Lee Marvin guy, and nobody shot down the plane.

Of course Bronson and Marvin had done a movie together before, they were both part of the ensembe in THE DIRTY DOZEN. Weirdly my computer tells me they also both had uncredited bit parts in the ’52 Henry Hathaway movie DIPLOMATIC COURIER starring Tyrone Power and Patricia Neal. But this is the only one where they’re the two leads, bouncing off of each other, and that’s a hella of badass icon wallop. Both of these guys are obviously in the pantheon of all time badass greats, but I gotta give special credit to Marvin for being the one who worked with all the other ones. He co-starred with Bronson and Weathers here, with John Wayne, Clint Eastwood, Jim Brown, Burt Lancaster, Robert Ryan, Jack Palance, Toshiro Mifune, Paul Newman, Gene Hackman, Ernest Borgnine, Robert Shaw, even, you know, Chuck Norris… he was all over the place.

Angie Dickinson is in this one too, it’s the end of her Lee Marvin trilogy that started with THE KILLERS in ’64 and POINT BLANK in ’67. But she doesn’t get much to do.

Director Peter “Death” Hunt also did ON HER MAJESTY’S SECRET SERVICE, which in my humble opinion is one of the James Bond movies. Your mileage may vary. He actually was editor for DR. NO, FROM RUSSIA WITH LOVE and GOLDFINGER, second unit director for THUNDERBALL and YOU ONLY LIVE TWICE and even did something for the title sequence of CHITTY CHITTY BANG BANG. So I guess that’s how he got into that whole racket. This movie’s pretty opposite of that though, it’s not exactly glitz and glamour. Mostly dudes in fur trying to stay warm. The writers, Michael Grais and Mark Victor, also did MARKED FOR DEATH, POLTERGEIST, and, um, COOL WORLD.

Andrew Stevens went on to produce many important films in our lives including BATTLEFIELD EARTH, BALLISTIC: ECKS VS. SEVER, HALF PAST DEAD, THE FOREIGNER, OUT OF REACH, BLACK DAWN, SHADOW MAN, MISSIONARY MAN, and some of the DTV Wesley Snipes pictures.

DEATH HUNT is nothing fancy, but it’s a solid little movie. It’s mostly powered by that fuel of many a great badass film, the Mutual Respect Between Foes. Millen’s a smart and honorable guy, he immediately senses that Albert is getting railroaded and tries to give him every chance to clear it up. He’s ready to kill him if he has to but would rather not have to. Albert has no problem shooting up Ed Lauter’s buddies, but doesn’t take cheap shots at Millen and does try to take his offers. What makes it really enjoyable is that it’s two great characters in a battle of wits and survival skills, and neither one is really the bad guy. You root for both of them. I mean, how are you supposed to choose between Charles Bronson and Lee Marvin?

Angie Dickinson Charles Bronson Ed Lauter Lee Marvin
This entry was posted on Sunday, September 12th, 2010 at 10:26 pm and is filed under Action, Reviews, Western. You can follow any responses to this entry through the RSS 2.0 feed. You can skip to the end and leave a response. Pinging is currently not allowed.