Back when I was doing the Spielberg marathon somebody suggested I should review POLTERGEIST, and I thought it was a good idea. Oh shit, today is the 30th anniversary of the movie’s release! I guess we’ll do it today.

It definitely fits in with the Spielberg marathon. Tobe Hooper is the credited director, but Spielberg was a very hands-on producer and writer, and it seems way more like his directorial works than his other productions do. It has good, natural performances by kids and adults, smoothly choreographed camera moves, a suburban mid-west setting, state-of-the-art-at-the-time visual effects, people looking in awe at glowing light. Like E.T. (which came out one week later) it has a little boy with a room full of STAR WARS toys. The score is by Jerry Goldsmith, but is used similar to how Spielberg uses John Williams. There’s a group of scientists in a specialized field (like JAWS, CLOSE ENCOUNTERS, even JURASSIC PARK). There’s not as much that reminds me of Hooper – just TEXAS CHAINSAW MASSACRE 2’s Lou Perryman in a bit part as a guy working on the house, and a pit of rotting corpses at the end. That part seemed like something he’d be into.

I really like the structure of the story. It sets up the family and signs of something spooky going on in the house before they even have an encounter. The dad, played by Craig T. Nelson, literally goes to the other side, but it’s his daughter Carol Anne (Heather O’Rourke) that gets stuck over there. They can still hear her voice on their TV – a supernatural baby monitor.

So it’s the first act and nobody in the family has to be convinced, they’ve all experienced this haunting. Now, the obvious next horror movie step is they try to get help but nobody believes them, thinks they’re crazy, etc., they have to search to find the right help. POLTERGEIST skips all that shit – it even skips the next morning “What are we gonna do?” conversation – and cuts straight to dad meeting with parapsychologists. Does he have to jump through a bunch of hoops to prove to them the case is legit? No, he just has to open the door and show them the furniture and objects floating around like they’re in a whirlwind. It’s kind of like that great gag in PHANTASM where you think the older brother won’t believe him but he just shows him a little box with a living, chopped off finger in it, and immediately everybody’s on the same page. 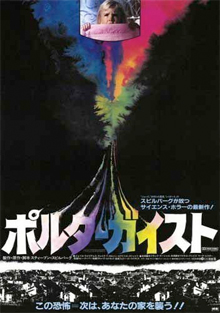 There’s also not any time wasted with untrustworthy or not-good-enough ghost experts. This team has never seen anything like this, they seem out of their league, but they rise to the occasion. I remembered weird little Zelda Rubinstein as the psychic who takes charge of the rescue mission into the other side, but  I forgot all about Beatrice Straight as the leader of this team. She’s not just a ghost expert, she turns into a supportive friend. They even hug!

JoBeth Williams is really good as the mother. Shee has just the right balance of fear and crazed humor when she starts discovering weird things in the house. Maybe my favorite scene is when she figures out the spot in the kitchen where you can leave a chair and it’ll slide across the room, so she turns it into a fun game. Her whole reality has changed, better to laugh than panic. It makes sense.

It’s funny, this movie takes the very routine image of a snowy television set and tries to make it scary, like JAWS did to beaches. But modern technology has probly erased familiarity with snow. Cable prevents you from having to “tune in” to a channel, and TVs are designed to turn the sound off and fill the screen with blue when the channel goes out. So I wonder if young people understand what’s going on when a little girl touches her hands to the fuzzy TV? I wonder, how many souls have we lost to the other side while we’re using Hulu?

POLTERGEIST’s weakness as a horror movie in my opinion is that it’s a little too reliant on special effects shots for what should be the big scares. It’s the same thing as CGI now – it’s done really well, it looks cool, but it kind of takes me out of the established reality because it’s obviously animated and composited, it looks separate. There are a couple of ghost/monster apparitions that are really cool, but not scary. They would work in GHOSTBUSTERS.

I never really thought about this before, but this time I noticed it’s kind of a similar movie to THE EVIL DEAD. There is some set up, but then these ghosts get unleashed and it’s just a rollercoaster ride of crazy shit and some cool effects gags jumping out every once in a while. They even both have a character get a grey streak in their hair from facing the ghosts. But despite its way lower budget and inexperienced filmatists THE EVIL DEAD is a way more intense version, more packed with thrills and makes you feel more like it means it. Because it does.

I guess ghosts are tricky for me. I don’t believe in them, so I like when a movie puts me in a vulnerable state where I’m open to the possibility. Thinking about mortality and souls and sounds in the night in a big house. POLTERGEIST doesn’t do that for me, but it is fun to watch. And it does have the perfect ending: a long tracking shot of the family – their house having supernaturally imploded – loading into a hotel room, then pushing the TV outside.

“I don’t understand why any of these questions have to be raised. I always saw this film as a collaborative situation between my producer, my writer, and myself. Two of those people were Steven Spielberg, but I directed the film and I did fully half of the story boards. I’m quite proud of what I did…I can’t understand why I’m being slighted. I love the changes that were made from my cut. I worked for a very good producer who is also a great showman. I felt that was a plus, because Steven and I think in terms of the same visual style.” –Tobe Hooper in a May 24, 1982 L.A. Times article.

“My enthusiasm for wanting to make ‘Poltergeist’ would have been difficult for any director I would have hired. It derived from my imagination and my experiences, and it came out of my typewriter [after re-writing the Grais/Victor draft]. I felt a proprietary interest in this project that was stronger than if I was just an executive producer. I thought I’d be able to turn ‘Poltergeist’ over to a director and walk away. I was wrong. [On future films] If I write it myself, I’ll direct it myself. I won’t put someone else through what I put Tobe through, and I’ll be more honest in my contributions to a film.” –Steven Spielberg, same article

It used to bother me that people said Tobe Hooper didn’t direct POLTERGEIST. Like they figured even though he directed one of the greatest horror movies of all time he wasn’t good enough to direct a slick Hollywood family version of a horror movie. But watching it again I get it, it’s undeniably Spielbergian. I know that Spielberg and Hooper have both denied the rumors, and Spielberg even took out a full page ad in Variety apologizing to Hooper for implying it. But I wanted to read more about it to find out why people always say this.

The best resource I found is this exhaustive collection of quotes on the matter. They range from 1982 magazine and newspaper articles to random dudes posting rumors on the IMDb bulletin boards. Alot of it comes from a pretty obnoxious anonymous crew member calling himself “Ben There” who lords over everybody because of his alleged insider knowledge and dramatically drops hints like he’s the fuckin Riddler or something. Although he at times sounds like a conspiracy nut I think his version of the events seems pretty believable: Hooper did the pre-production, but on set was indecisive, Spielberg (as producer and writer) butted in and from there became de-facto boss, even though Hooper was the guy saying “action.”

Other statements from non-anonymous people seem to fit with that story, saying that cast and crew were confused by conflicting directions from the two. Everybody also seems to agree that Spielberg did all the post-production. Jerry Goldsmith says he didn’t even meet Hooper.

There are other stories on there claiming Hooper was fucking up because he had a coke problem, even that he was in rehab during post-production, but Ben There doesn’t agree with those claims. One of the drug accusations comes from a dude who says that POLTERGEIST and SALEM’S LOT are Hooper’s only good movies. So if he was claiming Hooper was on crack I would believe it because he’s obviously an expert on that topic.

Actually, if Hooper had a big drug problem maybe it would explain what happened to him. Kind of a Sly Stone situation. Maybe he’ll come back all the sudden on the Grammys with a huge mohawk. But I doubt it. I don’t buy it.

So after taking a look at the available facts my stance on The Great Poltergeist Directorial Mystery has changed. I used to think it was just a dumb rumor caused by people not knowing how good of a director Tobe Hooper was back then. Now I believe that Hooper was basically a director-for-hire, tasked with following Spielberg’s vision, maybe putting his own spin on it, but he didn’t get to do as much of the second one because a big Hollywood production on a soundstage trying to do what the producer wants is alot different from independent filmmaking in Austin, so he was kind of in over his head and couldn’t take full control (and may not have wanted to). He had only done CHAIN SAW, EATEN ALIVE and THE FUNHOUSE. Those were the kind of movies he was comfortable with, and the kind that his talents were meant for.

Whatever happened though, it turned out pretty good I think. Not a bad picture.

Craig T. Nelson ghosts Jobeth Williams Steven Spielberg Summer of '82 Tobe Hooper Zelda Rubinstein
This entry was posted on Monday, June 4th, 2012 at 12:43 pm and is filed under Horror, Reviews. You can follow any responses to this entry through the RSS 2.0 feed. You can skip to the end and leave a response. Pinging is currently not allowed.