The real trouble starts when Tucker and Dale are fishing and accidentally startle Allison (Katrina Bowden) mid-skinnydip. She falls in the water and hits her head. Dale jumps in and saves her life, but her friends see her being flopped into the canoe, take it the wrong way and run away screaming. I guess they interpreted “We got your friend!” different from how it was intended.

So poor Tucker and Dale are stuck with this unconscious girl, so they take her to their new “vacation home,” which to everybody else looks like a spooky rundown shack complete with creepy newspaper clippings about local deaths (courtesy of the previous owner). Actually from the outside it reminds me of the EVIL DEAD cabin, but on the inside it’s alot trashier. But way less evil. 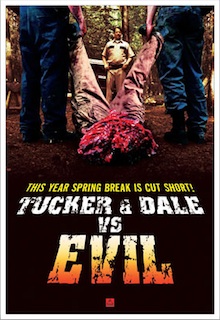 Allison’s friends are morons, but I’ll give them this: after their initial screaming and running they regroup, man up and come try to “rescue” her. But they continue to misunderstand things. And they have terrible luck so they slip up and keep accidentally impaling themselves and shit like that. Basically, graphic slasher movie death, but all self-applied.

It’s a ridiculous concept, but it continues to be funny the further they take it. In the end they sort of have to switch things up and have an actual bad guy (the ‘Evil’ of the title, I guess), and that’s not quite as interesting in my opinion, but I don’t really know a better way to do it. They still do a surprisingly good job keeping the momentum going. I love that the more things happen the more absurd it gets for them to explain what happened. We know they’re telling the truth but of course nobody should believe them.

These filmatists (writer/director Eli Craig [an actor who was in THE RAGE: CARRIE 2 and played the young version of Tommy Lee Jones in SPACE COWBOYS] and co-writer Morgan Jurgenson [who probly saw the movie SPACE COWBOYS {uncredited}]), seem pretty perceptive about horror movies, I believe that these filmatists know the genre a little better than some of the other people making these postmodern horror comedies. I’d still rather watch the real thing, but if you like this subgenre you should definitely check this one out.

It also has a very light coating of class issue satire because of the assumptions these nitwits (always addressed as “college kids” by Tucker and Dale) make about “hillbillies.” These guys couldn’t be friendlier but they scare the shit out of the college kids. And they’re intimidated themselves because they think they’ll be judged for their lack of education (which should be the least of their concerns, it turns out).

Tudyk has a lifetime nerd following ’cause he was in the show Firefly, and he’s always pretty good. But the secret to the movie’s success is Labine as Dale. Physically he’s sort of Jack Black-ish, a big guy with a big beard, a vacant look in his eyes, but a total sweetheart when he starts talking. And he has a weirdly good chemistry with Bowden as Allison. She’s one of those cartoonishly good looking girls they got in Hollywood, blond and sculpted by the Lord into an almost off-puttingly ideal depiction of American beauty standards. You expect her to play dumb, like her character on 30 Rock. Instead she’s the only one that listens and understands what’s going on. And it’s hilarious to see her trying to sit down both parties and create a dialogue between them. It should be easy to explain that they saved her from drowning and did not try to kill her, but unfortunately one of the college kids has heard about Stockholm Syndrome. In this situation a very small amount of education makes them overeducated.

Allison turns out to be so likable that I almost believed the far-fetched romance between these two opposites. It’s surprisingly sweet for a movie where the gory deaths of a bunch of kids are played for laughs.

I wonder which other horror situations were just misunderstandings? Probly not CHILD’S PLAY.

currently playing in some theaters, on video November 29th

Alan Tudyk horror comedies Katrina Bowden meta-slashers rednecks Tyler Labine
This entry was posted on Monday, October 31st, 2011 at 12:41 am and is filed under Comedy/Laffs, Horror, Reviews. You can follow any responses to this entry through the RSS 2.0 feed. You can skip to the end and leave a response. Pinging is currently not allowed.

15 Responses to “Tucker and Dale vs. Evil”