I didn’t have time to do a countdown for MACHETE like I did THE EXPENDABLES, but it is almost like a holiday today so I figure it deserves some kind of commemoration. Obviously Seagal is the supporting player I’m most excited to see on the big screen again, but in second place I think would have to be Don Johnson. So I marked the occasion by checking out a Don Johnson movie I always meant to see, John Frankenheimer’s DEAD BANG from 1989.

Some people seem to think you put somebody like Don Johnson in a movie like MACHETE as a wacky pop culture joke, but I think Rodriguez follows the Tarantino philosophy of casting. I think he casts guys like Johnson, Seagal and Jeff Fahey because he genuinely likes them as actors and thinks they’re underappreciated or underutilized. Rodriguez doesn’t get alot of credit for career resurrecting or igniting like Tarantino did for John Travolta and Christophe Waltz, but he probly should. He gave Salma Hayek her first starring roles, pretty much made Danny Trejo into an icon, gave George Clooney his first real movie star role. More recently he gave Mickey Rourke two really good roles in ONCE UPON A TIME IN MEXICO and SIN CITY shortly before he blew up again with THE WRESTLER. That wasn’t supposed to be funny, that was because he recognized Rourke’s continued excellence before alot of other people did. I doubt Johnson’s got a WRESTLER in him, but he does deserve another shot. 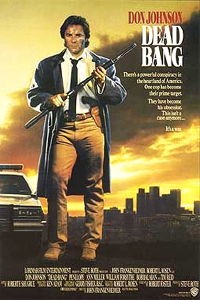 DEAD BANG is a good, not great Frankenheimer cop movie. Johnson, fresh off playing Sonny Crockett, puts on some socks and goes straight into his big screen washed up cop role. He plays homicide detective Jerry Beck, and this guy is in bad shape. He’s completely broke from legal fees for his divorce. His wife got a restraining order so he has to sneak by the school during recess just to see his kids for a second. When he tries to call them on Christmas she claims they’re in bed even though he can hear them in the background. And he doesn’t put up with it passively. When he gets mad you can see why the ex-wife is scared of him.

You might think setting it on Christmas is an attempt at getting a piece of that LETHAL WEAPON and DIE HARD magic from the couple years before. But this doesn’t feel like that kind of a big crazy action movie. It reminds me a little bit of TO LIVE AND DIE IN L.A., the heavily police-consulted type of more realistic procedural, but combined with the DIRTY HARRY type cop movie. And also it’s one of those loner cop movies where he’s on his own, not getting much backing from his department and interference from the FBI, but tirelessly throwing himself into the case anyway.

The case is a murder, of course. Some nut shoots a black convenience store clerk, then a white cop who runs into him on the street. Beck figures out a suspect quickly and tries to track him down. The guy turns out to be a white supremacist and just by dumb luck Beck finds himself on the trail of a group traveling across the country to various Aryan Nation type churches and militias, committing crimes and uniting bigots. I’m not sure why it’s called DEAD BANG. I think WHITE SUPREMACIST ROAD TRIP would make more sense.

The movie surrounds Beck with assholes and dipshits so you can enjoy him being a dick to them. If everybody else was nicer than they are he would just seem like a huge jerk and it would be uncomfortable to watch. But as it is he’s semi-sympathetic. When the suspect’s parole officer (Bob Balaban) refuses to meet with him on Christmas Eve he makes him meet him on Christmas Day, then tricks him into coming along to raid a biker house. There’s a foot chase that gets goofy because when he catches the guy he’s so hung over that he pukes on him. Then he gets him to talk by threatening to puke on him some more.

Beck probly could’ve placed respectably in any washed up cop competitions of the time, but the two BAD LIEUTENANTs tip the scales so hard that it almost seems cute now by comparison. But the point is different. It’s not about how slimy cops can get, it’s about how this one cop has blown his life so bad he has nothing left but to pour himself into this case. So he finds himself sitting at a desk looking through files on Christmas.

William Forsythe is excellent in a role opposite of the type he plays so well in OUT FOR JUSTICE, STONE COLD and DEVIL’S REJECTS. Instead of an out of control maniac he’s got a stick up his ass. He never works up much outrage at the bigots they’re dealing with, but files a complaint against Beck for cursing (because he’s a Christian, he explains). Beck learns to work with this asshole and (SPOILER) normally they’d either gain respect for each other at the end, or the guy would turn out to be a traitor. I like that neither one happens.

It never occurred to me before, but Don Johnson has a little bit of Clint Eastwood in him. I mean, just a little bit. He’s probly more of a pretty boy, but he’s got similar squinty eyes and cynical, fed-up-with-this-bullshit persona. And this script could’ve worked for an Eastwood movie. But I think with Clint you’d be a little more seduced by the character’s charisma, a little more forgiving of him being such an asshole. With Johnson it’s funny how much most of his co-workers hate him, but not as funny.

He gets some good ones though. His best sarcasm is when he goes to the sheriff of a small town and finds out the racism is so out in the open here that in his office the sheriff has a big wooden sign with the n-word on it, and he complains that he’d still have it on the outside if it wasn’t for “those ACLU f-ggots.” After some comments about California cops sitting on the beach Beck decides to play along and makes up an elaborate story about how he didn’t want to investigate the murder of a fellow officer but he had to because he drew the shortest straw from a banana daiquiri.

His luck turns around in one of the other towns where the sheriff turns out to be black. That’s a huge relief for Beck, not because he reminds him of Tubbs, but because he keeps working with these crackers and any one of them might tip off the racists. So he’s delighted to join an otherwise all back team to raid a militia compound. And there seems to be more mutual respect going between Beck and these guys. He would never treat them like he treats Bob Balaban or his psychiatrist who makes him laugh because he looks like Woody Allen.

There’s a little irony to the racial themes in the story. White supremacists always make good easy-to-hate bad guys, and they do a good job here of making them scarily smart despite their racist idiocy. But let’s be honest – Beck isn’t doing this because he wants to crush the white power movement, or to stop this string of hate crimes. He’s doing it because of the white cop that was killed as an accidental side effect of the hate crime spree. That’s his case, that’s his obsession, that’s what got him laid by Penelope Ann Miller (long story). Of course he wants to bring down all these assholes while he’s at it, but you can’t help but think that if things had been a little different and only the black cashier had been killed then nobody would’ve followed this thing through, the FBI would still claim white supremacists don’t work together and nothing would’ve stopped these particular pricks.

ENDING SPOILERS: The movie comes close to a brilliantly unexpected ending. Of course he gets his guy, but when Beck starts confronting him about the death of the cop the suspect swears he doesn’t know what he’s talking about, and it becomes clear that they’ve chased the wrong guy 1500 miles across the country and under the ground. Of course the real killer turns out to be there anyway and the case is solved, but wouldn’t it be cool to end a movie on “well, the guy we’re looking for must’ve got away, but at least we stopped something bigger by chasing after this one”?

I think DEAD BANG is mainly remembered as another one of these failed attempts to turn a huge TV star into a movie star, because the movie wasn’t that great and didn’t really take off. Since he’s fine but doesn’t really stand out as being spectacular in it people decided he couldn’t carry a movie and blamed him. That’s less of an injustice than it was with David Caruso in the criminally misunderstood KISS OF DEATH, but it’s not really deserved. Give him the right role I think he could be good. People might stop wearing socks again in his honor.

Bob Balaban Christmas Christmas crime Don Johnson John Frankenheimer white supremacists William Forsythe
This entry was posted on Friday, September 3rd, 2010 at 1:57 pm and is filed under Action, Reviews, Thriller. You can follow any responses to this entry through the RSS 2.0 feed. You can skip to the end and leave a response. Pinging is currently not allowed.