REINDEER GAMES is not a Christmas movie in the sense that it’s about Christmas, or about somebody coming to a realization about the meaning of Christmas, at least not a very convincing one. But I can guarantee you this much: it takes place in December, with a heist planned for Christmas Eve, and with the participators all dressed as Santa Claus. So there are some discussions of cranberries and what not. Maybe a mention of sugar plums, I can’t remember for sure. (Have you ever had sugar plums? They’re actually really fuckin good. I wish I knew a place that sold them. I might have visions of them dancing in my head now that I remembered them.) 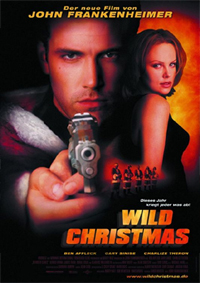 Ben Affleck, in an early draft of his grimacing tough guy character from THE TOWN, plays Rudy, convicted car thief, about to get paroled, same with his cellmate and best friend Nick (James Frain), who’s extra excited about it because he’s gonna hook up with his penpal girlfriend Ashley, who he knows from many photos and love letters is Charlize Theron. Unfortunately Nick gets shivved protecting Rudy, so when Rudy sees poor Ashley waiting outside the prison he gives in to the little devil on his shoulder and introduces himself as Nick. Pretending to be Nick does achieve the important goal of access to Charlize Theron’s classified zones, but also gets him mixed up in a plot where some dangerous dipshits are gonna force him to help rob an Indian casino they mistakenly think he used to work at.

Sinise’s Monster is the leader of the villains, with an all star cast of henchmen: Donal Logue (BLADE) as Pug, Danny Trejo (everything) as Jumpy, and Clarence Williams III (everything else) as Merlin. The first two don’t get much to do, except Trejo has one funny part where he suggests that because of Christmas’s importance to the economy “an intelligent country would legislate a second such gift giving holiday. Create, say, a Christmas 2, late May, early June, to further stimulate growth.” CHRISTMAS 2 would actually be kind of a good title for this movie.

Williams gets a few more good lines, like after they ambush and brutally assault Rudy in his hotel room Merlin isn’t really paying attention to all that and observes, “They got a shitload of cookies in here.”

I always avoided this because it had a bad reputation, and I wasn’t sold on Affleck, and etc. But I knew it was John Frankenheimer, and they eventually come out with his director’s cut (he’d been pressured to shorten it, even the sex scene with Charlize! What the fuck!?) Actually I think this is a pretty good movie, not too much in the “trying to be Tarantino” feel, more of a neo-noir, what with this whole mistaken identity plot. And there’s some Elmore Leonard in there, I think. The bad guys are dumb but scary, the hero is not exactly a mastermind either, he’s just smart enough to catch that these guys don’t know what they’re doing, and to try to bullshit them when he realizes they’ll kill him if they understand that he’s the wrong guy.

And I like that the crime is small time – a failing Indian casino, almost empty because it’s almost Christmas. He says there’s $5 million in the safe, but he has no idea, he’s just making shit up. He’s a good noir protagonist – self aware enough that you like him, unlucky enough that he’s always digging the hole deeper and getting the shit beat out of him. Theron is good too, way too naive, way too in love with this guy, you kind of feel sorry for her, if you trust her.

It’s a good tone. Not too jokey really, but funny sometimes. Dennis Farina has a small part as manager of the casino. In a meeting with tribal leaders, defending the quality of the club, you might be thinking he’s some kind of hot shit mafia type or something. But you start to have suspicions when he arrogantly says, “By the way, you show me another buffet that offers both Coke and Pepsi. Don’t even bother looking because it doesn’t exist, okay? So now what else do you people want me to do?”

This was Frankenheimer’s last theatrical release, and that’s nothing to be ashamed of. It’s solid old school filmatism that passes for a 2000s movie. Not losing his magic, not bending over backwards to appeal to stupider generations, just finding a good balance. The script is by Ehren Kruger, who wrote a couple pretty good things (this, the American THE RING) and some really bad ones (TRANSFORMERS 2, SCREAM 3, also he’s threatening to remake VIDEODROME).

There are some stories about this movie because Vin Diesel originally was cast in it, but is not in the movie. There’s a famous story that supposedly Frankenheimer wanted him to wear a muscle shirt but he said “I only show my guns in a Vin Diesel film” and got fired for this defiance. When I finally saw the movie I couldn’t help but notice that Gary Sinise is wearing a muscle shirt through alot of the movie. I thought holy shit, did a then-unknown Vin Diesel really get replaced by Academy Award winner Gary Sinise? But researching this theory I came across an interview with Danny Trejo where he says Diesel was just playing Pug, a flunky to the Sinise character who ended up being played by Donal Logue. According to Trejo’s version of events Diesel left the movie of his own accord to star in THE FAST AND THE FURIOUS, but was very loyal and had a hard time making that decision. It’s interesting because here they are about to release a fifth FAST AND FURIOUS movie, and I honestly don’t think that first one would be popular enough for a sequel without the raw power of Diesel’s charisma. Although maybe if things had been different he would’ve turned REINDEER GAMES into a monster hit and THE FAST AND THE FURIOUS would be an underrecognized oddity starring Donal Logue as a macho street racer.

But back to REINDEER GAMES. Unfortunately I gotta tell you I hate (SPOILER) the twist at the end. It didn’t make me retro-actively hate the entire movie like the twist in (SPOILER) HIGH TENSION, but it’s pretty ridiculous. It’s that same blues theory, you just gotta play the song well, you don’t gotta put on the Peter Pan wires and fly over the audience doing an Eddie Van Halen solo at the end. This is a perfectly enjoyable crime story when taken at face value, it doesn’t need to have something secretly going on, in fact that showoffy bullshit takes away the small-time down-to-earthness that made the story appealing in the first place.

(BIGGER SPOILER) It doesn’t need a secret mastermind, a surprise betrayal, a faked death. When you find out what supposedly really happened it really doesn’t make any sense. He put on an act for six months in prison, faked his death, knew this would trick his cellmate into pretending to be him so he could trick some other guys into forcing this guy to rob a casino. It’s just not a good plan, it’s a miracle it even came anywhere close to working, and it would’ve been way easier just to rob the damn place himself.

And plus, the whistling! I despise that shit. In the opening the character in question is whistling “Let It Snow,” so when he shows up alive again at the end he’s whistling it again in what’s supposed to be a menacing context. One of those whistling bullies we’re all terrified by, I guess. I understand why he’s whistling it for us – to tell us “remember, this is the guy from the beginning.” But in his mind, within the world of the movie what is he thinking? Hey, he’ll remember that I was whistling this that one time when we were in the yard the day before we got out. That’ll really fuck with him.

I blame the ’90s. After SCREAM there was a wave of these things, all the horror movies had to be whodunits. And THE USUAL SUSPECTS. Always gotta be a reveal at the end. Stupid. But it’s Christmas, I’ll forgive it.

Ben Affleck Charlize Theron Christmas Christmas crime Clarence Williams III Danny Trejo Dennis Farina Donal Logue Ehren Kruger Gary Sinise heists John Frankenheimer Vin Diesel
This entry was posted on Saturday, December 25th, 2010 at 2:46 am and is filed under Crime, Reviews. You can follow any responses to this entry through the RSS 2.0 feed. You can skip to the end and leave a response. Pinging is currently not allowed.