I was walking downtown the other day when I strolled past one of these fuckin things:

In the building that used to be The Adidas Store they now have a bunch of plastinated Chinese corpses posed as if they’re playing chess and football and shit. This is one of two very popular travelling exhibits. It’s been through here before, I’m sure most of you have heard of it (or even seen it), and they even had James Bond run through one of these type of exhibits in QUANTUM OF SOLACE.

I’ve heard from many people that it’s really fascinating to look at. To be honest I haven’t seen the exhibit, because the shit freaks me out and because I’ve read that they don’t have documentation of where the bodies come from and had to post a sign admitting that they could not be certain they weren’t the bodies of Chinese prisoners sold to them like horse meat to a dog food factory (paraphrase). I tend to believe there is something fishy going on here because I can’t imagine anybody would ask to donate their body to touring art exhibits.

But this is the first time it occurred to me: holy shit, this is just like Texas Chain Saw Massacre! The Chainsaw family would excel at putting these exhibits together. It’s been one of their hobbies since the opening credits of the original: 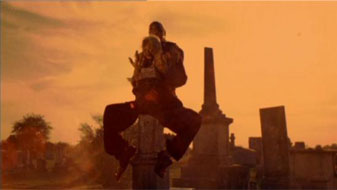 and really got rolling in part 2 where they have a whole underground amusement park decorated with skeletons of their victims made into furniture or posed into scenes from DR. STRANGELOVE or just sitting around, like the Grandma in her throne or like part 1 victim Franklin here: 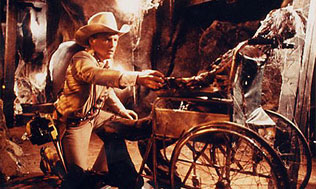 So, to that producer who’s doing the new TEXAS CHAINSAW movie who said he wants it to be modern day and “more urban” – I challenge you to get that in there somehow. The family visits Bodies: The Exhibition and know they could do better, or they try to open their own. Their bodies aren’t documented either, how different is it really?

By the way, some quick sight news: I have a backlog of partially written reviews of all the horror movies I’ve been watching this month. But I’m working every day this week so they’ll probly be leaking into November. Don’t worry though non-horror fans, I’ll try to get some other shit on here too as soon as Halloween is over.

Texas Chain Saw Massacre
This entry was posted on Thursday, October 29th, 2009 at 10:46 am and is filed under Blog Post (short for weblog). You can follow any responses to this entry through the RSS 2.0 feed. You can skip to the end and leave a response. Pinging is currently not allowed.