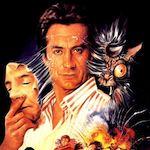 Rollie is approached on set by a dude named Lipton (Cliff De Young, DR. GIGGLES), who claims to be a big fan with some work for him. But the project turns out not to be a movie – he works for the Justice Department, and he wants Rollie to help him fake a death. Notorious mob boss Nicholas DeFranco (Jerry Orbach, BREWSTER’S MILLIONS) has turned state’s evidence, people are trying to kill him, if they can fake kill him maybe it will take the heat off until the trial. END_OF_DOCUMENT_TOKEN_TO_BE_REPLACED

Billie Jean would not be legendary if she put up with this type of treatment. Instead she goes to the store owned by the ringleader Hubie Pyatt (Barry Tubb, Wolfman from TOP GUN)’s dad (Richard Bradford, MORE AMERICAN GRAFFITI) and demands the $608 it will cost to repair the scooter. Mr. Pyatt pretends to be reasonable but then tries to get her to have sex with him for the money, which is very much not in the spirit of the request. As Billie Jean struggles to get away, Binx accidentally shoots Mr. Classy with his own gun. So Billie Jean and Binx and their friends Ophelia (Martha Gehman, F/X) and Putter (Yeardley Smith, THREE O’CLOCK HIGH) go on the run. END_OF_DOCUMENT_TOKEN_TO_BE_REPLACED