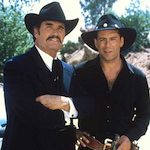 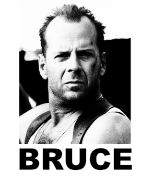 The upside is how nice it’s been to have everyone on the same page again and celebrating his great career and all the happiness he’s brought us over the years. That made me want to watch something of his I’d never seen before – thanks for the recommendations, everyone. I decided to check out Blake Edwards’ SUNSET (1988), since it’s from that period when Moonlighting was still on the air, and I truly believed Bruce represented the maximum coolness potential for a human being. The earlier Edwards/Willis joint BLIND DATE has a terrible reputation, but I liked it, so SUNSET seemed worth a try. END_OF_DOCUMENT_TOKEN_TO_BE_REPLACED

Billie Jean would not be legendary if she put up with this type of treatment. Instead she goes to the store owned by the ringleader Hubie Pyatt (Barry Tubb, Wolfman from TOP GUN)’s dad (Richard Bradford, MORE AMERICAN GRAFFITI) and demands the $608 it will cost to repair the scooter. Mr. Pyatt pretends to be reasonable but then tries to get her to have sex with him for the money, which is very much not in the spirit of the request. As Billie Jean struggles to get away, Binx accidentally shoots Mr. Classy with his own gun. So Billie Jean and Binx and their friends Ophelia (Martha Gehman, F/X) and Putter (Yeardley Smith, THREE O’CLOCK HIGH) go on the run. END_OF_DOCUMENT_TOKEN_TO_BE_REPLACED