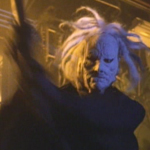 At least it was supposed to be an ’80s movie. It was made in ’88, but it went straight to video in ’91. So it’s from when Chucky and Maniac Cop were born, HELLRAISER, PHANTASM, SLEEPAWAY CAMP, RETURN OF THE LIVING DEAD and FRIGHT NIGHT were at Part II, and Michael Meyers was returning, but it came out when SILENCE OF THE LAMBS was best picture and they were killing off Freddy and moving on to finding people under the stairs and shit. It was left over from another era, not just in its approach to horror, but in its glorification of dumb fraternity assholes. It sort of centers on frat president Jeff Jacobs (Dean Hamilton, who went on to write, direct and produce such films as SAVAGE LAND starring Corbin Bernsen and BLONDE AND BLONDER starring Pamela Anderson and Denise Richards) and his rivalry with some other more preppie frat. They play such hilarious pranks as going to the other house’s presentation to tell parents “we’re the first homosexual fraternity on campus” and replace part of a film they’re showing with gay porn. END_OF_DOCUMENT_TOKEN_TO_BE_REPLACED