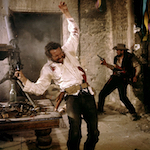 And Sam Peckinpah was hungry. He’d gotten into trouble with MAJOR DUNDEE in ’65, going over budget, fighting with the producer, getting it taken away from him and re-edited. His reputation took a hit, and he got fired from THE CINCINNATI KID a couple days into filming. Luckily NOON WINE, his 1966 hour-long for ABC Stage 67, was well received, giving him the opportunity for a comeback. So what the hell, he went and made an all-timer of a western, but a little different from his previous ones. This was a western made for a time when people were disillusioned about the war in Vietnam and the violent images it brought into their homes. END_OF_DOCUMENT_TOKEN_TO_BE_REPLACED CHERRY 2000 is a quirky post-apocalyptic adventure, one with a cool sci-fi western premise and alot of underlying oddness and satirical observation about life in the ’80s. The action is slightly stilted, and I think director Steve De Jarnatt (who followed this up with the pre-apocalyptic MIRACLE MILE) is more comfortable doing funny twists on the genre than sincerely following its tropes, but I also think there is a good faith effort to deliver the goods. There are lots of machine guns and blowtorches, some explosions, some great stunts involving a car hanging from a crane. When the weinery yuppie protagonist decides to man up he does it by setting fire to a bunch of cars and rigging an explosion that knocks over Tim Thomerson and swarms him with bees. Not bad. END_OF_DOCUMENT_TOKEN_TO_BE_REPLACED

To commemorate the 2 (two) new Spielberg movies that came out recently I decided to finally get aorund to watching all the Spielberg movies I’ve never actually seen. This is gonna include a couple that you guys will be surprised by because everybody else in the world saw them a long time ago. But mostly it will be the “lesser” Spielbergs. Not JAWS, CLOSE ENCOUNTERS or E.T. END_OF_DOCUMENT_TOKEN_TO_BE_REPLACED 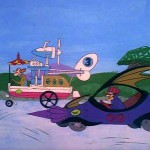 And then it says “directed by Sam Peckinpah” and BAM, no more widescreen. No, that’s just so the words will fit, we don’t need it anymore. The picture is square and cramped and the film is all faded and dark and you’re thinkin, “What is this crap, Hunter?” END_OF_DOCUMENT_TOKEN_TO_BE_REPLACED