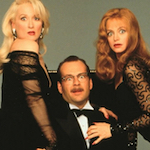 Director Robert Zemeckis had put his name on the blockbuster map with ROMANCING THE STONE in 1984, and then triple circled, highlighted and put stars next to his name when BACK TO THE FUTURE was a surprise smash hit the following year. Since then he’d made my favorite of his movies, WHO FRAMED ROGER RABBIT (1988), followed by the BACK TO THE FUTURE sequels (1989 and 1990). Those were all rated PG, and most of them were produced by Steven Spielberg, so Zemeckis was generally thought of as that kind of family friendly whiz bang popcorn movie guy. And now here he comes with this mean-spirited PG-13 movie aimed at adults, its wider appeal coming from the genuinely envelope-pushing ways it depicts gruesome bodily mutilations. END_OF_DOCUMENT_TOKEN_TO_BE_REPLACED

To commemorate the 2 (two) new Spielberg movies that came out recently I decided to finally get aorund to watching all the Spielberg movies I’ve never actually seen. This is gonna include a couple that you guys will be surprised by because everybody else in the world saw them a long time ago. But mostly it will be the “lesser” Spielbergs. Not JAWS, CLOSE ENCOUNTERS or E.T. END_OF_DOCUMENT_TOKEN_TO_BE_REPLACED