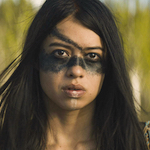 This is one of those times in the world of so-called franchise filmmaking when things somehow go surprisingly right. The PREDATOR series didn’t seem necessarily alive – PREDATORS had come 20 years after PREDATOR 2 and didn’t really catch on, THE PREDATOR came 8 years after that, was fucked over by the studio, only to flop and be hated by many, loved by few, if any. (Personally I enjoyed it for what it was, but I can’t deny it’s a mess.)

That was four years ago now, and since then there was little reason to believe anybody was trying to make another one. Little did we know that a little action movie that director Dan Trachtenberg (10 CLOVERFIELD LANE) filmed in the wilderness of Alberta, Canada under the code name SKULLS was actually a new PREDATOR movie. Later they announced it would go straight to Hulu (or Disney+ in some countries), reportedly due to some bullshit politics about the streaming rights for Fox theatrical releases going to HBO Max first. The fuckers. I’m jealous of the lucky sonofabitches who got to see it at film festivals and special screenings, where apparently it went over well. But even going straight to streaming might be kind of a lucky break culturally. Now everybody is talking about how much they like it, including people who probly wouldn’t have gone out to see it immediately, and we don’t have to read those articles about the movie that’s been really well received but is underperforming. (Because what is “performing” in streaming? Nobody knows. Maybe there isn’t such a thing.)

Being able to release such a widely appealing PREDATOR movie without making everybody see the trailer over and over again for months is ideal, at least until the first bunch to see it unleash the hyperbole about it being the best in the series. Then the rest of us might want it to live up to the impossible. But don’t worry about some goofball getting too excited. Whether or not it’s the greatest thing since getting to the choppah, PREY is absolutely a solidly constructed and very entertaining action movie, monster movie, and PREDATOR movie. 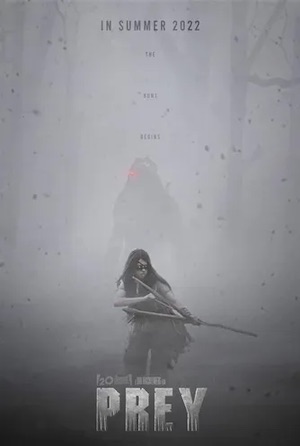 The genius of it is its straight forward simplicity. It’s neither trying to drastically reinvent the form of a PREDATOR movie or leaning too hard on nostalgia for the original. It’s confident that telling a PREDATOR-like story in this setting is enough. So it just settles in to create a good heroine, give her a good underdog arc, and a good battle to fight against a cool looking Predator (Dane DiLiegro).

Instead of cartoonishly muscular special ops agents (plus Shane Black) on a mission in South America, this one is about young Comanche hunters in the Great Plains in 1719. When a Predator buzzes the woods while Naru (Amber Midthunder, HELL OR HIGH WATER, THE MARKSMAN, THE ICE ROAD) is tracking deer with her dog Sarii, she interprets it as a Thunderbird, and an omen.

Naru has many talents, including medicine and tracking, but she wants to be a hunter. Even if her mother (Michelle Thrush, DEAD MAN, PATHFINDER) and the others were more understanding about her challenging traditional gender roles, she would live in the shadow of her brother Taabe (rookie actor Dakota Beavers).

When Taabe and some other young men go to hunt a cougar that attacked one of their own, Naru convinces her brother to let her help them track it. She believes she’s ready for a rite of passage called Kühtaamia, where she must hunt prey that’s also trying to hunt her. So she comes up with a plan to lure and kill the mountain lion.

Well, that doesn’t work out. She’s carried back home unconscious. Taabe thinks it’s her wounded pride when she insists that some things she saw – including a mutilated snake, a giant footprint and something in the distance before she got knocked out – make her believe there’s something out there much more dangerous than the lion. As is horror (and perhaps societal) tradition, nobody believes her, so she has to go fuckin take care of it herself. Or at least be the leader – since Taabe and friends come looking for her, they end up getting in on the fight too. Unfortunately for them. But they contribute to wearing the thing down.

I wonder if this was shot in some of the same parts of Alberta used in DEATH HUNT? It looks naturally beautiful (director of photography: Jeff Cutter, ORPHAN, THERE’S SOMEONE INSIDE YOUR HOUSE), though it’s unnaturally stocked with digital critters – bugs, mice, hares, snakes, deer, wolves, cougars, bears – representing a hunting hierarchy. At the top is this visiting Predator, who finds little challenge from most of these animals. One exception is the bear, who gets in some hits and makes the Predator’s invisibility device fritz out a little before being body pressed and bleeding out onto the Predator from above to reveal his shape (a new iconic image in the Predator pantheon). Naru witnesses it and warns Taabe about this thing that beat a bear easily, but that’s not giving the bear enough credit in my opinion. That fucker put up a good fight. R.I.P., big guy.

I suspect this Predator might be undergoing a ritual similar to Naru’s. He seems to have been dropped off, after all. Go hunt some stuff, boy. I’ll be back. (Maybe Dad was going to some planet for more advanced hunters.) I like that his tech is still more advanced than ours today, but in some ways looks primitive compared to the movies that take place later. For example his shield is electronic and collapsible but looks kinda medieval. And instead of a sleek metal mask his appears to be made out of an alien (?) skull (with electronic attachments – they are a spacefaring civilization, after all, not barbarians).

Written by Patrick Aison (Wayward Pines, Treadstone) with a story by Trachtenberg, this is a tightly constructed action story. I enjoy seeing the pieces get laid out – the moments when she learns things, the incidents that inspire elements of her ultimate plan to defeat him, the pieces of foreshadowing. I worried that Taabe’s return to town carrying the lion’s head meant the Predator would make a similar trophy out of him. Luckily he’s spared that indignity and it sets up something better.

One of the moments that shows Naru is special is when she’s practicing her tomahawk throws and comes up with the innovation of weaving a rope to tie to it and yank it back to herself each time she throws it. Only later do we see that the Predator has his own version of the same sort of idea (surely just given to him, not invented by him) and that he likes to give his blade a little flip before using it just like she does.

Part of what I love about PREDATOR and PREDATOR 2 that hasn’t been recaptured since (including in this one) is that they take place in this supercharged Joel Silver dimension with that Viva Val Verde spirit of the biggest muscles, guns and swagger and most intense handshake ever created by the cinematic military industrial complex. That’s what makes the original film awesome, but what makes it transcendent is that (much like the macho space marines of ALIENS the year before) it’s not enough – they strut on in just to fire hundreds of bullets into empty trees, scream into the jungle and proceed to get picked off, skinned, and strung up one-by-one. Dutch prevails not because he has the body of Mr. Universe, but because he has the brains of Arnold. He realizes he has to become a hunter – strip off his equipment, cover himself in mud, and outsmart the monster with strategy, tricks and simple traps.

PREY doesn’t have the same tone, but it does a more 2022-via-1719 version of the same theme. The other hunters have a less 1987, more relatable type of cockiness about their ability to handle the situation, and a sadly timeless instinct not to listen to the little sister, to assume she doesn’t know what she’s talking about. Though the movie and Naru obviously disagree with any assumptions about her that might be gender based, she does learn from and believe in their traditions. It’s important to her to protect her people from the Predator, but also to achieve the traditional status of a true hunter by defeating it. Initially I thought she wanted to prove something to the tribe, to her mother, to her brother, and to herself, but maybe that last one is already taken care of. Taabe is stunned/impressed when he finally sees what the Predator is capable of and realizes that she consciously chose it as her test. Wow.

I really like the brother-sister relationship here. He doesn’t fully support her hunting, is competitive with her, at times condescending. But he also gives her a shot when the others don’t want to, admits she deserves credit for his lion kill because he used her strategy, and realizes that she observes and understands things that he doesn’t.

Another element that complicates things is when they run into some Frenchmen. Like the Predator they’re invading the territory for some imbalanced hunting, slaughtering bison. (She prays for one of the bison.) They capture Naru and Taabe and try to use them as bait, and we get to enjoy the knowledge that these guys are gonna get fucked up by the Predator.

This ol’ Thunderbird-rider takes out quite a few humans, and the movie’s not afraid to be gory. Maybe due to the technology of the time he’s a more hand-to-hand fighter than other Predators, so there’s some fighting, our humans trying to get at him with arrows and axes and animal attacks. The stunt coordinator/second unit director is Jeremy Marinas (choreographer of CLOSE RANGE and GEMINI MAN).

I think the fun fan bullshit is handled well here, and in just the right amount. The biggest nod to the original is in dialogue, but it’s pretty cool because hey, these seem like the type of badasses who would also come up with that awesome thing to say. (Confession: I got up and did a little celebratory dance, thinking I was laughing about it at first, then realizing I was kind of serious, like Romy and Michele watching PRETTY WOMAN.) Others are more incidental – I like that Naru gets covered in mud by accident, and comes up with her own, different way to hide from the Predator. The only one that might seem off if you weren’t familiar with the material is the shot where (SPOILER FOR ONE THING HERE) they show the name on the musket to confirm for those of us who were wondering that yep, it’s the one we thought it was. Of course that also tells us that these peoples’ interactions with the Predator species are not concluded yet. Stay safe, Naru.

Ranking is pointless, but PREDATOR 2 remains my favorite PREDATOR sequel. It’s just such an unusual mix of early-‘90s-style big budget action with gory monster movie and near-future dystopian fever dream. It’s a very special movie unfairly dismissed at the time because Schwarzenegger chose not to come back (even though it stars fuckin Danny Glover!) and it seems to me like that specific type of magic is more unlikely to ever re-create than this will be.

P.S. I don’t remember ever hearing this “Yautja” word until very recently so I still call them Predators. Sorry if that’s racist.

Amber Midthunder Comanche Dakota Beavers Dan Trachtenberg Dane DiLiegro Hulu Jeff Cutter Jeremy Marinas Michelle Thrush Patrick Aison Predator
This entry was posted on Tuesday, August 9th, 2022 at 7:42 pm and is filed under Action, Reviews, Science Fiction and Space Shit. You can follow any responses to this entry through the RSS 2.0 feed. You can skip to the end and leave a response. Pinging is currently not allowed.