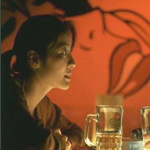 Like all right thinking citizens of the world I revere Michelle Yeoh as a superstar of martial arts films, and also respect her great gravitas as a dramatic actress. I don’t think there’s anyone else who is iconic on the level of Jet Li and Donnie Yen in kung fu films, but also has Yeoh’s level of success in non-action drama roles (including English language ones like SUNSHINE, CRAZY RICH ASIANS and Star Trek: Discovery). THE STUNTWOMAN is a 1996 Hong Kong film, her followup to WING CHUN, that bridges those two worlds. I definitely consider it a drama, not an action movie, but because she plays the titleistical stuntwoman we see her doing some of the good shit, and she also has one very satisfying opportunity to bust out a little bit of kung fu on some motherfuckers.

Ah Kam (Yeoh) has a kung fu background and several years of experience in mainland China, but is unknown to Master Tung (Sammo Hung, a little before directing MR. NICE GUY) when she’s sent over to fill in for someone on a movie his team is working. She’s surprised to get called into action when the actress disapproves of her male double. Right away we see her doing wirework for a Shaw Brothers style period movie, falling off of roofs, flying through walls, etc. They have to cut her down from her harness, and she tries to hide that she can’t move one of her arms. She’s a tough one, sometimes to her own detriment.

As you might guess, it’s a love letter to stunt professionals in the Hong Kong film industry and a romanticization of their lives. I took it as intentionally meta when Ah Kam was asked to demonstrate her kung fu for a job and she turned her face away from the camera the whole time. Ironically, though, Yeoh herself did a freefall stunt where she was seriously injured.

I’m sure it’s not completely authentic, but there’s alot of interesting details about working in the industry. It opens with a long tracking shot through the movie set to establish all the characters. They have squabbles with directors and locals. They wait around all day in the rain to shoot and end it ends up cancelled. They worry about losing gigs over conflicts they have nothing to do with.

There’s a family dynamic on the team and, being the only woman, Ah Kam gets stuck with being the mom. They like to stay out late drinking and smoking and she can absolutely hang with them, but we see her looking anxious for it to be over, especially knowing they’ll be up at the crack of dawn and expect her to be there too.

When a bunch of them are injured in a huge machete brawl at the Space Track pool hall and arcade it’s Ah Kam that watches after them at the hospital and checks in on Master Tung’s young son. She also has to sneak Tung out of the hospital so he can negotiate with the owner of the pool hall, Blackjack (Kent Cheng, Fatso from IP MAN 2, 3 and 4). This is an important scene because it introduces Master Tung’s flashy elephant hat. 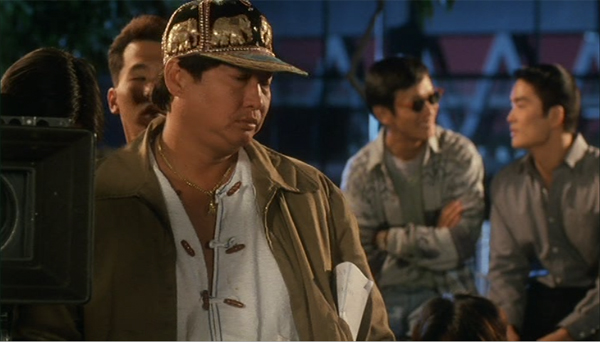 When she’s not doing stunts, Ah Kam is Yeoh in a performance unlike I’ve ever seen her do. She looks so young and wide-eyed, often shy and self conscious. She’ll come home bruised and exhausted to the tiny apartment she shares with a roommate (Crystal Kwok, POLICE STORY 2) and might have to go sit in the diner and try not to fall asleep if there’s a guy over. Otherwise she’ll drop face first onto her mattress on the floor. It’s a vivid depiction of sharing a small space with someone, especially on different schedules.

She really cares about the team and also wants desperately to have their respect. She has to deal with shit the men don’t, but never calls attention to it. At one point another woman on set tells her “You’re really tough, doing all this with your period,” but she’s dismissive of it.

A great moment is when Master Tung is in the hospital and very matter-of-factly tells her “You’ll stand in for me tomorrow.” She looks absolutely terrified, but on set she rises to the occasion, takes charge, fights for her vision. I love when the mullet-sporting, Zubaz-wearing goofball Copy (Mang Hoi, YES MADAM!, NO RETREAT NO SURRENDER, SHE SHOOTS STRAIGHT) questions her and tries to stymie her by refusing to do a falling stunt and it cuts to her in his costume getting ready to do it herself. There’s alot of tension, but they make up, because it’s a movie with the good ol’ comradery.

It seems to me like Tung kind of has a thing for Ah Kam, but he’s supportive in a fatherly way when she starts dating this guy Sam (Jimmy Wong Ga-Lok, PORTLAND STREET BLUES), even though he’s an obvious dickbag. At first Ah Kam turns down Sam’s advances, but she finds him passed out on her stairs and brings him inside to look after him. We know she has some interest in him when we see her put on lipstick and then think better of it and wipe it off.

Sadly she does what he wants and ends up working as the manager of his karaoke bar, dealing with drunk rich guys hitting on her and, on the rare occasions when he’s around, is treated like his property. The happiest moments are when her old stunt family comes to the bar, and they all hug and seem proud of her. The saddest ones are when she uses her skills to deal with some assholes and the bosses have the nerve to get mad at her about it. 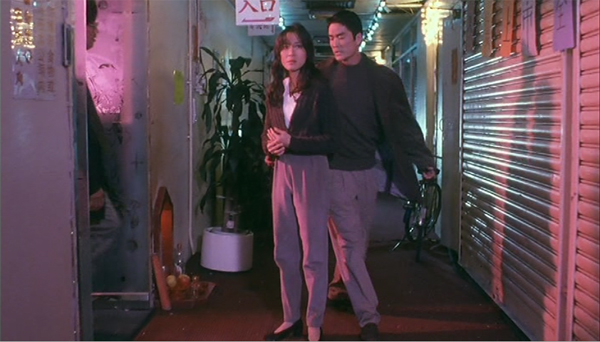 Other than the brief fight, my favorite thing about this stretch is how well it captures the feeling of being tired after a long closing shift. With the bar closed, she sits down to have a smoke and rest her sore feet. 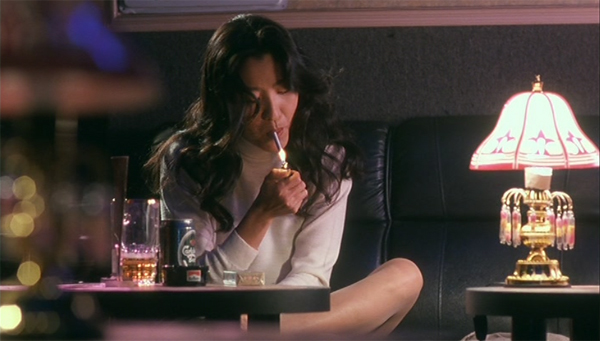 There’s some tragedy in this movie. SPOILER – when Master Tung is killed, Ah Kam has become so close to him that she’s given his belongings and his son. She jokingly called him “daddy” at one point, but she’s mistaken for his widow. This is when the movie gets less grounded. The kid plays pranks on the gangsters responsible, and it leads to a pretty cool fight on a swinging pirate ship carnival ride. She jumps from the boat onto a monorail as if she’s gained the acrobatic powers of the fictional characters she portrays in movies. Ching Siu-Tung is credited as martial arts director (around the time he was directing Jet Li in DR. WAI IN THE SCRIPTURE WITH NO WORDS).

There’s some mystery and flashbacks about what really happened, and you hope maybe the master is really alive. But the story is about dealing with the loss of him. Ah Kam hides her sadness behind sunglasses, and Tung’s son has learned that expressing his emotions is weak. When they watch an old home video together they both cry, but when she looks at him he rolls over and tries to hide it.

I have to admit to some ignorance here: I didn’t know there was a major Hong Kong new wave director who was a woman. Ann Hui studied at the London International Film School, where other alumni include
Michael Mann, Mike Leigh, George P. Cosmatos and Boaz Davidson. After graduation she returned to Hong Kong and became assistant to King Hu – I think this would’ve been around the time of THE FATE OF LEE KHAN or THE VALIANT ONES. She started in television, including documentaries for public broadcasting, and some of her works were banned. Though she wasn’t above directing the ghost comedy THE SPOOKY BUNCH (1980) or wuxia movies like THE ROMANCE OF BOOK AND SWORD (1987), she was acclaimed for her many issue movies, including a trilogy about Vietnamese refugees. Her 1982 film BOAT PEOPLE won best picture and director at the Hong Kong Film Awards, which she’d win many times over the years, most recently for OUR TIME WILL COME in 2018.

THE STUNTWOMAN is her fifteenth film as director, and she also worked as an actress, so I’m sure some of it is inspired by things she experienced, saw or heard about in the industry. It’s definitely more nuanced about its female perspective than many of the Hong Kong movies I’ve seen. The script is by Chan Man-Keung (LEE ROCK, DEADFUL MELODY, KUNG FU HUSTLE) and John Chan Kin-Chung (KING OF BEGGARS, FONG SAI YUK I & II, EXTREME CHALLENGE).

About the stunt Yeoh was injured on: Ah Kam is upset and distracted by her personal life and having trouble dropping 18-feet from a freeway overpass onto a moving truck, so Master Tung pushes her off. We see on the end credits outtakes that Yeoh really did the stunt – onto stationary padding, not a moving truck – and couldn’t get up – she had cracked a rib and dislocated her neck. In the movie Ah Kam was flailing too much the first time and had to redo the stunt – I hope they shot that part first!

Much like Ah Kam would, Yeoh lays there looking serene, like it’s not a big deal, until they lift the mattress and put her in the back of a van to bring to the hospital. That was when Quentin Tarantino famously visited her in the hospital. “I didn’t want to see him because I was in a body cast and couldn’t move,” she told told The New York Times in 1997. “But he insisted on seeing me and sat on two pillows at my feet [emphasis mine] and recounted my movies frame by frame.”

It was only a year later and she was on the international stage, promoting TOMORROW NEVER DIES and talking about the stunt-gone-wrong as a funny story. “I heard a snap on my back when I landed and said, ‘Uh-oh, I’m going to be paralyzed for life.”

This isn’t my favorite Michelle Yeoh movie, but it’s definitely a special one, and yes, one of her best performances. That said, maybe they should’ve hired her ones of those stunt doubles.

Ann Hui Hoi Mang Ken Lo Michelle Yeoh Sammo Hung stunts stuntsploitation
This entry was posted on Wednesday, February 12th, 2020 at 7:41 am and is filed under Drama, Martial Arts, Reviews. You can follow any responses to this entry through the RSS 2.0 feed. You can skip to the end and leave a response. Pinging is currently not allowed.