This year’s TRUE LEGEND is Yuen Woo-Ping’s first directational work since IRON MONKEY 2 in 1996. During that break he’s done some classic fight choreography, including some of the best ever in American movies (the MATRIXes, the KILL BILLs), but just hasn’t put himself in charge of a whole movie. So this is fun because it’s great wushu mythmaking and the master’s trademark fights working with a new pack of stylistic and technological weapons that didn’t exist 14 years ago. 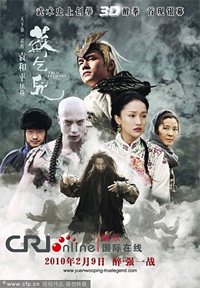 Vincent Zhao (apparently a TV star) plays Su, a great general who leads a band of warriors into a cavern to rescue an abducted prince. After a successful mission (SPOILER) the prince wants to promote Su to governor (same thing that happened to Schwarzenegger after COLLATERAL DAMAGE). Su convinces him to give it to his adopted brother Yuan (Xun Zhou) (even though the prince says he’s reckless) so he can go off to start a family and perfect his wushu, just like you or I would do if we had the time.

Five years later Su is doing some awesome moves and has a son named Little Feng and lives in a nice little place with his wife Ying (Zhou Xun) and his elderly parents. When Governor Yuan comes to visit Su thinks it’ll be fine, but everybody else is nervous because, well, things are a little more complicated than they were letting on.

See, Su’s dad did more than just adopt Yuan. He killed his dad for being out of control with the Five Venoms Fist. Then he raised them both as sons, but Yuan never let go of the “you killed my father” resentment. Oh yeah, and Su’s wife is Yuan’s biological sister, so that’s a little weird too. I’m not sure who raised her – hopefully Su and her didn’t grow up as brother and sister. Whatever the deal is Yuan loves her to an uncomfortable extent. I mean he doesn’t do anything, but I get a definite Flowers in the Attic vibe from him.

So anyway when they reunite Governor Yuan has turned into a damn supervillain. His flesh is pale as a corpse’s and Little Feng hides as soon as he gets a look at him. Not “I’m shy” type of hiding, but “holy shit my uncle looks like Nosferatu” type of hiding. That’s without even knowing that Yuan dips his fists in piles of spiders and scorpions to power his perfected Five Venoms Fist or that he has “dark gold armor” sewn into his flesh to make him nearly invincible. I guess since he’s a governor it’s legit but it still makes me suspicious, like I would be if a guy walked past me wearing a bullet proof vest but he wasn’t a cop or a rapper.

It turns out Yuan is pissed at Su for “stealing” his sister, which is bullshit because Su told him his intentions and Yuan gave him his blessing. He should’ve fuckin said something five years ago, but I guess he had a Revenge Master Plan taking advantage of the governorship, and he wanted Su to have a son so he could raise him as his own like Su’s dad did to him. (Such gratitude foster parents get. Geez.)

Okay, it’s a pretty good revenge, but I gotta call a guy like this out for being such a fuckin baby. People need to settle this shit man to man. Talk it out. Get it over with. It’s not worth dying over, stupid. Cool armor, though.

But I suppose we’re dealing with a genuine evil motherfucker here, so what did I expect? One example of Just How Evil Is He? is when one of his soldiers puts his hand on Ying’s shoulder, he says “Nobody touches my sister!” and slices the offending arm off. And it’s weird because they continue the discussion and don’t seem at all distracted by what just happened. You’d think the guy would be hollering and spraying blood everywhere, but he doesn’t. So many etiquette rules back then.

Yuan is really not good to his soldiers. I would strongly advise against taking any jobs with this guy. Another shitty thing he does is have soldiers bury his sister alive, then he kills the soldiers so nobody will know where she’s buried. You see, this is why we have unions.

Yuan also does things unbecoming of an uncle, like keeping Little Feng in shackles. He’s a good villain – larger than life, scary and easy to hate.

It’s an epic story. It skips over time at a couple points, goes into different portions of Su’s life. He has to retreat to re-train himself. He goes mad and thinks he’s battling “The God of Wushu” (Jay Chou, the new Kato) to prove himself. He becomes a beggar who enters an international fighting tournament like the one in FEARLESS. And one of the random white guys he fights is the star of PIT FIGHTER.

I like that it starts in fantasyland and ends like a FEARLESS or IP MAN type based-on-a-real-historical-figure movie. Su is the character also called Beggar So, a legendary master of drunken fist. In this movie he masters that style after the death of his wife, because she had made him wine and he missed her so he’d drink all kinds of wine and note that it’s not as good as hers.

Beggar So appears in the DRUNKEN MASTER movies, associated with Wong Fei-Hung, a movie and folk hero exaggerated from a real guy. He was one of “The Ten Tigers of Guangdong,” who I think were also real guys, but have been turned into fantasy heroes. So I think he originally was a real guy, but I’m not sure. Anyway, that must be why it’s called TRUE LEGEND. Also because Yuen Woo-Ping knows enough English to trick critics into writing “a true legend in his own right, Yuen Woo-Ping’s newest blah blah blah…”

But it’s true, and the true legend master delivers a whole bunch of great fights souped up with stylistic devices that might be borrowed from everything from THE MATRIX to 300 to even the camera moves of the Robert Zemeckis 3-D movies. In China it was actually released in 3-D, and I thought that would be amazing, especially the opening battle with sword fights on multiple levels of rope bridges with other soldiers falling in the background. But unfortunately Kung Fu Cinema reports that it’s only partial 3-D with crappy conversion that ruins the fights.

What I love is that the fights are so varied. You might be scared off that I mentioned there are some digital effects – some CGI weapons with cameras rotating around them and that type of shit – but he doesn’t repeat himself. He just lets loose. Lots of fighting styles, sometimes very grounded but then all the sudden there’ll be a little anti-gravity wirework flourish. When he meets the Elder Sage (Gordon Liu!) and the God of Wushu they’re balancing one on top of the other, on top of a tree, then they dart across the tops of some tall grass like a crazy cartoon character. The old man jumps onto his head and balances upside down while he talks to Su. (The CGI backgrounds in this part look pretty bad, but otherwise these scenes are great.)

Su is no match for the God of Wushu at first, so the god taunts him by folding his arms and striking lazy, casual poses each time he dodges a fist or a foot. Even the fights against mortals are super-powered though, with a great emphasis on breaking objects and structures, tearing through clothes, creating a blast of wind, all that kind of stuff. One fighter might just barely dodge a blow, but the opponent sliced through the back of his robe and now has smoke coming off those fingers.

Michelle Yeoh and David Carradine show up for small parts. Carradine is pretty bad, doing one of those “since nobody else here speaks English I don’t have to try that hard” performances the white guys tend to give in Asian movies. Actually it’s weird that Woo-Ping put him in here, didn’t Carradine talk a bunch of shit about him in a book or something? I guess it’s just like Beatrix Kiddo and Bill, it was hard to keep hating him despite what he’d done.

I guess this was a big failure in Hong Kong, but I really enjoyed it. It’s full of larger than life characters but also intimate emotional moments. The type of movie where a legendary warrior battles gods and supervillains, but ends up a hairy drunk living on the streets. And his luck changes again because a guy he gave a sword to back in the day recognizes him drunk on the street. I’ve seen some criticism of the episodic structure of the story. I can see not liking the tournament at the end because it’s similar to FEARLESS and IP MAN 2 (review of that coming soon), but I like the way it shows this guy through many years of his life, what could be a couple different movies (especially since this is a character who has been in a bunch of different movies and legends).

I wouldn’t mind some more movies like this about other true legends. And maybe use 3-D cameras next time.

David Carradine Gordon Liu Jay Chou Michelle Yeoh Vincent Zhao Yuen Woo-Ping
This entry was posted on Saturday, November 6th, 2010 at 7:09 pm and is filed under Action, Martial Arts, Reviews. You can follow any responses to this entry through the RSS 2.0 feed. You can skip to the end and leave a response. Pinging is currently not allowed.