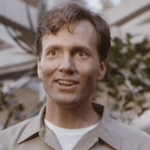 On June 3, 1992, historians will tell you, Bill Clinton played saxophone on The Arsenio Hall Show. Arsenio made his usual big entrance, and sitting in with his house band The Posse was the former Arkansas governor, then presidential candidate, wearing sunglasses, taking a solo on “Heartbreak Hotel” and later “God Bless the Child.” Whatever you think of his playing (or politics, or whatever), Clinton’s willingness to campaign outside of the accepted outlets and methods may have helped end 12 shitty years of Republican rule.

Have you considered, though, that a more important factor might’ve been STEPFATHER 3, which premiered on HBO the very next day, June 4, 1992? Maybe its trashy mockery of phony Reaganite assholes gave the pendulum that extra push it needed. And by maybe I mean definitely, I bet. Citation needed.

Part 3 is from yet another set of filmmakers – writer/director Guy Magar (a veteran of TV shows like The Powers of Matthew Star, The A-Team and Hardcastle and McCormick) and co-writer Marc B. Ray (Lidsville, New Zoo Revue, SCREAM BLOODY MURDER, Kids Incorporated) – but this time Terry O’Quinn did not return. Accordingly, there is an escalation in tawdriness. It’s supposed to be the same character, but now he’s played a little more broadly by Robert Wightman (AMERICAN GIGOLO), the guy who took over as John-Boy for the last two seasons of The Waltons. That’s a reference I remember people making when I was a kid but honestly I never saw the show to verify my hunch that it’s pretty good stunt casting to have him play this corrupted version of a family sitcom character.

Since this predates The Vosloo Precedent for recasting in non-theatrical sequels, the filmatists apparently felt a responsibility to explain why he looks different. The movie starts with a hooded figure walking through a scary neighborhood on a rainy night and meeting with a seedy back alley surgeon (Mario Roccuzzo, “Guard,” THREE THE HARD WAY) who will give him his new face. It’s in some filthy abandoned warehouse type place (“Don’t worry, I washed ‘em earlier” he says when our boy eyes the surgical tools) and he doesn’t have anesthetic, so he offers a bottle of booze, as these guys always do. But The Stepfather is a teetotaler, so he refuses. He does not scream, but winces and eventually passes out during a gory flesh-removing scene with closeups of eyes that do in fact look like O’Quinn’s. After he heals a while and the bandages come off, he slashes the doctor’s throat. 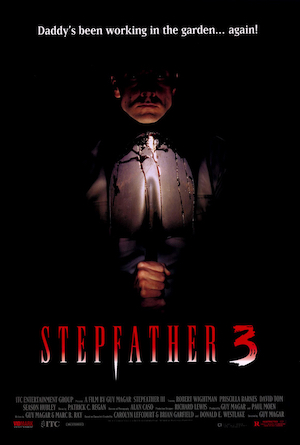 The original THE STEPFATHER was written by Donald E. Westlake, a.k.a. Richard Stark, author of the Parker novels. The second Parker novel, The Man With the Getaway Face, also opens with its main character getting plastic surgery from an underworld doctor to hide out after what he did in the previous installment. I suspect that’s a coincidence, but it is my duty to bring up Parker books whenever I see a window of opportunity.

When we catch up with The Stepfather With the Getaway Face he’s living under the name “Keith Grant” in a cottage in Deer View, California (“America’s Safest Neighborhood” according to his favorite publication, Suburban Family Magazine). He works as a gardener and has already found a church. Father Brennan (John Ingle, ROBOCOP 2) ropes him into dressing up as that important Biblical figure the Easter Bunny for that important Christian tradition the Easter dance. He looks like a total dork wearing a pink onesy with buck teeth painted on his chin, but for some reason single mother elementary school principal Christine (Priscilla Barnes, herself a sitcom late-season replacement actor on Three’s Company) immediately starts eyeing him. 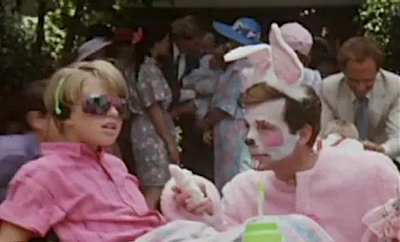 Christine’s son Andy (David Tom, Chris Carter’s A Brand New Life) is one of those movie kids whose corny precociousness is so over-the-top it might be a put-on. He’s in a wheelchair (but his mom confides that it might by psychosomatic). He loves his Walkman, of course. But his primary interest are a computer murder mystery game and a true crime TV show called Crime Search USA. While he watches he takes copious notes and even snaps Polaroids of the screen for later reference. The aforementioned Father Brennan, an elderly man, is his best friend – he seems to come to the house just to visit him, and they talk about the murder mysteries together. I won’t give it away, but Andy may or may not later hack into police files to prove that Keith is an imposter and pressure the Father into helping him spy.

He doesn’t seem very charmed by Keith calling him “Slugger” and shit. This is the most cartoonish of the trilogy, but Wightman’s version of the character really captures a dynamic I remember from growing up: mom’s new boyfriend who the kids don’t like and he lays it on thick to try to win them over and is so phony it makes him seem ten times worse.

Keith and Christine begin dating, and there are a surprising number of sweaty sex scene in this one. When Christine’s ex Mark (Stephen Mendel, THE VINDICATOR) starts harassing them, Keith kills him with a shovel, buries him in his yard and is later complimented on the flowers that grow out of him (“It’s a special fertilizer”). This is acceptable routine slasher business, but the Mark’s-POV stalker shots and the fact that we never really saw for sure who came out from those bandages got me wishing for a switcheroo where Keith is revealed to not be the Stepfather. He could be either an innocent guy or competition. Maybe that would be too fancy. 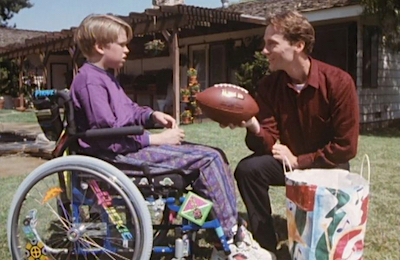 After Keith marries and moves in with Christine there’s a pretty audacious escalation. He’s disappointed that he can’t just throw a football at Andy or dump him out of his wheelchair and force him walk again. Then he sells his cottage to Jennifer (Season Hubley, HARDCORE), a new widow in town whose son Nicholas (Adam Ryen, CHILD’S PLAY 2) likes football. You can tell Keith is like “ah, fuck, I chose the wrong one!”

Also, while Andy spends time with his dad (Jay Acovone, OUT FOR JUSTICE), Keith finds out Christine is infertile and therefore can’t fulfill his request to pop out another son to play football with. So he goes ahead and starts dating Jennifer, which leads to comical running and hiding whenever all three show up in the same place.

As you’d guess, Andy sees a Crime Search USA episode about the crimes of parts 1 and 2 and figures out it’s the same guy. He has photos of both faces and for some reason uses a crude scanner to input them in his computer and put them next to each other on the screen, even though he can just hold them next to each other in his hand! Fuckin show off kids. Father Brennan reluctantly helps Andy with his research and finds out too much. R.I.P.

When Andy speaks at his funeral he’s introduced as “one of Father’s Brennan’s closest friends.” Nobody flinches. Another dumb little detail I got a laugh from is when Keith almost gets in an accident with a cabbie, who yells at him that he’s a moron. It’s your typical N.Y.C. cabbie stereotype operating in what we’ve been told is an idyllic suburban neighborhood.

Like part 2, this has a pretty good sense for making you anticipate a predictable fun thing, and then playing with it a little bit but being responsible enough to deliver on it. He has this mulcher/wood chipper thing he uses at the nursery, but he kills his boss (Dennis Paladino, SWITCH) with rake right next to it, and doesn’t chop him up. I’d kind of given up on it by the time it came back in the climax when he’s trying to put both his wife and his mistress in there.

Meanwhile, we can guess that Andy will have to overcome his psychosomatic paralysis to save his mom. He struggles to stand and walk and then god damn if he doesn’t tip over Keith’s ladder and flop him right into the mulcher.

No gore though. Nothing but net I guess. But wait! Andy looks inside and somehow Keith is clinging to the edge and tries to pull him in. Mom shows up and plays tug of war with Andy and together they knock Stepfather 3 into the mulcher and finally we get the gore we ordered as he gets turned into chum a section at a time.

It’s funny, I was thinking he would regret murdering that back alley plastic surgeon at the beginning, because who else is gonna get him in shape for another sequel? But I don’t think there would’ve been much the good doctor could’ve done for this.

Much like the bloody wedding entrance in part 2, part 3 goes out on a high note. Andy looks back at what’s left of Keith and says, “Happy Father’s Day. Slugger.” Just dripping with disdain like the nursery is dripping with Keith.

I cannot claim this is one of the great horror movies of the ‘90s, but it is a pretty good rendition of one of the types I enjoyed back then. Some of his one-liners (“Silence is golden, Mr. Thompson,” “After all, father knows best,” etc.) seem overconfident about how biting or amusing they are, but for the most part this pulls off the lowbrow goals it’s aiming for. So I can officially say that THE STEPFATHER trilogy is good one. Great part 1, fun part 2, totally ridiculous part 3 to mix things up. And then he dripped off into the sunset.

One day after STEPFATHER 3 aired – June 5, 1992 – Harrison Ford’s Tom Clancy’s Jack Ryan hit the screen in Phillip Noyce’s PATRIOT GAMES. I’m not going to be revisiting it, but it’s obviously a major summer motion picture, so go ahead and click on that review from 2014 for more ’92 context. That day also saw the release of CLASS ACT, which I covered in my very important and awards-snubbed review series Kid ‘N Play: 20 Years On Film: A Cinematic Legacy.

P.S. STEPFATHER 3 is not on DVD so I watched it on the VHS from Trimark Pictures, which includes the following trailers: LEPRECHAUN, A DEMON IN MY VIEW, SOMETIMES THEY COME BACK, BEYOND JUSTICE, PLAY NICE. Good times.

Adam Ryen David Tom Dennis Paladino Guy Magar Jay Acovone John Ingle made-for-cable-movies Marc B. Ray Mario Roccuzzo Priscilla Barnes Robert Wightman Season Hubley slashers
This entry was posted on Wednesday, June 29th, 2022 at 12:08 pm and is filed under Horror, Reviews. You can follow any responses to this entry through the RSS 2.0 feed. You can skip to the end and leave a response. Pinging is currently not allowed.