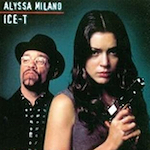 I didn’t realize I’d never reviewed HOME SWEET HOME. Next year, I guess. It probly would’ve been more fun than BODY COUNT, a thoroughly mediocre and largely uneventful low budget home invasion thriller, its one benefit being its recognizable cast. Daniel (Justin Theroux two years before MULLHOLLAND DR.) is bringing his girlfriend Susanne (Alyssa Milano two years after EMBRACE OF THE VAMPIRE) to meet and spend Thanksgiving with his very rich family, who he hates. They’re all much more snooty than him and ask him condescending questions about his job and if he’s still in “that cult,” which he clarifies was “Buddhist study group.” His drunk brother Justin (Nicholas Walker, Santa Barbara, who I honestly mistook for Linden Ashby the entire time) is particularly insulting, but somehow Susanne is nice about it to the point that it seems like they might end up together.

It takes almost a half hour to get to the thriller part, not only because of how much they want to establish that he doesn’t fit into the family, but also because there’s a surprising amount spent on the drive there. For some reason he starts swerving around on mountain roads “as a joke,” absolutely terrifying her, getting very close to ending both of their lives, but a few minutes later they’re pulled over, she can laugh about it and call him “honey” and they have out-in-the-open car sex even though they keep saying they’re two hours late. 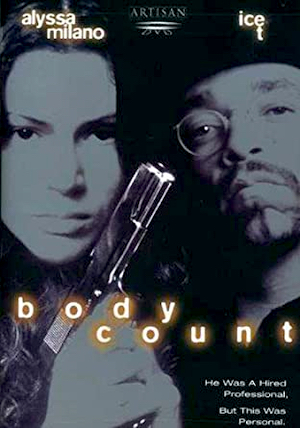 27 minutes in, when they’ve progressed to being at the house having sneaky downstairs couch sex, some guys come in and we hear screaming and gun shots and then see some white dude named Cole (Richard Danielson, SUPERCROSS), followed by Tiny (Tommy “Tiny” Lister, hopefully not playing himself, since he had just played the president in THE FIFTH ELEMENT and shouldn’t need to be out doing crimes) then a guy apparently named Jim (Ice motherfuckin T two years after JOHNNY MNEMONIC) and they’re loading paintings into a big truck.

Jim and Tiny are the most appealing characters in the movie, though the actors have very little to work with. There’s a joke that Tiny is distracted by a bet he has on a Bulls game and keeps getting very upset about it. Jim can’t believe Tiny is making bets when they have this job for, he says, fifty grand. I don’t want to be judgmental, but isn’t that a pretty pathetic sum for a crime that requires slaughtering an entire family of rich people and their help? It’s gotta be at least ten murders there and if they split fifty grand three ways they’re only getting $16,666.66 for it. I guess he could’ve meant it’s for fifty grand each, but is that a flat rate, or an assumption based on presumed value of and ability to sell the stolen paintings? That can’t be a sure thing. No sir, I don’t think this is a good crime.

Anyway, the gambling subplot gets more comical when Tiny confesses that he’s so addicted he makes “mind bets.”

“I make bets in my mind. Sometimes I bet ten times a day.”

Susanne is nice enough, but you kind of worry why she would be this reckless driver douche, and then she gets a little annoying when she starts being traumatized by a supposedly scary mural of burning buildings that Daniel says represent Sodom and Gomorrah. Despite how fragile she seems, as soon as she starts to talk about the trauma of seeing people die Daniel makes it all about him and gives a monologue about his brother dying in his arms after a climbing accident.

Susanne has tremendously bad luck, because when she’s trying to be quiet to hide from the thieves a fuckin tarantula suddenly crawls onto her hand, causing her to gasp and give away her location. I actually have to give her huge credit for that one because there is no way I would react with a mere gasp.

For sure the very best and maybe only good part of the movie is when Ice-T as Jim tells Cole he hasn’t bothered packing up the Sodom and Gomorrah mural because it’s “amateur hour.”

“So what, you’re a fuckin art expert now?” Cole asks.

It’s possible that in the script he was supposed to be making a sarcastic comment, but the way Ice-T delivers it (and follows it up when Cole doesn’t believe him) it plays like yes, stupid, he is literally a fuckin art expert. I like it.

There’s a twist that’s easy to see coming but that I was grateful for in that at least it switched things up from the boring cat and mouse chase that’s really more like a mouse in one room being scared and a cat in a different room not doing anything. SPOILER Daniel is revealed as the person who hired the thieves to steal the paintings and told them to kill everyone. Theroux gets to switch to over-the-top crazy guy mode, sometimes sounding oddly similar to Heath Ledger’s Joker (though more self conscious, I’m afraid). You assume it’s because he wants the money and resents his family, but then it seems to be more that he’s just a psycho. Oh yeah – that explains the swerving in traffic at the beginning. He makes a pretentious speech about the Sodom and Gomorrah mural and how he’s destroying everything to start over and he’s an artist and etc. Okay, whatever you say, bud.

Some trivia about Ice-T’s hardcore band, also called Body Count: Did you know they were recently nominated for a Grammy? Their song “Bum-Rush” was nominated for Best Metal Performance this year. Did you know this was not their first nomination? “Black Hoodie” was nominated for the same category in 2017. Of course most of us mainly know the band from their beginnings in the early ‘90s. They were introduced on a song (called “Body Count,” in fact) on Ice-T’s classic album O.G. – Original Gangster and performed with him for part of his set on the first Lollapalooza tour. That’s when they started playing the song “Cop Killer,” which became a huge controversy after it appeared on their 1992 debut album.

It’s a simplistic song written in the point of view of a guy who’s going to murder some cops because “fuck police brutality” and “better you than me” and “tonight we get even” and “for my dead homies.” It mentions police chief Daryl Gates and police victim Rodney King, but was released before the gang of cops who tasered, kicked and clubbed the shit out of King (and then joked and bragged about it in front of medical workers) were acquitted of all charges. It’s a disturbing song with little nuance, and I don’t think it’s very productive, but if you don’t understand why somebody would be angry enough (then or now) to write a song like that, you’re part of the problem.

Obviously police groups demanded a boycott of Time Warner products, threatened stores that carried the album, and tried to prevent the band from performing. President Bush, Vice President Quayle and prominent music scold Tipper Gore criticized the company for releasing it. To their credit, executives and some shareholders honorably defended Ice-T’s intentions with the song and his right to release it, despite having received death threats over it themselves. But eventually Ice gave in and had them reissue the album without the song.

The most publicized protest against “Cop Killer” was when THE OMEGA MAN himself Charlton Heston spoke at a Time Warner shareholders meeting. He said it was the executives he really blamed, since Ice-T – who has now been a recording artist and film and television actor for more than 35 years, including 20 years playing a cop on Law & Order: SVU – was just “trying for his 15 minutes of fame.” H 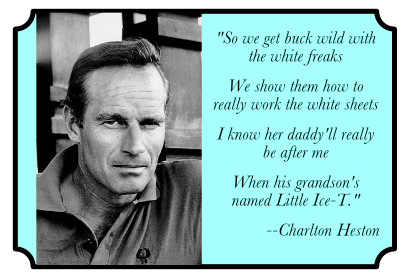 eston read some of the lyrics to “Cop Killer” and – bizarrely, since it was not removed from the album – “KKK Bitch.” I could only find clips of him reading “Cop Killer” (which he seems to have done at a bunch of different venues, including CPAC), but I think it’s fair to assume that he made “KKK Bitch” into a hell of a great monologue.

It’s important to discuss all this because a mere five years later somebody thought it made sense to change a movie’s title from BELOW UTOPIA to BODY COUNT (not to be confused with the movies of the same title from 1986, 1987, 1994 or 1995) just because it had Ice-T in it. That’s weird, right? What if THREE KINGS had been called THE FUNKY BUNCH? Or, worse, N.W.A? Also, I want to note that they randomly named it after Ice-T’s band when he has an album title (Home Invasion) that accurately describes the movie.

Anyway, to be fair, I have no idea what BELOW UTOPIA has to do with the movie, and it certainly doesn’t sound cool either.

I completely forgot about this until reading it just now, but in ’98 Ice-T released a CD called Below Utopia: The Lost Score. He actually made a score for the movie that they didn’t use. I don’t think I ever heard it, and it’s not on Youtube or Spotify, but it’s hard to believe it would be much worse than the generic cheapo keyboard score by Joseph Williams (PHAT BEACH, son of John Williams, third lead singer for Toto). So #ReleasetheIce-TCut, obviously.

Before watching BODY COUNT I think I mistook it for an Albert Pyun joint. In fact the director is Kurt Voss, who directed POISON IVY: THE NEW SEDUCTION in the same year (that’s the one starring Jaime Pressly, not the one starring Milano) and also wrote that drama WHERE THE DAY TAKES YOU that was Will Smith’s first movie. The screenplay is by Richard Shepard (THE LINGUINI INCIDENT, THE MATADOR, DOM HEMINGWAY, THE PERFECTION) and David Diamond (THE FAMILY MAN, EVOLUTION, OLD DOGS, WHEN IN ROME).

*Yeah, GeoffreyJar and others finally convinced me to start a Letterboxd account, so you can check it out for links to these full reviews and sometimes mini-reviews when I watch or rewatch something I don’t feel the need to go deep on. Also if anyone wants to train me up Pai Mei style I feel like a total beginner over there.

Alyssa Milano Ice-T Justin Theroux Thanksgiving Tiny Lister
This entry was posted on Monday, November 30th, 2020 at 11:23 am and is filed under Reviews, Thriller. You can follow any responses to this entry through the RSS 2.0 feed. You can skip to the end and leave a response. Pinging is currently not allowed.