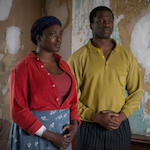 It’s about a refugee couple who escape South Sudan and are given a temporary home on the outskirts of London, only to find something evil there. It’s one of these stories that relates supernatural happenings to trauma and makes the line sort of blurry for the characters so they don’t at first know which one they’re experiencing. It benefits from great leads and strong direction by rookie Remi Weekes (also writer, with a story credit to Felicity Evans & Toby Venables).

We see glimpses of Bol (Sope Dirisu, THE HUNTSMAN: WINTER’S WAR) and his wife Rial (Wunmi Mosaku, BATMAN V SUPERMAN: DAWN OF JUSTICE) crossing the Mediterranean on a crowded boat. It’s a harrowing journey and many fall off and die, including a young daughter. Now they’re waiting in a tiny room for an unspecified amount of time, praying they won’t be sent back. It’s surreal when they’re finally called into a big mostly empty room where the bureaucrats whose decisions their lives depend on seem bored and annoyed to tell them they’re being released. Rattling off the restrictions they have to agree to like it’s a lecture. Yeah yeah, asylum, but you’ll be deported if you do this or this or especially that, but also many other things. One lady is eating an apple. But Bol can hardly contain his joy. 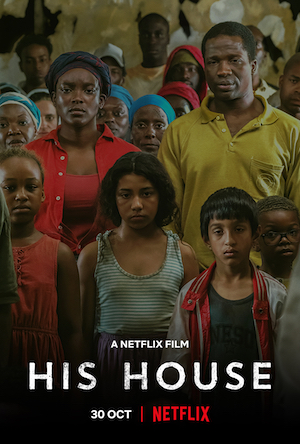 They’re taken to the house where they’ll stay – one compartment in rows and rows of identical homes, completely trashed, abandoned furniture out front, lights and oven don’t work, bug-covered pizza left by a previous tenant, neighbors stare at them out the window and don’t return waves. But according to their case worker Mark (Matt Smith, TERMINATOR: GENISYS [sic]) they lucked out, most of the refugees have to share one of these with others, but they get it to themselves. And it’s bigger than the other place they were staying. And it’s theirs, sort of.

Bol seems much more optimistic than Rial and much more anxious to assimilate. He doesn’t want to sit on the floor anymore. He insists on using silverware. Rial says she can only taste the metal.

Some of the movie’s tense scenes are not necessarily anything but regular world terrible shit. When Rial tries to go somewhere the directions are confusing, the paths seem to turn into a labyrinth. A white kid tries to tell her something and she rushes away from him. Later she approaches some Black kids in school uniforms but they’re mean to her and make fun of her English and tell her to go back to Africa. She can’t even trust the people who seem harmless here.

When the spooky shit starts happening it’s cool because it’s different for a haunted house to be this sort of public housing situation – basically two rooms, no furniture, dark corners mainly because the lights don’t work. And in addition to being haunted by fears and guilt about their daughter, there’s definitely anxiety about his feeling of ownership of and responsibility for this place, not wanting it to be invaded, not wanting the walls to crumble.

I like the dreaminess of it. In one scene he finds a rope in a hole in the wall and keeps pulling and pulling and it just keeps coming – that’s like a real dream I would have. A more cinematic type of dream image is when they’re eating and the camera pulls back and they and the table and the little piece of wall behind them are all floating in the sea, but he doesn’t seem to notice. I like that too.

There’s some pretty cool looking monster type imagery, and I like that (MYTHOLOGY SPOILER) it turns out to be not a ghost but a type of “night witch” that’s messing with them because it believes they stole something. It seems to be an idea based in African folklore, although I don’t know the background on it.

This is a powerful and well made “about something” type of horror, and I’m glad people are talking about it. Especially as an American, you have no choice but to keep thinking about the normal non-witch-related bullshit asylum seekers are being put through these days and think jesus christ, it would be even worse for these two if it was the U.S., if they even got in, and it would be still worse than that if the Trumpies got everything they wanted.

I think all non-assholes by definition have sympathy for refugees and immigrants, and a sense that the rising anti-immigrant sentiments in the western world are immoral and racist and in severe need of fucking off.  But our media and pop culture still tend to make us think of people from Africa and the Middle East as being so completely different from us. So I like how instantly relatable these characters (admittedly played by actors who grew up in England) are to westerners even if we have no concept of what they’ve been through, escaping a civil war.

If for some reason the people who make those cruel immigration policies watched this movie, I don’t think they’d be able to put themselves in these characters’ shoes. HIS HOUSE won’t stop the Stephen Millers. But I think art is still important because the more perspectives people see stories told from throughout their lives the more we can combat the onset of Stephen Millerism. More voices in the stories that help form how we see the world is the opposite of divide and conquer. This movie performs that important function in a completely captivating way. It’s not preaching and it’s not feeding you your vegetables, and these characters are allowed to be more flawed and complicated than just aspirational symbols. But it’s about a life situation I don’t think I’ve ever seen in a horror movie before. That’s cool.

But it would be dishonest to say I found it as potent as a horror movie as I did as an immigration drama. I feel like I might be a little too thick to understand the ending, and that might be causing me to underrate it a little. This might just be a nitpicky personal distinction, but when there’s horror that symbolizes something I prefer it to be done in such a way that it would not be diminished if you didn’t consider the subtext. I just think it’s stronger that way. That’s part of why I prefer US to GET OUT and CANDYMAN to THE PEOPLE UNDER THE STAIRS (even though I like all four). So HIS HOUSE ending on something that (to me, at least) makes more sense as symbolism than as narrative makes the conclusion feel lesser than everything that built up to it.

Also I just like horror movies, so I could’ve used more supernatural craziness at that climax. It doesn’t have to be EVIL DEAD level insanity, but maybe a little more POLTERGEIST? Throw a little slime on that bad boy. I feel like the movie and the audience both earned it.

So for me on first viewing this is one of those movies that feels great the whole time and then when it ends all the sudden it downgrades to pretty good, and that feels like a let down. But it shouldn’t, because pretty good is still pretty good.

apeth Felicity Evans refugees Remi Weekes Sope Dirisu Toby Venables witches Wunmi Mosaku
This entry was posted on Thursday, November 19th, 2020 at 12:16 pm and is filed under Horror, Reviews. You can follow any responses to this entry through the RSS 2.0 feed. You can skip to the end and leave a response. Pinging is currently not allowed.

6 Responses to “His House”