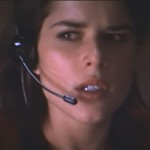 Well generally my favorite type of picture to write about is the crime type picture, the action picture or especially the Badass Cinema. I like bad motherfuckers like Clint Eastwood, Charles Bronson, Lee Marvin, Steve McQueen and these type of guys, guys who would knock your teeth out just because they wanted to make their nephew a baby rattle. From the younger generation I like Chow Yun Fat of Hard Boiled and a few of the Bruces, Willis and Campbell. But hey bud I also like a good horror picture and for my first Cool Girl guest review I felt I should do the big movie this week, this Scream part 3.

Now first of all I should point out I never even heard of Scream parts 1-2 but what the fuck buddy who gives a shit. What this is about is this killer named Scream, who wears a ghost mask and a black cloak. Because this picture takes place in our nation’s capital Hollywood, California, he can’t just bust into their house and kill them like a Michael Meyers might do, he has to actually call them up on the cell phone and make an appointment. Then they come meet him somewhere and he stabs them. He uses a knife instead of a gun, probaly to try to feel in touch with his roots. He feels that he is separate from the Hollywood phonies and that a basic tool like a knife is less pretentious, but it’s all a big front in my opinion. He has a movie about him called “Stab 3” being made and I think by the time you have your third movie-within-a-movie based on you you are pretty much a sellout as far as horror movie killers go. I mean did Michael Meyer put up with a movie about his life? Jason? Leatherface? No fucking way. These are guys who care about what they do, and they try their best to do it well. Sure they eventually lose their touch just like anyone, most often in part 2 or 3, but even then they stay down and dirty, none of this cell phone bullshit. They’re still chasing the girls through the woods, walking real slow, but somehow they catch up you know what I mean.

The only other one I can think of who fell into the Hollywood scene is Freddy, who had the Nightmare On Elm Street series made about him in Wes Craven’s New Nightmare but he is the exception to the rule and is not necessarily a role model who this kid Scream should be looking up to.

One difference between Scream and the other famous horror maniacs is the magic powers. Scream is just a guy in a mask, he has no magic powers, whereas a Freddy, a Jason, a Michael Meyers – magic powers. Freddy goes into dreams and turns into bugs and supermen and funny doctors. Jason and Michael have superhuman strength and are impervious to all weapons, you can’t even stake these motherfuckers or silver bullet ’em. Even Chucky, I mean he can’t do that much on account of his size but being a killer doll pretty much counts as magic in my opinion. Scream is more in the Michael and Jason silent but deadly school, no wisecracks and puns except when he’s on the phone doing business. And he hides behind a mask which counts for something in this type of picture. But still, no magic powers. And in my opinion that gives him more responsibility to kill in an artistically expressive manner.

It is like the difference between Batman and Superman. Batman has no magic powers, he can’t fly and what not, and he makes up for it by doing much cooler shit than that jackass Superman could ever do (sorry Kalspirit [Kalspirit is a junkie friend of mine who dresses up as Superman when he’s on a bender]). That is the standard this Scream kid should be held to but I gotta be honest, the boy doesn’t cut it. I mean yeah, he has the gadgets like Batman (bullet proof vest, talking machine that makes his voice change into the other people’s voices.) But he doesn’t have the technique.

When I see a part 3 horror movie okay, I already know the characters and story are most likely garbage. So at the VERY FUCKING LEAST I want to see some imaginative bloodletting. Alas, it is not to be in this day and age where people who make movies are trying to make it seem to the people who don’t watch movies that they are making movies that the people who do watch movies won’t like enough that they would go shoot up a high school in honor of it. So they gotta keep a delicate balance where the movie is halfway decent enough that some jackass would pay money to see it but not good enough that he would remember any of the specific scenes afterwards in order to recreate them.

Now listen up Scream, why can’t you be more like Leatherface? Now THERE’S a motherfucker who doesn’t talk, wears a mask, and like you he uses a cutlery type instrument for his work although I suppose a chainsaw is a far cry from a kitchen knife but still work with me here bud. There’s a guy who knows how to freak you out by killing somebody in the most fucked up way possible. Would Leatherface EVER settle for a straight chase-her-into-the-costume-department-and-then-stab-her? FUCK NO. He would at least think of some weird ass shit to freak everybody out, oinking like a pig or doing a little chainsaw dance or inviting her to dinner and then having grandpa suck the blood out of her finger. I mean let’s see some scary here, jack.

Anyway in Scream part 3 this guy’s ultimate goal is to kill Neve Campbell from the TV show Party of Five, who I guess he feels should be doing more good films like Wild Things. She lives outside of Hollywood on a heavily guarded property where the acting is good and there is no bad comic relief. But when she leaves home to join the same movie everyone else is in, things go pretty fucking sour in my opinion. The only major surprise in this movie is that Neve has a dog and it never gets killed. You don’t see that very often in a horror movie. In Halloween Michael eats a dog, in Freddy part 4 I believe there is a dog who pees fire, in Man’s Best Friend and Cujo the dogs kill everybody and then they die, in the Lost World the t-rex eats a dog. Neve’s dog doesn’t do jack shit or get jack shit done to it, but that’s okay, who wants to see some motherfucker eat a damn pooch anyway.

I didn’t really like most of the characters in this movie. Most of them don’t have much personality and then – going back to Leatherface again here – they don’t even have the decency to be killed in some fancypants way. Whatever happened to being force fed a poodle pie until your stomach explodes like that poor sap in the classic William Shakespeare/Vincent Price picture Theater of Blood? Where is the flair in today’s Hollywood murders, where is the art? Maybe it’s supposed to be a satire, saying that a big budget Hollywood killer like this Scream dude can’t think of anything better than to just stab a guy. How many times do we have to tell you, you don’t launch out on some big killing spree when you’re still reworking the damn script! And if you do I mean, at the very least you gotta give us some variety, you gotta think of some fanciful weapon like that spear gun Jason used in Friday the 13th 3-D.

Which reminds me, don’t these cinematists nowadays in 2000 know that part 3s are supposed to be in 3 fucking D? Have you no sense of history? You haven’t heard of a little film called Jaws 3-D? Real cinemaphiliacs DEMAND three dimensions from a part three. They wanna see something bouncing out of the screen. A yoyo maybe, or a paddle ball. Something gimmicky. And later on of course you got a hand reaching out of the screen to strangle somebody, an eyeball or two popping out, you got maybe a limb flying at us. I mean I guess in this case the 3-D would have only magnified the pussyosity of the filmmaking. What kind of an age are we living in where people get dismembered on The Simpsons but not in the slasher movies? I mean I can’t even remember any puddles of blood in this one, but still. Part 3-D is a cinematic tradition, one that deserves a little god damn respect from these young upstarts who learned filmmaking from playing nintendo. If you can’t shell out for the red and the blue then how do you expect us to give you the time of day? I would prefer the monochromatic blue 3-D myself but at least red and blue would be a step in the right direction.

I don’t know how Scream part 3 compares to a picture like Scream part 2 or even Scream part 1, but I do know this: it ain’t very funny and it ain’t very scary and sure as fuck ain’t in 3-D. I suppose it’s better than a few of the halloween or silent night, deadly night pictures but I mean, jesus. let’s hold ourselves to some standards here jack.

Courteney Cox David Arquette meta-slashers Neve Campbell slashers Wes Craven
This entry was posted on Friday, February 4th, 2000 at 8:00 pm and is filed under Horror, Reviews. You can follow any responses to this entry through the RSS 2.0 feed. You can skip to the end and leave a response. Pinging is currently not allowed.