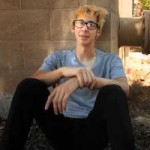 This movie is definitely a little more graphic than his others, but I’m not sure what it is that got it banned. At first I thought it was the goofy kid with the eyebrow ring eating out the soap opera star, because it looks like they did it for real. But it was probaly a pussy double. So then I thought maybe it was the bondage scene where the girl keeps rubbing the guy’s boner through his underwear. But then I figured maybe not, it might be the scene where the kid chokes himself while he jerks off on camera and cums all over his hand. I don’t think that was CGI, man. Also it probaly didn’t help when he went in naked and stabbed his grandparents to death while they were asleep and said in voiceover narration that it made him hard. 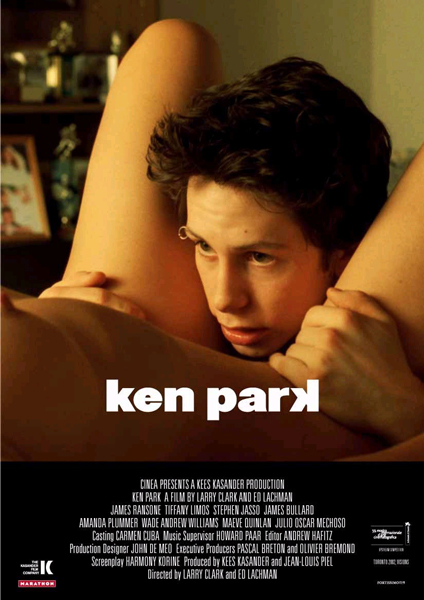 Okay I guess I can see your point Australia, but at least let the thing be shown. Freedom of speech, man. Banning is for sissy countries like post-Patriot Act United States. Censorship is not befitting of the proud country that created the Mad Max trilogy.

Anyway the movie begins real routine with opening credits over shots of a kid (Ken Park) skateboarding while a punk song plays. We’ve seen this same intro on GLEAMING THE CUBE, FREDDY GOT FINGERED and the Police Academy movie that had David Spade in it. As the credits finish up Ken arrives at a skate park. He spits, drops in, skateboards around. Then he stops, takes his backpack off, pulls out a video camera, aims it at himself, smiles, and blows his head off right there in front of everybody. And you can see where it would go from there.

The movie is a series of vignettes about four fucked up teenage characters and their relationships with the parents or guardians that would not be allowed to bring them to this movie because it ain’t for kids. If there’s a main character it’s probaly Shawn, who walks into a house where a little girl is watching videos of women’s asses in thongs and asks where daddy and mommy are. Then he goes into mommy’s room and asks, “Can I eat you out?” One thing I like about the movie is how it strategically reveals things one piece at a time. First we see that he’s having sex with this older woman. Then we see that it’s his girlfriend’s mom. Then we see that he actually comes over and hangs out with the family and jokes around with the dad, who he has a bigger dick than, according to the mom. Man, kids these days.

The best performance is the character of Claude played by Stephen Jasso, who was also in Clark’s TEENAGE CAVEMAN. He’s a smartass pothead shirtless skater kid but he’s the most innocent of the kids and even tries to get along with his dad at first. But his dad, a beer-bellied weightlifter, is ashamed of him being “a sensitive guy” so he breaks Claude’s skateboard. And later he does worse.

Another TEENAGE CAVEMAN alumni is Tiffany Limos as Peaches, who brings her Bible study boyfriend home to meet her religious fanatic dad. It’s not really that surprising when the dad catches her with the boy tied up licking his dick. More of a surprise is Tate, who lives with his grandparents and has no patience for them at all. There are obvious “shocking” scenes throughout this movie but the hardest ones to watch are when he starts yelling at his nice old grandparents for interupting his “work” to bring him food or for alleged cheating at Scrabble. It’s the kind of thing where it’s so repulsive that you start to laugh, and then you feel like an asshole for laughing.

Like one time I was on the bus and this guy was holding a folded up sweater. He turned to me and said, “Hey man, you got a sack for my sweater?”

I don’t normally carry empty bags around with me so I couldn’t help the dude. “Pee-imp!” he said in disappointment. I couldn’t tell if he was just giving me shit or if he was actually mad. He was pretty concerned about this sweater.

The bus was kind of crowded. He kep asking around and he seemed kind of mystified that nobody had an empty bag on them. Like he thought he must be on Candid Camera.

A couple stops later is the first stop in the ride free zone, which means all the drunks get on there. A guy got on with a can of beer in a paper sack. There was a space in the seat across from the sweater guy, so the beer guy and the sweater guy ended up sitting right by each other.

The sweater guy asked the beer guy if maybe HE had a sack. Well obviously he did, but it was in use. He looked down at his beer, shrugged like “Why not?” and generously took the paper bag off to donate to the cause of the sweater. But the sweater guy laughed derisively. “No man, I need a PLASTIC bag.” He put the folded-up sweater in the paper bag anyway.

So the sweater guy was satisfied but now the beer guy was left sitting there with this exposed can of beer on a city bus. I mean, what is he gonna do? He popped it open slowly, trying to be quiet, careful to hide it behind the seat so the driver wouldn’t see it.

At the next stop a couple people got off the bus, leaving some seats empty. To be polite to the guy he was sharing a seat with, the beer guy got up and headed for one of the empty seats. So there he is is standing there holding a beer right in the open, and the bus driver turns around and yells

YOU WITH THE BEER. OFF THE BUS NOW!

The beer guy hung his head down dejectedly and headed for the door. Just as he was about to step off he turned back around and said sadly, “But… he said he needed a sack.” Realizing it was no use, he turned again and got off the bus.

I don’t know about you Harry but to me that’s funny as hell but I feel like an asshole for laughing at it. Just because he was looking out for other people he ended up getting kicked off of public transportation. I shouldn’t laugh at that shit. I’m an asshole! That’s the same way you feel when Tate is calling his grandma a bitch or threatening to tear another leg off his three-legged dog Legs. It’s so not funny that it’s funny.

This is a totally unrelated copyright question, but do you think you could get away with making a horror movie called FEAR DOT ORG? Or I guess if you’re low budget like me it could be GEOCITIES DOT COM BACKSLASH FEAR. Hmmm.

Oh yeah but I think I was reviewing that pervy movie though. Anyway KEN PARK is sort of a followup to KIDS, but it was actually written first. Larry Clark made up the “characters and stories” based on people he knew, and had teenage Harmony Korine write the sometimes perversely great dialogue. (I wonder how that kid did in school?) It’s sort of between KIDS and GUMMO. There’s a little less of a plot than KIDS but it’s not as surreal and enjoyably random as GUMMO.

Of course, there’s no mistaking it for a movie by anybody who is not named Larry Clark. Larry really is a controversial director, not in the sense that he makes movies where people jerk off while they choke themselves, but in the sense that some people think he’s brilliant and most people think he’s just some pretentious child molester who has somehow escaped prosecution and passed off his home movies as art.

That’s why his movies are full of dumb people abusing each other, escaping into drugs and S&M and mindless violence. Everybody knows Mr. Clark is a sensationalist but the thing is he’s also a moralist. If you watch his movies, yeah, he’s trying to provoke and shock people, but you also get the feeling he’s pissed about these characters. I’m sure he has an affinity for them, and he definitely likes photographing their asses and the bulges in their tighty whiteys (and, as Bijou Phillips complained at the premiere of BULLY, “the cootchie”). But he also hates them. If you go through all of his movies you will find less than a handful of somewhat sympathetic characters and a whole pile of cruel, shallow worthless, hateful fucks.

In other words, he may have a thing for young people, but he hates young people. And people in general.

But that’s what I like about his movies. Add his unique world view to his great photographicry and talent with non-actors (and non-writers) he literally finds on the streets, and you get an interesting body of smut. There is something undeniably compelling about KEN PARK. As long as the Australian cops don’t bust in and shut off the power, it’s hard to stop watching. It’s not as funny and over-the-top as BULLY, and it could use more of Korine’s sick humor. But if you like completely unsexy pornographic art movies that start with a freckled kid blowing his head off and get worse from there, I would recommend KEN PARK.

If you see one completely unsexy pornographic art movie that starts with a freckled kid blowing his head off and gets worse from there this year, I bet it will probaly be KEN PARK.

Edward Lachman Harmony Korine Larry Clark
This entry was posted on Thursday, September 11th, 2003 at 7:36 am and is filed under AICN, Drama, Reviews. You can follow any responses to this entry through the RSS 2.0 feed. You can skip to the end and leave a response. Pinging is currently not allowed.