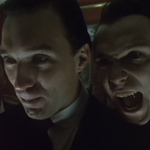 In fact, the first 20 minutes is about their childhood. We see their traumatic experiences during the war, and how much time they spent surrounded by women while the men were off fighting. They were protected by their mother Violet (Billie Whitelaw, TWISTED NERVE, THE OMEN, SLAYGROUND) and spoiled by their Aunt Rose (Susan Fleetwood, CLASH OF THE TITANS).

When it gets to them grown up they’re played by Gary and Martin Kemp, guitarist and bassist for the ’80s pop group Spandau Ballet. I know this much is true: the Kemps do look pretty similar with their hair slicked back, but they’re not twins, they’re two years apart. I’m not sure why the producers didn’t go for The Barbarian Brothers, who were probly available, having done three movies in ’89 but nothing else until DOUBLE TROUBLE in ’92. Oh, what might’ve been. For non-Barbarians, though, the Kemps do a good job. 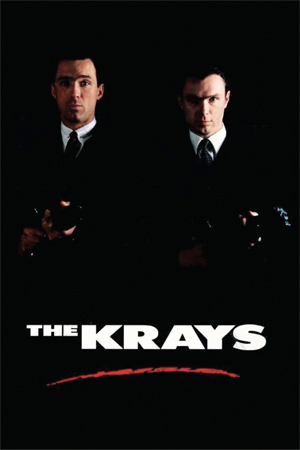 As young men the Krays followed their grandfather into professional boxing, depicted in the movie when grandpa Cannonball Lee (Jimmy Jewel) challenges the champ at a carnival. He loses, so Reggie takes off his tie, goes in and wins. Then Ron challenges Reggie and the two beat each other bloody until mom jumps in the ring to break them up. There’s something off about these twins, both in their attachment to each other and their love of violence.

That doesn’t mean they want to be soldiers, though. When they’re forced to join the Army they both punch their asshole superior officer in the face and just leave. It’s in military prison that they meet the gangster who recruits them for the protection racket.

When their violence is depicted it’s not very graphic, but it is brutal. The first time they muscle a guy – getting their first club by terrorizing another gangster who’s already extorting the place – they pin him to a billiard table and impale his hand with a sword. Then they make him say “thank you.” Later Ron gives one of his own men Joker-mouth, supposedly just for saying something rude to him. But even that’s just an excuse – he stages the whole dispute out of jealousy, to get his brother away from a girl.

That one’s before they really get out of control. The last incident is a stabbing of another one of their own guys, an old guy too. He’s in such a panic to escape that he rams his own head through a window. Doesn’t work.

Early on, the Krays are horrified by a Siamese twin fetus at a carnival, a “two headed baby.” But by the end of the movie they’re egging on each other’s worst tendencies and huddling together like a two headed psychopath. 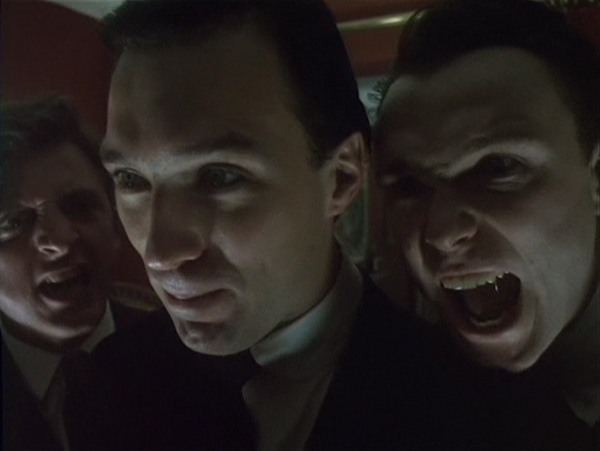 Ron’s sexuality comes up, but not in much detail. Mostly in one scene where he kisses a guy in a restroom. It’s not really clear if other people know about it, although a guy does get it for calling him a “poof.”

The women are important throughout the movie. It opens and closes with narration and dream images from their mother. The first scene is about Violet giving birth, surrounded by other women. When young Reggie gets sick, mom and three other women bring him to the hospital, and they don’t like what they see so they rough up the doctor and carry the kid back home. The Krays’ whole world is mother figures, though their dad (Alfred Lynch, UNTIL THE END OF THE WORLD) is around. The women all work together to hide him from the MPs so he doesn’t have to fight.

Even after becoming big shots the twins operate out of a small apartment with their mother, grandmother and aunts around. The ladies have tea while the gangsters have meetings upstairs. After Reggie’s wedding to Frances (Kate Hardie, CROUPIER), Aunt Rose breaks down about women having it worse than men during the war, telling a horrible story about killing a baby to save the mother, but “she died anyway, the poor cow. There was so much blood.”

That heartbreaking monologue is several times longer than the wedding itself, which is eerily depicted in one shot with blowing rose petals that match the gunfire from the previous shot.

Unfortunately Frances has less going on than Rose in a similar amount of screen time. We barely see her personality as he meets her at the club, brings her to meet mom, marries her. I think the first time we see her after the honeymoon is when the marriage has gone sour. Then she kills herself.

It’s interesting that they show none of the legal proceedings. We don’t see anything about the police investigating them, or even their arrest, or them in prison. After the final murder in ’68 it skips to 1982 and their mother’s funeral. The brothers are there, but the camera pans around to show that they’re handcuffed.

That sort of unorthodox approach to a gangster story is what makes it interesting, because it’s not a particularly slick or stylish movie. But it’s also hard to fairly judge its aesthetic qualities from the import DVD I saw it on, which is a poor and cropped transfer. (In the U.S. it’s only been released on VHS.) The music – a simplistic keyboard score – makes it seem pretty cheap, even though it’s by Michael Kamen. Maybe he did it as a favor or for fun, because by that point he’d already done DIE HARD and 25 or 30 other scores.

Billie Whitelaw Gary Kemp Jimmy Jewel Martin Kemp Michael Kamen Peter Medak Philip Ridley Susan Fleetwood
This entry was posted on Wednesday, March 9th, 2016 at 10:26 am and is filed under Crime, Drama, Reviews. You can follow any responses to this entry through the RSS 2.0 feed. You can skip to the end and leave a response. Pinging is currently not allowed.

10 Responses to “The Krays”