He plays U.S. Army Master Sergeant Johnny Gallagher, who I assume is respected for his skills, but he seems mostly just beloved for being a great guy. He’s introduced arriving for security detail at the site of U.S.-Soviet Union disarmament talks in West Berlin and walking around smiling and saying hi to everybody.

He and his squad, which includes the great Harry Lennix (of TITUS and the Funk Blast movie ride that used to be at the Experience Music Project here in Seattle), are assigned to patrol the woods, where they stop a backpacker couple but are told to hand them over to the German police who arrive on the scene. Unfortunately the cops are fake and release the backpackers to launch an attack (involving a pretty spectacular exploding/crashing car) and Johnny gets blamed. One thing I like about this scene is that they don’t play the backpackers as ominous in any way when they first appear. I fell for them really being some clueless locals who didn’t deserve to have guns pointed in their faces. 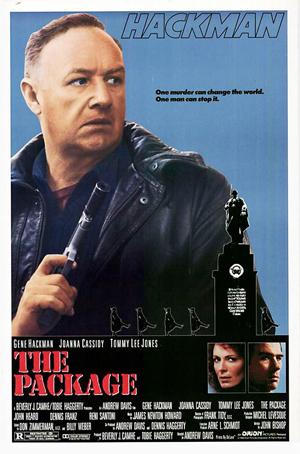 As sort of a punishment Johnny’s next assignment is to transport a prisoner introduced to him as Walter Henke (Tommy Lee Jones, right before FIRE BIRDS – Henry Silva must not have been available) back to the States for court martial. The prisoner seems to be a real rascal, in for playfully punching out superior officers, and he enjoys teasing Johnny about being too by-the-books. I like when he makes a little speech about his dad getting screwed over despite a life long love of America and Johnny asks, “What’d you do, read a book, Walter?” Seems like this is gonna be a fun MIDNIGHT RUN or GUNMEN type of back-and-forth deal, but when he escapes it quickly becomes clear that “Walter” (who is actually named Thomas Boyette) is very dangerous and seems to be involved in a complex assassination conspiracy intended to stop the treaty with the Soviets.

Meanwhile there’s a real Walter Henke (Kevin Crowley, MAJOR LEAGUE, DONNYBROOK) who has been put undercover with a white supremacist group. That’s how they’re described to him, and they have a big sign with Abraham Lincoln’s face crossed out, but they seem mostly concerned with hating communists and loving nuclear weapons. They’re definitely against a treaty.

In his quest to find his fugitive, Johnny goes to his ex-wife, J.A.G. Lieutenant Colonel Eileen Gallagher (Joanna Cassidy right after WHO FRAMED ROGER RABBIT) for help. This is a really unique element of the movie, because they’re divorced and in no danger of getting back together, but they’re happy to see each other, they like to joke around, and they refer to themselves as being friends. She tells him “You’re still a pain in the ass, Johnny Gallagher,” but in a way that means she’s still charmed by him. And she kept his last name, didn’t she?

It’s not only that relationship, but the novelty of Hackman playing a pretty likable guy that brings a surprising pleasantness to this still tense thriller. I like that Hackman is funny in it. My favorite part is when he infiltrates the white power group by brazenly walking in pretending to be bringing them a delivery. Everybody turns to glare at this intruder and he acts oblivious. He looks a guy in the eye and says “How you doin? Great day to be an American, in’t it?” Even without the second line it would get a laugh from me. He just pulls off the personality of a guy who would say “How you doin?” to somebody that’s considering shooting him. This is kind of an Axel Foley move!

Eileen learns how serious the matter is after she has her friend and colleague, Army 1st Lieutenant Ruth Butler (motherfuckin Pam Grier), look into it. Sadly, Grier (who was a legitimate co-lead in ABOVE THE LAW) is, let’s say, not in the movie enough.

Of course with Hackman in the lead it feels very different from a Seagal film. But it’s similar in that he’s playing the seasoned, respected soldier with old friends all over the place who discovers corruption within the military, tries to fight it, gets set up. And he’s got the opponent who has a similar military background but got disillusioned and turned bad. And, like ABOVE THE LAW, it ends with a news report telling us about the hero testifying in DC to expose the corruption.

Hackman couldn’t physically fight like Seagal, so his big action scene is just driving recklessly through traffic when he figures out where and when the assassination will take place. He has such bad luck that he hits both a bridge going up (but is able to jump it before it gets up very high) and a passing train. And his car gets more torn apart than is traditional in this sort of scene. I enjoyed that. The stunt coordinator is Terry J. Leonard (APOCALYPSE NOW, CONAN THE BARBARIAN, RED DAWN, COBRA; director of DEATH BEFORE DISHONOR starring Fred Dryer).

Davis and/or Leonard put in a few little details that I like. In a scene where Eileen is chased on foot through a parking garage there’s a rack of hanging bicycles that she runs behind and her pursuer knocks around like the hangers Michael Myers knocks around in the closet – that’s a sight I’ve never seen. And she goes around a corner where we see some cleaning products and then the guy chasing her comes around and falls on his ass. No need to show us the slippery floor itself. We get it.

They also get help from Chicago Police Lieutenant Milan Delich (Dennis Franz, who had been in Davis’s 1978 film STONY ISLAND). They go to meet one of his informants in a diner and it’s a set up where not only patrons but one of the cooks starts shooting at them. And there are less violent scenes that are full of tension, like when they try to catch up with Henke and have to try to push their way through a crowded peace demonstration because he’s with “nazi goon” counter-protesters.

In an introduction on the DVD and Blu-Ray, Davis says that the original script took place at Camp David, but he had it rewritten to take place all across Chicago, his home town and setting for almost all of his movies up to that point (the exception being THE FINAL TERROR, filmed in some woods in California). The script is credited to John Bishop, a playwright and script doctor whose other feature film credit is for DROP ZONE (1994).

Davis’s next film was UNDER SIEGE (1992), which is of course a Seagal film, and more directly action-oriented than this one. But I also see UNDER SIEGE as emblematic of the differences between ’80s and ’90s action movies. In Seagalogy I marked it as the transition from Golden Era Seagal (ABOVE THE LAW, HARD TO KILL, MARKED FOR DEATH, OUT FOR JUSTICE) and Silver Era, which had bigger budgets and more emphasis on action with exploding vehicles, missiles and machine guns. THE PACKAGE and UNDER SIEGE have more in common than just Jones having fun playing a villain. Both point their cameras in awe at the might and power of the United States government. The latter has its military hardware, its war room of high ranking military officers, its dress uniform ceremonies, its presidential visit. The former has multiple meetings and ceremonies with the leaders of the United States and the Soviet Union, and their enormous political and military entourages. I see THE PACKAGE as a precursor to movies like PATRIOT GAMES, CLEAR AND PRESENT DANGER, IN THE LINE OF FIRE, AIR FORCE ONE, and EXECUTIVE DECISION. (The Harrison Ford genre.) According to his obituary in the L.A. Times, Bishop did uncredited rewrites on CLEAR AND PRESENT DANGER, so there’s a direct connection there.

And of course the subject matter itself is, like the previous year’s RED HEAT and IRON EAGLE II, a sign that we’re moving on from worrying about invasion U.S.A.s and red dawns and moving toward trying to make peace. On December 2nd and 3rd, Bush and Gorbachev (who are never named in the movie, but the actors playing the leaders somewhat resemble them) had a real life summit in Malta that was considered by some to be the official end of the Cold War. Who knows if it ever could’ve gone down without that ol’ pain in the ass Johnny Gallagher?

Andrew Davis Dennis Franz Gene Hackman Harry Lennix Joanna Cassidy Kevin Crowley Pam Grier Summer of '89 Terry J. Leonard Tommy Lee Jones
This entry was posted on Tuesday, July 23rd, 2019 at 11:42 am and is filed under Action, Reviews, Thriller. You can follow any responses to this entry through the RSS 2.0 feed. You can skip to the end and leave a response. Pinging is currently not allowed.