One thing we’ve learned from the movies is that cops often come from faraway lands to follow a fugitive or transfer prisoners back to their jurisdictions, and when they do that they have to team with a screw-up from the local department and at first they hate each other and say ignorant things but over time the screw-up will learn from working with the foreigner and the foreigner will see something in the screw-up that no one else did and they will gain respect for each other and at the end they will be great friends to set up for the sequel that most likely will never come. Pat Morita came from Japan and did it in COLLISION COURSE, Jackie Chan came from Hong Kong and did it in RUSH HOUR, Clint Eastwood came from Arizona and sort of did it in COOGAN’S BLUFF, except he didn’t need the partner because he’s motherfuckin Clint. Well, here we got Schwarzenegger coming from Russia to Chicago to get the Georgian gangster who killed his partner and is bringing “the American poison” into their country. James Belushi has to escort him and Walter Hill has to escort the movie.

Of course Schwarzenegger doesn’t need Belushi’s help that much. He’s pretty good at just plowing through, having destructive vehicle chases and shootouts, doing detective work. He doesn’t talk much or explain what he’s doing. It’s funny because they kind of act like working for a “Big Brother” type regime causes him to use tactics that would be considered off limits in a democracy like the United States, and yet they’re the same tactics that we’re supposed to cheer on when American cops do them in movies. It’s a small world after all.

Honestly he deserves more respect. Back home they called him “Iron-Jaw,” here Belushi decides to nickname him “Gumby,” I guess because he’s wearing a blue suit, and blue is one of the two primary colors that you mix to get green. (?) Actually I have no clue why he calls him Gumby, but he repeats it a couple times, so he clearly thought we thought it was funny.

Maybe if Belushi had seen Iron Jaw in his element he would understand, or at least make fun of him in ways that have some sort of logical meaning that can be communicated to the viewers at home. The best parts of the movie are in the beginning when Schwarzenegger is still in Russia. In the opening scene he gets in a brawl with Sven-Ole Thorsen at a bath house. Unlike Viggo in EASTERN PROMISES they’re not completely naked, they’re wearing thongs. But the gimmick is that they bust through a window and continue the fight outside. So it’s two almost-naked musclemen fighting in the snow. There’s also a part where he bodyslams a guy and twists off his leg (because he knows it’s a wooden prosthetic filled with cocaine). The rest of the movie is enjoyable enough, but it doesn’t really keep up that type of inventiveness. 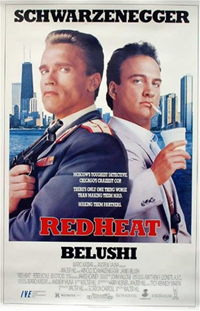 The idea for this one came from Hill and he wrote the screenplay with Harry Kleiner (BULLITT, LE MANS, EXTREME PREJUDICE) and Troy Kennedy-Martin (the original ITALIAN JOB). I’m surprised it has those old school writers on it though, because it seems very ’80s. It seems more like the guy who did 48 HOURS than the guy who did FANTASTIC VOYAGE.

The cast has alot of familiar faces in small roles. Peter Boyle is the commander, Gina Gershon is the villain’s American wife (a similar role to OUT FOR JUSTICE, but a couple years earlier), a skinny Cowboy Curtis era Larry Fishburne is a cop, and Brian James was in there, I think playing a friendly guy that they interview to get some information, but I might be confusing it with one of the SCANNERS movies I watched recently.

Belushi is fine, somehow credible enough as the typical ’80s action movie sardonic cop. I wonder how many roles like this Bill Murray turned down over the years? Seems like he would’ve played these type of characters if he followed a slightly more normal career path. He would’ve been just as good as Belushi at standing there droopy eyed, cigarette hanging out of his mouth, making belittling comments about everybody, but in a way where you don’t think he’s a total prick, just kind of a funny asshole.

But it all comes down to Schwarzenegger and if you like watching him even in one of his middle-range movies. I do, so it was worth my time. I wonder why it is, though, that if you’re a great presence or action star but they don’t think you can act they make you play Russian? I know he had already played American in RAW DEAL, COMMANDO and PREDATOR, but I still get the idea that Russian was something Hollywood thought was within his limited range. Dolph Lundgren played Russian in ROCKY IV, RED SCORPION and THE RUSSIAN SPECIALIST. Jean-Claude Van Damme played Russian in NO RETREAT, NO SURRENDER and BLACK EAGLE. Scott Adkins has had the most success as a Russian in UNDISPUTED II-III and also played Russian in THE TOURNAMENT. So here’s Schwarzenegger, the body builder who doesn’t speak English as clearly as some, what can we do with him in movies? Well, he can play Hercules, a robot, a Barbarian… and Russian. It’s weird, but I guess it can work. I enjoyed most of these movies.

(Seagal is a special case, if you’re wondering. He skipped directly to starring vehicle, so he didn’t have to play Russian to establish himself. Instead he came back later and did it [a little bit] in HALF PAST DEAD and DRIVEN TO KILL. Hopefully he’ll work in a barbarian and a killer robot at some point.)

RED HEAT was made by Carolco and filmed at the same time as RAMBO III. But while that one sort of blew it by dealing with evil Russians just as the Cold War was closing up shop, this one was timed just right. It’s about these two cultures not understanding each other but trying to work it out anyway. Maybe the governments they represent won’t be drinking beers together any time soon, but these two individuals were able to make a personal connection, and that’s the sort of optimistic we’re-all-in-this-together message that makes us feel good. Still wasn’t a big hit, in fact it made alot less than RAMBO III. But don’t blame the Berlin Wall coming down. It was right for the times.

Also apparently there was a video game: 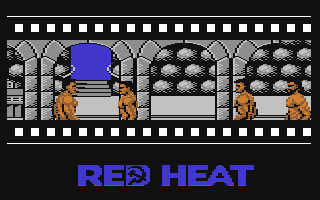 So get working on an EASTERN PROMISES one, game people.

Arnold Schwarzenegger buddy movies Carolco Gina Gershon James Belushi Laurence Fishburne Walter Hill
This entry was posted on Thursday, June 17th, 2010 at 2:11 pm and is filed under Action, Reviews. You can follow any responses to this entry through the RSS 2.0 feed. You can skip to the end and leave a response. Pinging is currently not allowed.