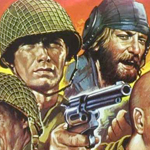 At times it can be kind of a broad comedy, and with that old timey type of military humor where they complain about their job but they just talk about hating to have to lug heavy things around, or get bossed around, they don’t talk about the psychological trauma of having to kill people, or almost being killed, or seeing their friends killed. But in a way this is a very subversive movie, because here’s The Great War, the one we can all get behind, the one that made them The Greatest Generation, and our titleistical heroes never even mention ideals or what they’re fighting for. What they end up getting behind is a big payday.

In fact, there’s a funny scene where the General (Carol O’Connor) overhears them talking over the radio, arguing over who gets to go, because no one wants to be left behind and miss out on the gold. But he thinks they just have the fighting spirit, so he gets excited and suits up to try to join them. 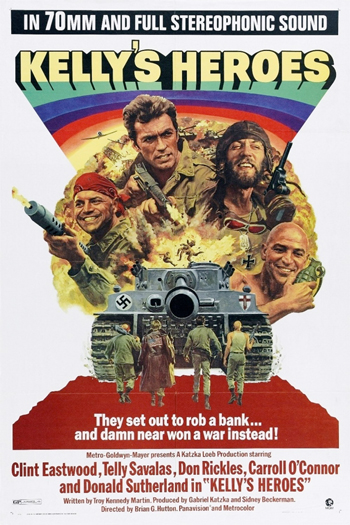 Clint is the leader and has the sort of narrow-eyed, no-nonsense badass presence we expect and  need. Savalas, as Big Joe, provides the rest of the manliness. The others are screw ups who cannot necessarily be counted on to come through. The most memorable character is Oddball, played by Sutherland. He seems to be some kind of time traveling, acid-damaged hippie, hanging around with a bunch of shaggy weirdos laying around like they’re on a commune. He’s also the provider of, and expert about, the tanks, so he’s valuable to the heist, even though he’s always talking about positivity and negativity, and really believes that the bridge they need to not be blown up will be intact if they all think positively enough. He’s also doing a pretty involved voice and New York accent. I wonder if Sutherland misses playing characters like that.

It alternates between trying to do alot of different things, which I don’t think is necessarily bad. I don’t usually like when somebody says a movie “can’t decide what it’s trying to be” or whatever, because maybe it wants to be many things. But there are definitely some shifts in tone here that seem a little off.

It’s bit of a comedy, but it’s more of an action movie. It’s not gory, but pretty violent for the time. Tons of explosions and machine gun spraying. Enough ammo is expended to remind me of that scene in PREDATOR where they all unload on an innocent jungle.

At one point some Nazis pass by them and they try to hide. I thought maybe they were gonna turn serious about soldiering and make the conscious decision to take out an officer. No, they only fight when they have to. The title and having seen other movies made me think they would end up learning a lesson and becoming heroes, but not really. They help the war effort, but only as a byproduct of stealing the gold.

They sneak around, try not to get blown up by mines. The attack on the town with the bank is a very effective suspense sequence, lots of strategy involving covering up the sound of their Sherman tank, and getting behind the Tiger so they can shoot it in its only weak spot. I like that the Tiger tries to spin its turret around and can’t do it because the road is too narrow.

Let’s talk about the music. The score is by Lalo Schifrin, and it’s good, though not one of his more memorable ones. The most notable part is the theme song “Burning Bridges,” performed by The Mike Curb Congregation. Curb was a guy who had scored THE WILD ANGELS, THE BORN LOSERS and a bunch of other movies, and was also the president of MGM Records. “Burning Bridges” was the Congregation’s biggest hit (#1 in Australia!), though they also had some success with a version of “It’s a Small World” from an album of Disney covers, were featured on Sammy Davis Jr.’s version of “The Candy Man” and appeared in the musical THE MAGIC OF LASSIE. Even Clint never co-starred with Lassie I don’t think.

I thought the cornball vocals of “Burning Bridges” added kind of a flower childreny touch to the movie, but I’m not sure Curb would like that characterization. In the same year KELLY’S HEROES came out he made a splash by dumping The Velvet Underground and other groups from MGM because he thought they promoted drugs. In 1978, Curb was elected lieutenant governor of California, a Republican working under Jerry Brown. Still, the Congregation found time to record “Together, a New Beginning,” the theme song for Ronald Reagan’s successful 1980 presidential campaign. So, not really the hippie I took him for.

Although it’s not in the movie, there was a single released of Clint singing “Burning Bridges”:

I like how the original song works in the movie, but Clint’s version is better.

(You know what, this just inspired me to order Clint’s album “Cowboy Favorites.”)

Curb and Schifrin also co-wrote “All For the Love of Sunshine,” the Hank Williams Jr. song that plays ironically over a vicious tank battle. It became Williams’s first #1 hit.

Scottish screenwriter Troy Kennedy-Martin is best known for THE ITALIAN JOB, but around here we know him as one of the writers of RED HEAT. He died in 2009, but apparently had already written Michael Mann’s ENZO FERRARI movie that comes out in 2017.

Director Brian G. Hutton was an actor who appeared in some movies and a bunch of TV shows, many of them westerns, and yes, including a 1961 episode of Rawhide with Clint. He started directing in ’65. KELLY’S HEROES was his fifth film, and the followup to WHERE EAGLES DARE, another ensemble WWII men-on-a-mission movie with Clint. But that one was more traditionally heroic. This one coming two years later you can tell at least a little bit of the Vietnam disillusionment rubbed off on it.

Hutton is also important because he’s the director of THE FIRST DEADLY SIN starring Frank Sinatra, and that was Bruce Willis’s first movie (as an uncredited extra). Hutton got that gig after original director Roman Polanski got into some, uh, legal trouble. Hutton’s last film was HIGH ROAD TO CHINA, the 1983 adventure movie starring Tom Selleck. IMDb trivia claims he “gave up direction in the mid eighties and became a plumber,” but a contradictory entry, as well as his obituaries, say it was real estate trading. I bet he would’ve been good at either one, though.

I noticed that there are no women in the movie. Interestingly, WHERE EAGLES DARE co-star Ingrid Pitt was cast, but her part was cut right before filming. I can’t imagine where she would’ve fit in, or why they would’ve decided against it.

At 146 minutes, the movie seems a little longer than it needs to be, and there are many scenes that would obviously be trimmed if this were made for modern attention spans. So I was surprised to read that that’s after the studio cut 20 minutes from it. Eastwood had wanted Don Siegel to direct, but he was busy finishing up TWO MULES FOR SISTER SARA. There’s no way to know if Siegel would’ve had an easier time, but Hutton, who did not have final cut, got screwed over by the studio in post-production. A new head of production took over at MGM, retitled the movie (it was originally THE WARRIORS) and re-edited it to be allegedly more commercial.

One of the deleted scenes, a transition from the second to third act, apparently had Big Joe discussing his disillusionment with the war and the reasons why Kelly was the scapegoat for the friendly fire incident. Clint said in Richard Schickel’s book Clint Eastwood: Interviews that the scene was crucial because it “just sort of summed up the philosophy of those loose ends, and what the war had done to them.” He felt the changes completely ruined the tone of the movie and made it unreleasable. He tried to convince MGM to let him have just one day in the editing room with it. Nope.

Their failure to please Clint was a good thing in the long run. He’d recently founded Malpaso Productions for 1968’s HANG ‘EM HIGH, and his frustrations with KELLY’S HEROES encouraged him to stick to movies he had control over. He wouldn’t appear in another non-Malpaso movie until IN THE LINE OF FIRE a good 23 years later.

I also think it’s interesting that the man who starred in this irreverent WWII comedy would, decades later, go the reverent route when returning to the subject as a director with FLAGS OF OUR FATHERS. In my opinion that’s not one of his better movies, but it (and especially its superior companion piece, LETTERS FROM IWO JIMA) show him looking at that war in different ways as he grew as a person and artist.

I’m sure Clint is right that KELLY’S HEROES should’ve been better, should’ve had more soul. I sensed it before I read that he had a problem with how it turned out. But I also sensed what it was trying to say about war beneath the hijinks. And it’s a pretty fun movie. I can’t be too mad at it.

Best piece of KELLY’S HEROES trivia: John Landis says he came up with the idea for AN AMERICAN WEREWOLF IN LONDON while on set as a production assistant

Brian G. Hutton Carol O'Connor Clint Eastwood Don Rickles Donald Sutherland Harry Dean Stanton heist Lalo Schifrin Mike Curb tanks Telly Savalas Troy Kennedy-Martin WWII
This entry was posted on Monday, January 4th, 2016 at 12:27 pm and is filed under Action, Reviews, War. You can follow any responses to this entry through the RSS 2.0 feed. You can skip to the end and leave a response. Pinging is currently not allowed.