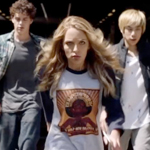 In the sequel we get to see a little bit of the creepy baby mask, but the mystery of who’s stalking her is pretty much irrelevant. Sure, they revisit it in alternate timelines where it’s different people behind the mask, but there’s not as much suspense to be wrung out of it, so it shifts a little away from the horror comedy and more into sci-fi comedy, again made fun by the character of Tree and the performance of Rothe. If anything she’s even a little better in this one. 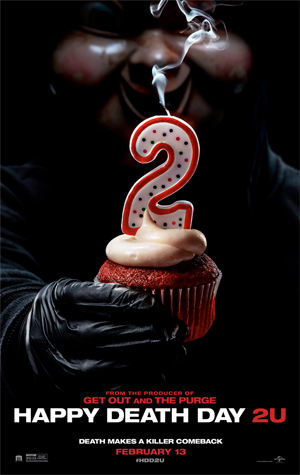 But it starts with Ryan (Phi Vu, KICKBOXER: VENGEANCE), the bleach blond roommate of Tree’s new geek boyfriend Carter (Israel Broussard, THE BLING RING) who you may remember repeatedly barging into the room saying something about vaginas before realizing there’s one in the room. This time it’s him who gets killed by the babyface and keeps reliving the same day. Luckily it’s a day some time after Tree’s birthday, so when he mentions de ja vu in front of her she immediately knows he’s stuck in a time loop and offers her expertise. And this time it’s safe to assume that they’re closer to the source of the problem, because for Ryan’s thesis project he and his friends built some kind of a machine in a lab on campus that has something to do with… quantum something something, and it’s been acting up.

Returning writer/director Christopher Landon (SCOUTS GUIDE TO THE ZOMBIE APOCALYPSE) finds plenty of fun new ways to play with the premise. I love that Ryan has the opportunity to go through his loop bringing along a person who knows for sure that it’s real and how to handle it. And then when Tree somehow wakes up in her original birthday loop there’s a great scene where she goes through all the familiar part 1 beats again, but screaming with maniacal rage the whole time because she escaped this fucking day and now here she is having to do it again. 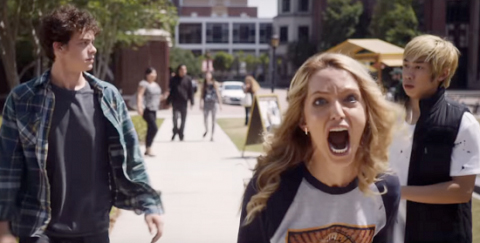 But she soon discovers that it’s not quite the same day. Things have changed. I like that she gets to explore a different relationship with her previously treacherous friend Lori (Ruby Modine) – from this we can infer that small decisions can change the trajectory of anyone’s life. Of course bad decisions could turn anyone into a murder, but it’s nicer looking at it from this reverse angle: not making bad decisions can mean a potential murderer can instead be a good person. This is the same Lori but she handles her situation better and now we can like her.

More significantly (SPOILER), Tree finds out that in this timeline her mother (Missy Yager, EIGHTH GRADE) did not die on her birthday. She’s still alive. I had honestly forgotten that Tree was dealing with the death of her mother in the first one, and unsurprisingly it had a bigger effect on me now that I’m in a similar boat. At first it’s this amazing gift of being with Mom again, but to make things right she has to come to accept that this is not the life she was meant to have, willingly give it up, and say goodbye. Somehow I managed to not cry in front of strangers like I did at MARY POPPINS RETURNS and BUMBLEBEE. But it took some effort. I bet it would be harder for a woman going through this, because there’s some specific mother-daughter stuff in there that might hit home.

My least favorite part of the first one was at the end when the boys explained the plot of GROUNDHOG DAY to Tree. This time they compare their situation to BACK TO THE FUTURE 2, and she’s never heard of that one either. Okay, at this point it’s kind of a funny running joke that Tree has somehow never heard of omnipresent movies. I can dig it now.

I personally have never been in a time loop, but I do believe some college kid’s science experiment made it so that the person in the theater who hasn’t learned how to keep thoughts inside is always sitting within ten feet of me. In this case it was a couple, and the first time a day repeated itself the guy said “Groundhog’s Day.” Like he didn’t know this was gonna happen. So for as long as I remember them, which hopefully won’t be long, I’ll wonder if they really went to HAPPY DEATH DAY 2U not knowing it was a sequel. Which actually is understandable – I know after I first saw the trailer for part 1 I did remember the title as “HAPPY DEATH DAY TO YOU.”

Anyway, the important thing is that this odd little franchise is turning out to be some very good product placement for the New Orleans funk band Dumpstaphunk, whose t-shirt Tree is still wearing for much of the movie because she’s still stuck in the same day. Congratz to them.

P.S. Let’s have a little bit of post-review SPOILER DISCUSSION for those who have seen it. The best part was the suicide montage, right? Especially the thumbs up. I was a little taken back by Tree volunteering Danielle (Rachel Matthews) for the experiment during the mid-credits scene. Were we really supposed to hate Danielle that much, or was this supposed to be Tree being a jerk again? Yes, Danielle cheated on Carter, but Tree didn’t want them together anyway. And Danielle went above and beyond helping them with their plan. Seems unfair. #JusticeForDanielle

Maybe it will make more sense in the novelization (which really exists!)

Blumhouse Christopher Landon Israel Broussard Jessica Rothe Missy Yager Phi Vu Ruby Modine time loop
This entry was posted on Wednesday, February 20th, 2019 at 10:51 am and is filed under Comedy/Laffs, Horror, Reviews, Science Fiction and Space Shit. You can follow any responses to this entry through the RSS 2.0 feed. You can skip to the end and leave a response. Pinging is currently not allowed.