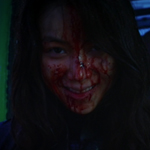 As her captivity, training and missions are depicted in somewhat elliptical fashion, the events leading up to that rampage also come out piece-by-puzzle-piece in flashbacks, not even in chronological order within themselves, and with some characters played by different actors in different periods. I find the story at times confusing and overcomplicated, but still compelling. Even if I didn’t, I’d still call THE VILLAINESS a must-see for the most audacious, envelope-pushing action filmatism I’ve seen in quite a while.

I’m not actually sure why Sook-hee (Kim Ok-bin [THIRST], but Min Ye-ji in the flashbacks) is called the villainess, but if she is one, who could blame her? That poor girl has been put through way too much. Like O-Ren Ishii she witnessed the death of her father from under a bed (his head sledge hammered, splattering blood on her face!) and never had time for dolls and jumprope (until the one she uses to tie around a guy’s neck and jump out a high window). She has two major long term relationships with men who are total liars, and one of them tries to kill her. Criminals attack her. The government enslaves her and makes her kill. The moment she finds out she has a daughter is the same moment she finds out that’s what they’ll use to make her cooperate. And SPOILER let’s just say this is a Korean movie, so bad things happen. I’ll leave it at that.

The world is shit and everybody is garbage. Leave this lady alone. 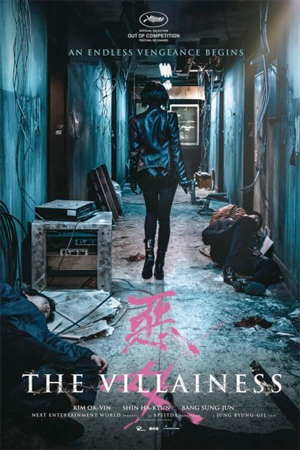 In the agency’s view they’re giving her a good deal, a chance at freedom and making a difference instead of the prison sentence she’s earned. Like xXx. But all the layers of facade are spirit-crushing. She’s not aware that they’re always watching her, that a group of boys are fighting over who gets to be her protector, that Jung Hyun-soo, her dorky neighbor in the rom-com section of the movie, is a plant. Yeah, I know, S.H.I.E.L.D. did the same thing to Steve Rogers, but it feels grosser when you see the guy falling in love with her while watching her on monitors, before they’ve met.

Still, these are the good guys. The other man in her life betrays her so spectacularly and on so many levels that it’s hard to really think badly of anybody else in the movie. Nobody can compete with that prick.

After the agency first grabs her, fakes her suicide, plastic surgeries her into a different actress, she puts up a fight, makes a run for it. She finds herself fleeing from a hospital room down a hallway and into a ballet class in progress. She pauses as if to wonder if it’s a dream. It’s painful when a woman leads her to a secret exit, only to turn on her right when she seems to be in the clear; moreso when she learns that the entire episode was pre-planned, and has to watch later recruits go through the whole thing themselves. But there’s a sort of camaraderie between those suffering through this, like people stuck in a shitty job who become like family.

Or at least some of them. There’s a mean girl assassin who tries to bully her when she arrives, which is kind of a kick. She pushes Sook-hee into sparring in sword-fight class and tries to go hard with her. Did you bother to find out if this new girl has been a trained assassin since the age of 10? Whoops. Ouch. That bully is in for a serious wooden-training-sword beatdown. But the next time they face off, in a race to assemble a gun and fire it, it flashes back to Sook-hee learning to do this as a child. The bully ends up on the floor crying, and I felt bad for her. She never does seem to learn her lesson, though.

It doesn’t matter how much you skip around in Sook-hee’s life, you’re gonna find some crazy violence. Beginning of the movie: massacre. Flashbacks: family tragedy, training for revenge, killing people. Rest of the movie: training to kill, assignments to kill. Sometimes it’s horrifying. Sometimes it’s awesome.

You probly saw the promo clip of the already famous motorcycle chase in which several riders sword fight while thundering through a freeway tunnel. Yeah, I see the transition from real speed-wobbling to green screens*, but I still can’t figure out how they did some of this stuff (the crashes must be real stunts?) and it never loses its sense of momentum or danger. More than anything it reminds me of the speeder bike chase in RETURN OF THE JEDI, a thrilling exception to the “practical is always better” rule of thumb.

And there are several action sequences, all very different from each other, that are just as mindblowing. Everything from sword and gun fights and long take chases to a battle on and inside a speeding and crashing bus. That opening made me think of the entirely-first-person action movie HARDCORE HENRY, which was very impressive on a technical level but unfortunately I found it interminable as a feature film. It proves that action is not just about imagining yourself in the place of the hero, but also seeing their physicality, their presence, their expressions. What good is an awesome move if they don’t get to pose afterwards? THE VILLAINESS does it right: they show off how far they can push this type of mayhem and then, right around the time our hearts are slowing back down to regular speed, they move on to the next technique. And they never get repetitive.

If you think about it the finale is like some FAST AND FURIOUS shit – she jams a water bottle on the gas pedal, kicks out the window, steers with one hand while sitting on the hood, jumps off onto a bus, swings around and kicks through the window, lands on board and has an ax fight, etc. etc. — but it’s all shot handheld put-you-in-the-middle-of-it style, not too shaky, and made to look like one continuous shot. It’s an over-the-top action movie that’s as technically astounding and “how did they do that?” innovative as ENTER THE VOID or GRAVITY.

I wasn’t familiar with any of the people who made this, so I’ll have to keep my eye out for them. The director/co-writer is Jung Byung-gil, who did the movie CONFESSION OF MURDER (2012) (remade this year in Japan as MEMOIRS OF A MURDERER). He also did a documentary called ACTION BOYS, about five people trying to become stuntmen. In an interview with Anthem Magazine he says “I did go to stunt school for six months, but I never worked as a stunt person.” He confirms that this experience aided him in pushing the action so far: “That perspective really helped me on THE VILLAINESS as well because I felt like I knew how to work with these stunt people. In turn, they understood where I was coming from as well because they knew my background. It created invaluable, mutual respect. I would ask them to try out new things that haven’t been done before and they were willing to attempt it and take the risk because we established that special connection.”

Man did that work. This is alot of movie. It’s every kind of melodrama  – revenge, betrayal, deceit, trauma, grief, more grief, love (of a father, a daughter, a boyfriend, a husband, a friend). There are dreams of better lives. She’s in her wedding dress about to go down the aisle when she gets a call to pull a sniper rifle out of a toilet and do a job.

It’s every type of thrill, every type of camera move or edit, and most of all every type of violence. Guns and knives and fists and feet of course, but also swords, hammers, hatchets, glass, vehicles. If you can’t take that sound of metal and then squishiness and then fluids and gurgling, do not watch.

It’s a 50-year storm of style and fury and I’m happy to ride the wave for as long as I can.

*Jung Byung-gil to Anthem Magazine: “Some people think we used CGI, but that wasn’t the case at all. We actually set up a real camera underneath the wheels.” I have no idea what that means. This article talks about the impossible camera moves, but it’s all speculation, and seems to assume it’s all real stuntwork.

assassins Jung Byung-gil Kim Ok-bin Korean cinema
This entry was posted on Wednesday, February 14th, 2018 at 10:16 am and is filed under Action, Reviews. You can follow any responses to this entry through the RSS 2.0 feed. You can skip to the end and leave a response. Pinging is currently not allowed.

12 Responses to “The Villainess”