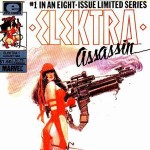 Jennifer Garner (Felicity) plays Elektra (they never call her Carmen) as a brooding, obsessive compulsive ninja assassin who has recently returned from the dead. (a little exaggerated there, in my opinion.) She imagines herself as a major player in some kind of mystical war between good and evil forces. I think you can interpret it a couple of ways, alot of people probaly take it literally and figure this is like CONFESSIONS OF A DANGEROUS MIND, this is telling us that the whole time we thought Carmen Elektra was just some chick on BAYWATCH or SINGLED OUT or whatever, she was actually also a ninja assassin. On this mission she goes to an island somewhere, it is not exactly a beach paradise but still she could be filming some pickups for BAYWATCH or MTV Spring Break while she’s there and then after she’s done with those she’s gonna assassinate some people. 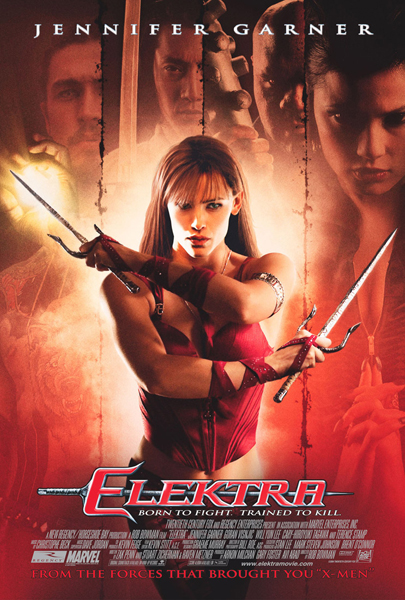 However, I think you could also take this as some poetical type of shit. Because she has this manager, he is actually called a manager and he is a dumbass Hollywood type of dude, and this is the guy who gets her work. So I think that sort of indicates that it is all a metaphor, the murdering with swords and ninja stars is actually symbolic of all of the acting or modelling or strip aerobics or whatever it is she does. This is more like DRAGON: THE BRUCE LEE STORY, it is telling the story of her life but it is kind of taking some artistic license so there’s demons and crap.

Of course also there is the issue of rights, like in that movie PERMANENT MIDNIGHT they couldn’t say that Jerry Stahl wrote for ALF while he was high, so they had to make up a fake puppet character. Well, they were not able to show that Prince was Carmen Elektra’s mentor so instead they made up this Prince-like character named Stick, who is played by Terence Stamp (THE LIMEY). Instead of a musician he is a martial arts instructor and instead of being an awesome guitar player he’s blind. He wears some pretty cool martial arts type clothes which, fortunately, cover the ass area completely. But still, it’s obviously Prince.

In the story she is fighting against some ninjas or gangsters or something called The Hand. This is not supposed to be the Pussycat Dolls I don’t think, maybe there were actually some ninjas she fought in real life, I don’t know. These guys have mystical powers, the tattoos of snakes and birds and stuff that they have on their chests can come to life and fly around to chase their prey. There is one guy who’s pretty cool, he’s a huge black dude with skin so strong it breaks Elektra’s sword, I think he might represent Dennis Rodman but I’m not sure. If so then when she drops a tree on him that means divorcing him.

I liked the mystical stuff and some of the fighting, but the overall tone of the movie is very quiet, serious and brooding, maybe a little too much. I appreciate that they take it seriously but it could use a little more badass to make it more fun. The opening (where Carmen is a scary unseen force coming in to murder a guy) is pretty cool, then she goes to stay in a cabin and starts building a relationship with her neighbor and his daughter, and it seems like a serious for-grownups-who-don’t-like-ninjas movie. Then her manager sends her the file of who she has to kill, it’s actually two people: her neighbor and his daughter, who she just had Christmas dinner with.

So obviously she’s gonna be upset – oh shit, this is the little girl, she’s so nice, and she reminds me of myself, what am I gonna do? She looks at it for a minute and then she says, “I’ll call you when it’s done,” and gets out her big ass bow and arrow and goes to murder these people. A nice way to celebrate the Lord’s birthday I guess.

That was a good moment, that was a surprise and that was a movie I wanted to see. At this point in the movie I actually thought wow, is this gonna turn out to be good? But of course, after targeting them and pulling the arrow back she has a change of heart and it goes back to what you originally assumed, the less interesting, more obvious movie where she decides not to kill them. Oh well.

So then she ends up protecting them from some other ninjas. There is some ninjas on the roof and instead of saying “Hey neighbor, watch out for the ninjas on the roof” she comes over and says, “Can I talk to you for a minute? Inside?” And the dude goes inside and while he has his back turned for a second she turns around, jumps up and stabs a sword through the roof right into the ninja. I mean she just knows where to stab – one stab and she hits ninja meat. Take that, ninja! That was some good ninja shit, but I think the problem with the movie is it needs more ninja shit.

Jennifer Garner looks a little bit like Carmen, I can see why they cast her, but they are trying to portray her as this hard-assed ninja bitch, and she isn’t entirely convincing as that. She can fight a little bit from that TV show she did briefly after Felicity, but she’s no Sonny Chiba. There aren’t any really extended fights. Every once in a while there’s a pretty cool move though. I liked when she was in a shrubbery maze and she used ninja sense to guess where her enemy was and then just threw the sword through about ten layers of bushes and hit her target in the head. Good job. Still, there is only one beheading in the movie, and she’s not the one that does it. So it could be better. What kinda ninja movie only has one beheading?

The big problem is we don’t get enough screen time of her as a ninja bitch. We get the opening scene and the part where she almost kills the neighbors, the rest of the time she’s pretty nice. When she has no morals she’s an interesting anti-hero, the rest of the time she’s more what you’d expect. At the end of the movie I guess she’s not an assassin anymore, so if she was a real person we’d feel proud of her but since she’s not, she’s a movie character, it’s kind of a bummer. I don’t think we ever did get to see her kill anybody with that bow and arrow. And now she’s retired.

See, we Americans got this problem where we sometimes try to do martial arts movies, but starring people who aren’t martial artists. If you saw GYMKATA like I did recently, you know what I’m talking about. Yuen Woo Ping has figured out how to train some of these people pretty good, they made it work in THE MATRIX and KILL BILL. But this is not on that level. If they had this same story but it was stringing together a bunch of amazing knock you on your ass and then you get up again and then before you can brush the dirt off your ass it knocks you on your ass again martial arts sequences, then I think we would’ve had something here. But when it only has the story to lean on it’s not much.

At the same time it’s not terrible, nothing was really unintentionally funny in it. And it did make me feel bad for Carmen Elektra, I didn’t realize she was going through all that. So, nice try. It’s an interesting idea.

UPDATE: Well, I feel stupid. It turns out this movie has nothing to do with Carmen Elektra, it is actually a spinoff of the movie DAREDEVIL. I thought I dreamed that movie but I looked it up and sure enough it exists, it is this crazy movie where Ben Affleck is a blind dude in a red gimp outfit that makes him look kind of chubby, and then the bad guy is Colin Farrell, whose super power is he can flick peanuts and paperclips really good. With that in mind ELEKTRA is actually a fuckin miracle, because its problem is it’s not very good, while DAREDEVIL is aggressively bad.

anyway I regret the error, sorry everybody

assassins Jennifer Garner Terence Stamp
This entry was posted on Sunday, February 11th, 2007 at 9:36 pm and is filed under Action, Comic strips/Super heroes, Reviews. You can follow any responses to this entry through the RSS 2.0 feed. You can skip to the end and leave a response. Pinging is currently not allowed.