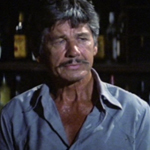 I guess the producer’s first choice to star was Paul Newman, who couldn’t do it so he suggested Steve McQueen, who was sick so he suggested Bronson. I guess if you have to have somebody fill in for Humphrey Bogart, it would be one of those guys, and Bronson might be the best for it. He plays the admirably named Giff Hoyt, who can’t return to the U.S. for unspecified reasons and instead runs a fancy hotel bar on the coast of Peru. 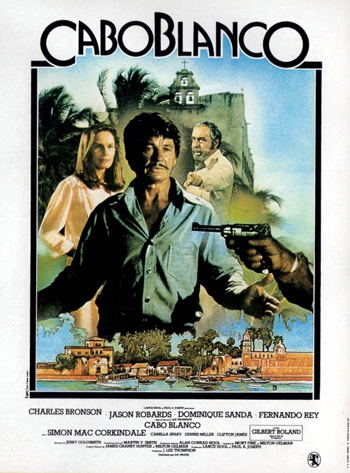 The filmatists tried to say that this was not a remake of CASABLANCA, and it’s definitely not as close as BARB WIRE, but the parallels are impossible to deny. Instead of fighting over transit papers, everybody’s trying to find some treasure believed to have sunk nearby. There are Englishmen pretending to be researchers, a young ex-Resistance fighter named Marie (Dominique Sanda, THE CONFORMIST, DAMNATION ALLEY), a corrupt police captain (Fernando Rey, THE DISCREET CHARM OF THE BOURGEOISIE). Marie kind of fulfills the Ingrid Bergman role, but Giff’s ex who he hasn’t seen in a long time is a smaller role played by Camilla Sparv (AMERICA 3000). Now she hangs out poolside with Giff’s scary crime boss neighbor Beckdorff (Jason Robards, ONCE UPON A TIME IN THE WEST, CRIMSON TIDE), who Giff suspects is an escaped Nazi war criminal. So yes, this takes place after World War II (a war both Bronson and Robards fought in in real life). Bronson’s collars look pretty ’70s to me, though.

Giff’s place is big and fancy, but it’s hard to argue it’s as good as Rick’s since it seems to be pretty empty most of the time and it doesn’t have any live music. It does have free breakfast, though. And a parrot.

It’s a big production compared to most Bronson movies, with nice Mexican locations and a classy score by Jerry Goldsmith. Thompson and cinematographer Alex Phillips Jr. (BRING ME THE HEAD OF ALFREDO GARCIA) get some real nice looking shots in the climax, which takes place in the bar when it’s closed.. They move the camera around this built-from-scratch set and get some real nice depth and shadows. This scene also has some good gimmicks involving a jukebox and the aforementioned parrot.

I’d say my favorite scene, though, is the fight between Giff and Nazi henchman Horst (Denny Miller, TARZAN THE APE MAN). Giff repeatedly bashes Horst with a gas can and then pushes him onto a bed and picks up the bed and dumps him against the wall. The book Bronson’s Loose AGAIN!: On the Set with Charles Bronson by Paul Talbot explains some dirty tricks Bronson used to get rid of the stunt doubles so that they could do the whole scene themselves. They used real furniture, and Bronson badly wounded three of his fingers, but kept going. I wasn’t surprised to read this, since the scene seems pretty out of control and dangerous compared to the standard cowboy movie style punch outs you might expect from other 1980 movies.

But too much of the movie is dull and uneventful. Of course Robards and Rey are good, but if it was someone less compelling than Bronson in the lead I don’t think I would’ve sat through it. According to the book, the released movie is actually greatly shortened from the director’s cut, but it sounds like this might be a bad thing since they cut out action scenes and Bronson’s original introduction. The constant rewriting during filming may also explain the story weaknesses. Producer Lance Hool (director of STEEL DAWN) envisioned it as a funny pre-INDIANA JONES adventure film, but he felt overruled by other people insisting what Charlie would and wouldn’t do. The original script revolved around a giant squid! That would’ve been fun. I don’t think Bronson really fought any animals other than the White Buffalo, did he?

The DVD has a vintage making of featurette and a commentary track by Talbot, the Bronson’s Loose author. One thing he mentions there but not in the book is that one of the earlier versions of the script had a blues guitarist version of CASABLANCA’s Sam,

Another bit of trivia from the book and commentary: 17 years later, Hool discovered that the sets were still standing, so he used them for McHALE’S NAVY starring Tom Arnold and Bruce Campbell. Giff’s establishment, now with pink neon added to the arches, is the location of a big bar brawl scene: 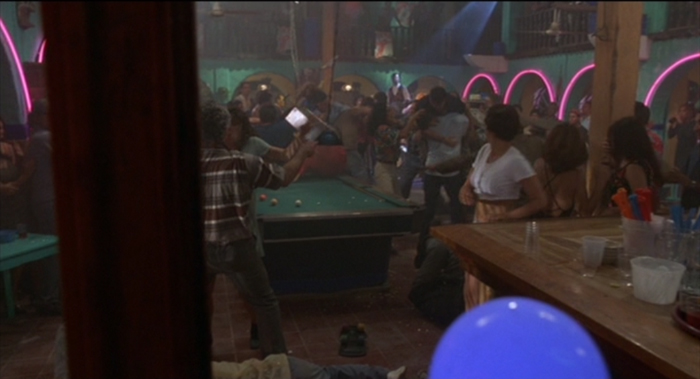 …and look, I’m pretty sure they still had the same jukebox to use as random junk on this other set: 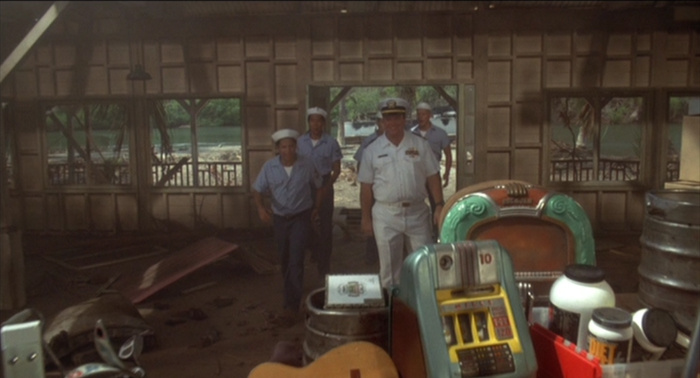 Not the parrot though. This review is dedicated to the memory of the parrot from CABOBLANCO, where legends are born.

Camilla Sparv Charles Bronson Denny Miller Dominique Sanda Fernando Rey J. Lee Thompson Jason Robards Jerry Goldsmith sort of remakes
This entry was posted on Friday, February 3rd, 2017 at 11:07 am and is filed under Action, Reviews. You can follow any responses to this entry through the RSS 2.0 feed. You can skip to the end and leave a response. Pinging is currently not allowed.