Here’s a cast that comes pretty close though: Charles Bronson, Toshiro Mifune and Alain Delon. I mean, that’s pretty fuckin good, right? You could argue whether or not Bronson + Delon > Marvin. But there’s other people in this movie, not just those three, and that lessens the impact. The minimalism of HELL IN THE PACIFIC is part of what makes it so great. 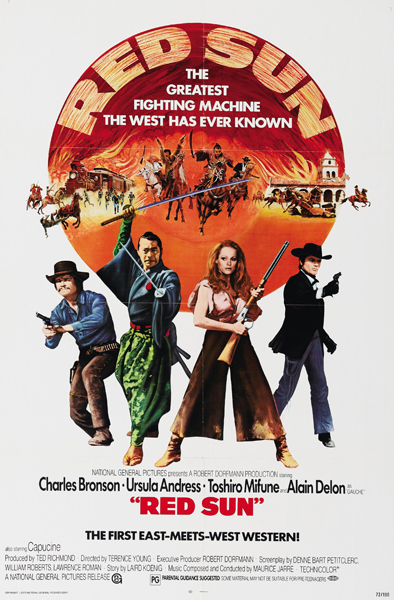 However, this one has something going for it: Charles Bronson is a cowboy. Toshiro Mifune is a samurai. In the same movie. I’ll pause now for you to go rent the movie.

Thanks for coming back. In case you haven’t watched it yet, I’ll explain. Bronson and Delon are pulling a train robbery. On one car of the train is a Japanese ambassador guarded by two samurai. That’s got nothing to do with the robbery but while they’re poking around, Delon notices a ceremonial samurai sword the ambassador is bringing as a gift. So he takes it, and shoots one of the samurai that comes after it. Then him and some guys pull a doublecross on Bronson and take off with the boodle.

Things are changing in Japan, the age of the samurai is wrapping up, and this trip was gonna be Mifune’s last mission. So now he’s given 7 days to get the sword back and if he fails, he’s gonna disembowel himself. Bronson of course is gonna go after the gold Delon stole, so, as much as Bronson doesn’t like it, Mifune goes with him.

So it’s really a buddy movie, the bandit and the samurai who hate each other but are forced together, eventually bond and are willing to make sacrifices for each other. There’s even a joke I’m pretty sure they lifted for RUSH HOUR, where Bronson keeps talking shit to Mifune’s face before he finds out that he speaks English.

So no, this is not related to RED DAWN or communism. It’s red sun because of the japanese flag is a red circle or sun. What I’m saying is, Mifune comes from Japan. That is why he is a samurai. Since he’s a samurai, there’s some sword on gun confrontations. Bronson is able to keep Mifune at bay by pointing a gun at him. But when people are shooting at a samurai, a sword is gonna have to do. And Mifune shows that he can pull it off sometimes. I would like to see this explored in more detail but I’m not sure when it will come up again.

One complaint, I wish they coulda worked a shark into this somehow. I guess that is an unfair criticism really. But it woulda been cool.

Anyway, we’re not talking Leone level of quality here (although I bet a remastered and letterboxed version would be more impressive than the versions available now). But it’s a good gimmick. If you like spaghetti westerns, samurai movies, Charles Bronson and Toshiro Mifune, it’s obviously worth watching. If you dislike those things, I don’t know what to tell you. I think Kramer vs. Kramer is on cable right now.

Alain Delon Charles Bronson samurai Terence Young Toshiro Mifune Ursula Andress
This entry was posted on Wednesday, May 25th, 2005 at 9:36 am and is filed under Action, Reviews, Western. You can follow any responses to this entry through the RSS 2.0 feed. You can skip to the end and leave a response. Pinging is currently not allowed.