So I was an idiot to put off watching the movie as long as I did. What really did it was I was lookin through a used book store (seriously, I read books) when I saw the book MR. MAJESTYK by none other than Elmore Leonard. I pulled it out. The dude on the front was definitely not Charlse Bronson. But I read the back, and sure enough, it was about a badass watermelon farmer. 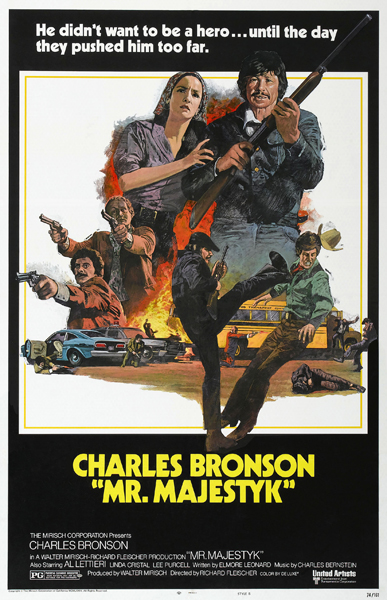 Well shit man, you should’ve mentioned it was Elmore Leonard. If the movie is an indication, this is one of his leaner ones, with less of the clever dialogue and irony, and more of the ass kickin. The filmatism is that raw ’70s type, where it sometimes feels less epic and more like CHiPs, but not usually. (To be fair the video is full framed and could use a little of the remastering, and that always makes ’70s movies seem like TV.) There is a pretty great theme song that lets you know right off that the movie means business, just like a Dirty Harry movie or the better Robert Clouse karate pictures.

Of course it is Charles Bronson who is gonna make or break a picture like this, and let’s face it he’s obviously gonna make it. The role is perfect for him – a quiet, righteous working class farmer motherfucker who stands up for the people but only because he wants them to pick his watermelons. He’s down with the mexican immigrants, and this is the one major weakness of the picture because being the ’70s, you got a lot of mexicans in here who look suspiciously non-mexican. What was it about our cinematic past, man, that these filmatists thought they could only hire white actors? We always laugh at the idea of shakespeare or kabuki having men play the women but then everywhere you look in our old movies you see white dudes playin indians, mexicans, chinese, etc. I mean when Spike Lee made DO THE RIGHT THING, he didn’t paint a black dude white to play Sal. No, he actually went out and found Danny Aiello, a genuine italian american type actor. Because it would look ridiculous to have Ossie Davis pretending to be Sal. That is why he plays da Mayor instead. I mean it’s obvious. Were casting directors insane back then?

Especially for a picture like MR. MAJESTYK that pretends to be a little bit progressive in race and class type issues it is kinda sad that they couldn’t look long enough to find actual mexicans to play all the mexicans. But oh well, I’ll get over it.

I should probaly mention, the plot is not only about the watermelon industry. It is more about complications thereof. The trouble begins when Mr. Majestyk drives up with his picking crew, ready to pick the melons. But there are a bunch of winos out there already pickin em. Turns out an obnoxious white dude is trying to pull a swindle on him, bringing a crew of winos together to pick the melons for cheap, so that Majestyk will pay him. Majestyk feels bad for the winos but he’s already promised the work to this crew he brought in, and he’s not about to screw them, even to save a little money. So he tries to chase the white bastard away. And then it gets messy. There is a shotgun involved, to name one example. But it’s innocent, and nobody gets killed.

This bullshit gets reported to the police, though, and Majestyk has to spend some time in jail while things are straightened out. This completely screws him because if he doesn’t get those watermelons picked right away the whole crop will be wasted.

As luck would have it, he gets transferred in the same bus with a notorious mafia hitman who’s trying to escape. So what he does, he helps the hitman escape, then tries to trap him for the police, so he can make a deal and get back to the watermelon farm. The guy is all over the news, but Majestyk isn’t impressed. He figures he can handle him. Things don’t work out as planned though so now he has to worry about the white dude, the mafia, AND father time and his impending attack on the freshness of the watermelons.

Well I don’t want to give anything away man but the watermelons end up gettin it. And I mean gettin it bad. The mafia blows the shit out of those watermelons. God damn it, man, you feel bad for Mr. Majestyk.

And the watermelons really are the key to this movie. Majestyk has one easy goal. And he looks straight ahead to it. He doesn’t let a stupid thing like a mafia hit list distract him. It reminded me alot of Parker, actually, his simple minded, goal oriented ass kicking. No matter how complicated things are he always keeps his eyes on the prize.

Because of this great, streamlined Badass plot I think this is definitely up there with the top Charles Bronson pictures. Thank you everyone who recommended it to me. I’ll spread the word too.

Charles Bronson Elmore Leonard
This entry was posted on Wednesday, January 1st, 2003 at 7:58 pm and is filed under Action, Crime, Drama, Reviews. You can follow any responses to this entry through the RSS 2.0 feed. You can skip to the end and leave a response. Pinging is currently not allowed.