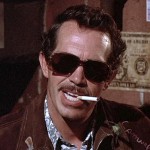 I really like Peckinpah, especially one that I guess is not generally considered one of his best, The Getaway. I like that this is a guy who makes violent westerns and crime movies but instead of trying to dazzle the audience with explosions and car chases, he seems to pour his filthy old grizzled alcoholic soul into it. All of his frustrations, problems and paranoid delusions seem to end up in there somewhere. He knows that a good personal film is not necessarily about some dude reading poetry and being misunderstood by the ladies.

I never knew what this one was about, but I always wanted to see it because of that title. And people recommend it to me all the time as one of the greats of Badass Cinema. It placed #77 on the original Badass 100, but with its reputation and inevitable some day release on American DVD, I bet it will slip up a little higher if we ever revise that list.

But I gotta be honest, just to help out anybody that might be in that same situation. As great as this movie is, it is not as COMPLETELY FUCKING BAD as the title may imply. And I’ll explain why but let me tell you what it’s about first.

The movie starts out like a beautiful postcard in some Mexican villa somewhere. Ducks swim in a little lake while a young girl, obviously pregnant, sits at the shore. The girl gets brought inside to face her rich and powerful dad, who has his men rough her up until she will say who the father is: Alfredo Garcia. The old man is sad. “He was like a son to me.” And then of course he tells his men there will be a million dollars for whoever brings in this Alfredo’s head.

That’s where Warren Oates (not from Hall and Oates – this is the guy from Cockfighter) comes in. A couple tie wearing white dudes come into his bar, where Warren’s character Benny plays organ and entertains everybody, and they ask him if he knows where this Alfredo guy is, offering a good chunk of change to find him. Asking around later, he finds out where Alfredo has been the last couple days – shacking up with Benny’s girlfriend Elita. God damn it. This makes it personal, so Benny becomes interested in the job. Especially when he talks to Elita and finds out that Alfredo has since died in a car accident. So now he knows he doesn’t even have to kill anybody, just dig up a body. So yeah, he takes the job.

But you know, I don’t know if this is gonna surprise you, but it turns out to be more complicated than just dig, chop, bag, collect money. First he has to convince Elita that it’s a good idea. And this being Peckinpah, there is a long, serious, romantic talk under a tree as the two discuss the idea of getting married and spending their lives together. Next thing you know (again, this being Peckinpah) they’re camping out and two random bikers – one played by the great Kris Kristofferson – come over and try to rape poor Elita.

Man, it would suck to be a woman in a Sam Peckinpah film. What did this guy’s mother do to him, anyway? Every Peckinpah hero has to rough up his woman all the time. Benny pushes Elita around like he thinks they’re those brothers in Gummo. And now this biker shit. And of course the worst part is when she starts kissing Kris Kristofferson and acting like she likes it.

That’s fine, Peckinpah can have his mental problems as themes in his movies, but here it’s a detriment. Because we already remember the title of this movie, and it is not Raped By Bikers. We don’t want to hear about this shit, we want to hear about Alfredo and the bringing of his head. There is already enough craziness going on in this movie, we don’t need an interlude about being raped by random passersby.

But after that it gets real good. They find Alfredo’s grave, and all hell breaks loose. Different factions fight over the head including not only people trying to get the money, but the Garcia family themselves. And the further along Benny gets on his mission, the more people he has to kill, and the crazier he becomes. When Elita is inevitably killed, there is a long scene where he shakes her dead body, trying to get her to come to, then chews her out, blaming everything on her. Next thing you know he’s driving around with the head in a bag, covered in flies, talking to it and calling it Al.

There’s this one shot of him driving and if you look closely, you can see that there are real flies on the inside of the windshield. I wonder how they did that? Was he really carrying around a sack of rotten meat?

Anyway, he brings the guy the head of Alfredo Garcia, but the whole thing has turned into a big fiasco, so instead of letting all these scumbags get what they want, Benny decides to take out a quick revenge on all the parties he considers responsible. The end, hooray. Good cinema from Sam Peckinpah, aside from that biker rape shit.

But let me explain what I was talking about before. This is not a criticism, just a description. When I picture Warren Oates in a movie called BRING ME THE HEAD OF ALFREDO GARCIA, I imagine the baddest motherfucker of all time. I picture a guy gritting his teeth, sweat dripping down his brow, pistol whipping you in the nose with one hand, carrying a head by the hair in the other hand. A guy that makes Lee Marvin and Charles Bronson go “Oh shit!” and run off to hide in the bushes. “Is he gone yet, Lee?” “I’m not sure Charles, I’m staying down until it gets dark, at least.”

That’s not the guy he plays here though. Here he’s kind of a gangly goofball that starts shooting people when it comes down to it, but he wouldn’t know what to do if all he had was a head and no gun. MAYBE throw it at you, but he probaly wouldn’t even think of that. You can’t picture this guy punching somebody’s teeth out. He could never be trusted to crush a guy’s knuckles in a door or bite off any cheeks. He wears sunglasses for almost the entire movie. Not like Blade though. These are giant oversized sunglasses, like Stevie Wonder or something. And he’s the MC at this bar. I think his character is kind of based on Peckinpah, but he reminded me more of Paul Schaffer.

Which is fine. It works. I just wanted to warn you though, just in case. thanks.

Kris Kristofferson Sam Peckinpah Warren Oates
This entry was posted on Sunday, July 18th, 2004 at 3:56 pm and is filed under Crime, Drama, Reviews, Thriller, Western. You can follow any responses to this entry through the RSS 2.0 feed. You can skip to the end and leave a response. Pinging is currently not allowed.

8 Responses to “Bring Me the Head of Alfredo Garcia”