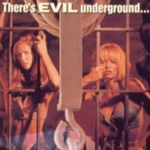 Welcome to SLASHER SEARCH ’16. Every October I try to watch a bunch of obscure, uncelebrated slasher movies I haven’t seen before in hopes of finding good ones. It doesn’t always work out.

TRAPPED ALIVE is not the type of precious ore I’m digging for in my annual Slasher Search. I say that because #1 it’s not very good and #2 it takes place mostly in an abandoned mine. So you can see how clever I am there, working those two things together. Anyway, it’s not the worst kick-off to a Slasher Search either, because it’s not without its goofy charms. This is a strength of the horror and action genres: you’re looking for a good one, but you might enjoy a bad one. It’s usually gonna be more fun than a bad drama, comedy or western or something.

This one starts as a hostage thriller, too cheesy and amateurish to be LAST HOUSE ON THE LEFT gritty, but sexual-assault-threateningy enough to make you feel gross. Robin and Monica (Sullivan Hester and Laura Kallison, both one-time-only actors) are two young women in poofy ’80s glam fashion who are driving to a Christmas party when they’re carjacked by three prison escapees. You have the Krug-like ringleader Louis “Face” Napoleon (Alex Kubik, BAD GIRLS, BE COOL), the bushy-bearded, simple-minded oaf Mongo (Michael Nash, THE COLOR OF MONEY), and Randy (Mark Witsken), the young driver who looks kinda like the guy from 7th Heaven, has misgivings about the kidnapping and is obviously supposed to be the nice, dreamy escaped convict. Not even like a James Dean bad boy anti-hero, just the straight-up nice kid who happens to have just escaped from prison. It’s weird.

The other two manhandle and scare the young women, but then Randy crashes the car and they collapse into the old mine, where the torment continues for a while before (and actually after) they realize they’re being stalked by a monstery looking cannibal miner guy. He attacks and then very, very, very slowly rises up on a chain attached to some kind of winch above. Later this is used to hook one of his victims and very, very, very slowly lift him up to the top where the miner bites his throat.

It just occurs to me now that there may be a slasher subgenre of miner horror: this, MY BLOODY VALENTINE, the MY BLOOD VALENTINE remake… okay, I don’t know of any others, but I have a feeling there are some, probly even ones I’ve reviewed and forgotten about. 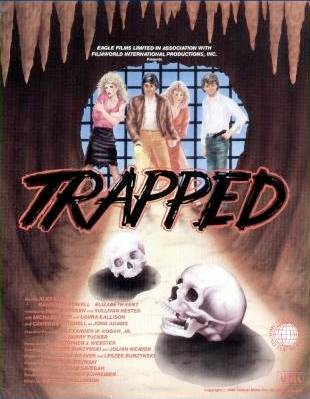 This one has two subplots. One is just about Robin’s dad, Cameron Mitchell (ACTION U.S.A., THE SILENT SCREAM), having a Christmas party and waiting for her. He toasts “and to my absent friends” to himself and looks longingly at some photos, I guess of his late wife and his daughter in graduation gown. This is the most professional looking part of the movie, and also the part that would make sense to cut down to one or two brief cutaways. It was made more interesting by my not paying enough attention at the beginning. For a little bit I thought this sedate Christmas party was the one that the two girls got all gussied up for, and that this old man was waiting for them. That would’ve added an extra layer of unsavoriness.

The thing that makes this subplot worthwhile, and probly the reason Mitchell was willing to do the movie, is that he does a tearful monologue talking to the photo of his dead wife over the sound of a music box. “She’s all I have. And I’m scared. I’m so scared.” He gets really into it.

Also his character is named John Adams. Not the founding father one, I don’t think, or if he is they did a really bad job of conveying it.

The other subplot is about Rachel (Elizabeth Kent, MINDWARP), a lonely housewife living near the mine. When officer Billy Williams (Randolph Powell, WARLORDS OF THE 21ST CENTURY) comes in to use her phone she acts weird and bashful, gives him a plate of cookies, they talk about their sad lives and then makes sweet love on the floor next to the fireplace. She asks him if he’s ever been in a mine, not out of genuine curiosity but as a setup so she can say “It’s like this. You go down – down – down… eventually you find a shaft…”

I don’t think it’s ever made clear if he knows she’s married and that her husband is asleep and snoring in the next room wearing long underwear. He actually sleeps through the entire movie. If this was a better movie he’d be one of the great obscure horror characters. The sleeping husband t-shirt from Fright Rags would be the one for the real serious TRAPPED ALIVE nerds.

Billy eventually puts his shaft away and goes down into the mine to save the ladies and/or arrest the fugitives. For some reason there’s a phone that goes from the mine to Rachel’s house, and we see her answer it and rather than help the people she just talks in funny voices and giggles. To me that was a sign that she was not to be trusted.

There are only these characters I’ve mentioned, and some of them survive, so there are very few kills. The best gore moment is when Randy finds Mongo dead and disemboweled with his face chewed off. Randy accidentally drops his flashlight into Mongo’s open belly and has to reach into the intestines to pull it out. Then he rubs his face and accidentally smears blood on it.

There’s a weird part where Monica is on the other side of some iron bars from the others and gets grabbed by the miner. Randy carefully aims Billy’s gun and shoots… Monica in the head. You sort of have to assume he was trying to hit the miner but missed, but he doesn’t act upset or surprised about it. I kinda think he was putting her out of her misery and it didn’t occur to him he could try killing the miner instead of her. If so, it didn’t occur to anybody else either. Everybody seems to accept it and move on.

There’s all kinds of terrible dialogue and ridiculous behavior. The women play obvious tricks to psych out the stupid men. Face makes Monica dance for him, she flashes her tits and he’s reduced to a blubbering idiot. When she wants to distract Billy to steal his gun she pretends to be angry at Robin and Randy and declares “I despise convicts!” Both of them are way too instantly trusting of and willing to do anything to help the nice boy who helped abduct them. It doesn’t seem like it’s supposed to be Stockholm Syndrome, it seems like it’s supposed to be a correct judgment of his character.

When he tells Robin his name is Randolph Carter she says “Randolph – I like it. ‘Randy and Robin’ has a good ring to it, don’t you think?” I’m surprised she doesn’t practice signing her name “Robin Carter” in her notebook.

At the end, Robin suddenly strips to her bra and granny panties, goes underwater for a couple minutes and comes up saying she found a way out. But then the miner comes out of the water so she stabs a spear into his mouth and he’s immediately dead. You expect the thing where he turns out not to be dead, but instead Crazy Rachel pops up and blubbers “Congratulations! You killed my father!” She gives a long, insane monologue explaining that she’s the daughter of the miner who was supposedly killed in an accident but actually survived and she knows he’s a cannibal and tries to help him find meat or something. It’s pretty good mega-acting where she cries and giggles and has snot all over her nose and then reveals that “we can be at peace forever” because she’s gonna set off some dynamite and collapse the whole thing on top of them. That scene kinda makes the whole movie, like Rambo’s tearful monologue at the end of FIRST BLOOD.

It also ends with a corny end credits ballad like FIRST BLOOD, a song by Jeffery Lyle Segal (also hair stylist, makeup department head, special effects artist and Chicago casting director) with the excellent pun title “Forever Mine.” That’s also the name of the production company, so I think that was the original title of the movie. It also seems to have been released as just TRAPPED. So that can’t be used for the part 4 where the streamline the title, ala FAST AND FURIOUS or RAMBO.

This one was filmed in Eagle River, Wisconsin. Although THE OMEN II and III also filmed there, the low amount of credits for most of the actors seems to point to this being one of these regional independent horror films. However, director Leszek Burzynski stayed in the industry, directing WOOLY BOYS (2001) starring Peter Fonda and Kris Kristofferson. Now he seems to work in advertising and educational films, and is even on Twitter. He had previously produced BLOOD HARVEST, the horror movie starring Tiny Tim. In 2009 he apparently appeared in an episode of Tim and Eric Awesome Show, Great Job!, playing “Diah Rih-Jones.” Here’s a podcast I haven’t listened to where he talks about his career. If you listen let me know if he mentions TRAPPED ALIVE or the sleeping husband in it.

Segal went on to work in “permanent makeup,” and his websight mentions him doing makeup for Oprah at some point. I think we can speculate that she was a big TRAPPED ALIVE fan and sought him out because of it, but so far I’m not able to prove it.

abandoned mine Cameron Mitchell slashers
This entry was posted on Thursday, October 6th, 2016 at 1:54 pm and is filed under Horror, Reviews. You can follow any responses to this entry through the RSS 2.0 feed. You can skip to the end and leave a response. Pinging is currently not allowed.