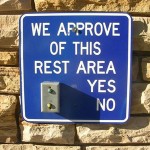 But what is the one thing that most of those places have in common? You are not there right now. So you would have to travel to get there. And with the exception of (arguably) the mysterious island you would most likely have to drive there. And if it was a long way from where you are now you might have to stop and pee at some point before you get there. BAM! That’s where the rest stop comes in. I feel I have just proven that a rest stop is more of a threat to you than a torture chamber. So be careful.

And of course there’s so much to work with for a rest stop horror movie. The free stale Chips Ahoy type cookies, the jugs of McDonalds orange drink, the coffee in styrofoam cups, the drinking fountain. I mean the possibilities are endless. The tagline for REST STOP is “dead ahead,” but it could also be “Get out to stretch… AND DIE!” or “In the dog walking area no one can here you scream.”

REST STOP is the first in a line called “RAW FEED” which is supposed to be higher-than-you-could-reasonably-expect quality straight to video horror movies. The look is nice and realistic, seems to be mostly shot on location, nice cinematographing, pretty good acting, music doesn’t sound cheap, no avid farts or anything, no distracting CGI, and not too jokey (in fact not jokey at all).

So their hearts are in the right place but, unfortunately, it’s still not all that captivating. The story is basically THE VANISHING TEXAS DUEL MASSACRE. A young couple headed for California stop at the rest stop to pee, the bathroom is creepy, when the girl comes out the boy and his car are gone. They were just having a fight but the movie doesn’t really play much with the idea that maybe he abandoned her on purpose, instead it immediately becomes clear that a weird pervert (whose face we never see clearly) who drives a yellow pickup has taken the boyfriend and is stalking the girlfriend trying to terrorize her. So she can’t rest, even though it’s a rest stop.

There is no celebrity or b-movie cameos in the movie. Well, actually, little Joey Lawrence is apparently in there, he must be the police officer who tries to help her but if so he is unrecognizable, I didn’t once think “Joey Lawrence? Gimme a Break!”

As far as I know there is no universal fear of rest stops for them to play off of, but there must be a fear of public restrooms because this has come up before with the gas station in LEATHERFACE: THE TEXAS CHAINSAW MASSACRE PART 3. And I think maybe the lady had to use the restroom in John Carpenter’s BODY BAGS, the segment where the guy from REVENGE OF THE NERDS plays a gas station maniac. Plus people get killed in outhouses in many horror movies, including but not limited to FRIDAY THE 13TH PART 2 and THE HILLS HAVE EYES REMAKE PART 2. In this one the boyfriend actually tries to get her to pee in the bushes but she refuses and that’s why they go to the stop. So really what this is is trying to scare women into peeing in a bush. It’s pro-peeing in a bush propaganda.

There are some Creepy Redneck characters in the movie too, obviously inspired by TEXAS CHAINSAW MASSACRE, but more like the crappy remake than the original American classic. I’m tired of these kind of characters, the backwards trailer trash with forty year old clothing, phony accents and extreme religious beliefs. It’s a fuckin cartoon, they never seem like actual people. I did kind of like the weird little guy who’s always taking pictures. Kind of Mini-Me meets the peeing wheelchair guy from TEXAS CHAINSAW: THE HORRIBLE REMAKE. In one of the alternate endings he actually shows up at the girl’s house at the end. Not sure how he got there. Hopefully in a little remote control car, that would be cool. I wonder if he ever fought Dollman.

There’s nothing real scary or shocking in the movie. Probaly the two most memorable touches are probaly the closeups of the stalker’s nostrils as he smells his prey in the restroom, and the scene where a character begs another to put him out of his misery, she fires into his mouth and blows his brains out but he somehow survives and yells that she’s a bitch before she shoots him again.

One gimmick they come up with from the rest stop location is to use bathroom graffiti as a record and form of communication between the rest stop’s previous victims. It starts to get more weird when she peels off a layer of paint and finds graffiti about the killer going back to the ’70s. There is kind of an ambiguousness in the time period too, it starts to seem like something supernatural is going on when she meets a girl who literally thinks she’s in the ’70s.

What exactly is going on is left vague. Is it just some psycho in a pickup truck who you never see clearly? Or is it supernatural? Judging from the varied alternate endings I’m pretty sure the filmatists didn’t really know what was going on either. Oh well. Maybe they’ll decide something after they’re done shooting part 2.

DTV
This entry was posted on Sunday, October 14th, 2007 at 10:35 am and is filed under Horror, Reviews, Thriller. You can follow any responses to this entry through the RSS 2.0 feed. You can skip to the end and leave a response. Pinging is currently not allowed.

One Response to “Rest Stop”