Day of the Wolves 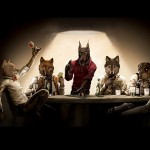 One of Richard Stark’s most ambitious Parker novels is The Score (aka Killtown) where Parker, Grofield and a bunch of other thieves team up to knock over an entire mining town. It would make a great movie, and it already made some french movie called Mise à sac that is not available to mere americans. Day of the Wolves isn’t based on The Score but it sounded similar enough that I thought I should check and be sure. Anything to help out my man Richard Stark.

I gotta warn you, unless somebody decides to put this one out on dvd, I don’t know if anybody else is gonna find it. It’s one of those mysterious dust-covered tapes you find, recorded in EP mode, real bad full frame transfer. Movie you never heard of, director you never heard of, big cast of actors you never seen before, real low production values. The only major connection between this movie and my world is that the cinematographer, when I looked him up, turned out he did three of my favorite Steven Seagal pictures (MARKED FOR DEATH, OUT FOR JUSTICE and ON DEADLY GROUND). But let’s face it, you don’t watch Steven Seagal movies for the cinematography, or at least I don’t. So this movie is a mystery find. And usually those finds don’t amount to much. But this is one of the better ones.

A mysterious criminal mastermind brings together a team of thieves that never met before and gives them numbers from 1-7 as their names. They don’t know what the job is, just the amount they’re gonna get, and that they gotta have a beard. He flies them on a private jet (because a helicopter is hard to steal) to an isolated farm, where they practice and prepare for the big day, but without really knowing the whole plan.

So far the plot is pretty similar to The Score, except the leader is alot more James Bond. The guy in the book is obviously an amateur (it turns out he has a grudge against the town – very unprofessional) and he doesn’t have access to these private jets and shit. Also, the beards is a new touch. The idea is that facial hair will help disguise them, but the reason it’s cool in the movie is because you got this gang of 7 dudes who all have suits, ties, shades, and big, bad ’70s beards. Even if they weren’t holding guns, you’d know the second they get out of that plane that something’s wrong here. Plus, alot of the beards are obviously fake, but they’re supposed to be real in the movie. Those are not good beards.

There is a subplot about the nice chief of police, Pete Anderson, who the city council forces to retire because he takes this crime shit too seriously. This is a small, planned community type of town, he needs to chill out, they figure. So the new trainee takes over on, you know, the day of the wolves.

Just like in The Score, the wolves go in and take the cops unaware and lock them up. For some reason there is a big cage, like an outdoor jail cell, that they lock one up in.

Lucky for the town, Pete Anderson hasn’t left yet. He catches on to the robbery and goes out there, Bruce Willis style, to do what he does.

You gotta be patient when the movie goes away from the wolves. The chief of police storyline is pretty corny, and the little scenes with the townspeople (especially the couple that owns the farm they take over) are silly. And one thing that keeps the movie from being completely engaging is that you really don’t get much character out of any of the wolves except a little bit on #1. They’re all pretty minimalist and hard to tell apart with their beards. But when the robbery starts it’s pretty good, the distance almost makes it work better, like you’re watching it happen for real, not knowing who the fuck these bearded guys are.

Also, the music in this movie is pretty badass. Lots of congas and wah wahs to let you know this movie means business. Then there’s a catchy hippie title song type deal at the end. Good job from Sean Boniwell, who I guess also did THE HELTER SKELTER MURDERS.

And now an ultimatum. Until somebody puts this out on DVD – I’M LOOKING AT YOU BLUE UNDERGROUND – I’m giving away the ending. So here it is. Pete Anderson has a shootout with the wolves as they are all climbing into a moving getaway car. All but 3 of them get away, they make it to the plane and parachute out to different desert towns with the instructions to bury their parachutes and shavers. (Most of the guys turn out to look pretty cool without the beards.)

But one wolf was shot and captured. He wakes up clean shaven in the hospital and just smiles at the cops as they prod him for information. He makes a deal to tell them everything he knows, which is nothing! He doesn’t know who anybody was and when they ask who the mastermind is all he can say is “#1.”

Stuck in a hospital bed, the guy is forced to watch some kiddy show about a clown on a unicycle telling the story of Ali Baba. The cops come in and start hassling him again. And suddenly he just starts to laugh and laugh, as he realizes that the clown on TV is #1. the end.

Okay, so it’s not PSYCHO, but it’s a good ending.

heists Richard Egan
This entry was posted on Friday, December 17th, 2004 at 4:01 pm and is filed under Crime, Drama, Reviews. You can follow any responses to this entry through the RSS 2.0 feed. You can skip to the end and leave a response. Pinging is currently not allowed.