Looking back on my review of the first one, I’m reminded that they went 20 minutes before showing the turtles, and wasted a bunch of the plot on the human characters trying to explain to other human characters that you gotta believe me there are these turtles. Part 2 starts with all that shit out of the way and the special effects already figured out and now we already got a talking brain with tentacle hands right here at the beginning. This is clearly a way better movie!

You know something else? You know the Paramount studio logo, with the stars skidding across the water and going up around the mountain? They redid that with throwing stars. So obviously I saw that and I was in a good mood right from the beginning.

They also add two other colorful cartoon villains named Bebop (Gary Anthony Williams, aka Uncle Ruckus from The Boondocks) and Rocksteady (WWE Superstar Sheamus) who get turned into a warthog and a rhino. They are forever transformed, but they do not experience the pangs of body horror. They immediately think it’s awesome because they can headbutt things and they have big animal dicks now (they checked). I think it’s awesome because this is one of the only movies with a warthog sporting wrist spikes, a purple mohawk and sunglasses. They’re bikers but also punks, created by people who didn’t care if there was a difference, resurrected in a time when colorful hair no longer signals alley rapist. Echoes of misused signifiers from a previous era. 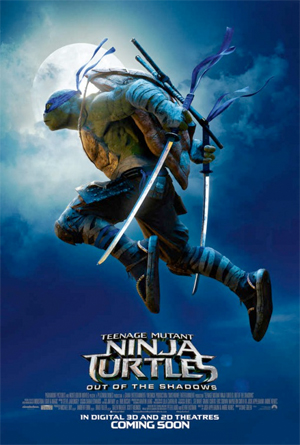 On the good guy side they added hockey fan cop Casey Jones (Stephen Amell from Arrow), but he’s not a cool special effect, he’s just some dude that wears a strange goalie mask during one fight scene. Not a great addition – at best he’s a human love interest for ace reporter April O’Neil (Megan Fox) to block the turtles from sexually harassing her.

As the turtles try to stop Shredder from stealing the parts to a machine that will open a portal or whatever there is some in-fighting. Leonardo always broods about their teamwork being subpar, while Raphael roid rages about not being allowed to kick ass on his own terms, or sneaks off and lies about it. The theme of the movie is they wish they could come “out of the shadows” and even consider using a chemical that for some reason would turn them into humans. Ultimately they decide to (SPOILER) stay turtles but also to stay hidden, so the status quo is pretty much the same at the end, except that now they have a relationship with the police department. Which brings up ethical questions for the police in my opinion. I guess maybe they’d just consider them informants from within the mutant ninja community.

There are a few comical vignettes with the human characters for padding (April creates a sexy schoolgirl outfit on the fly to get information out of somebody – long story) but there’s a high concentration of these sophisticated FX depicting ridiculous, cartoonish scenes, and for the most part they look spectacular. They got me thinking that it wasn’t a lie when AVATAR came out and everybody called it a “game changer,” because here we are in a world with this incredible technological craftsmanship in a lowbrow kid’s movie, and nobody bats an eye.

These are literally surface pleasures – I like how real it looks when they’re standing in a river, water dripping off of them, sun shining on them. Being a Michael Bay production they have his signature overly-detailed aesthetic, but while all the crap all over his Transformers made them hard to make out, the turtles have visible expressions and poses, and unlike the other Ninja Turtles movies they have different body types to distinguish them from each other, not just color coding. So all the little details – the gadgets and weapons attached to their shells, the scars, the tape on Donatello’s broken glasses – add to the realism instead of getting in the way of the animation. And there’s something fascinating about watching these guys zipping around using unique transportation methods that usually involve flipping, sliding, bouncing, swinging and a rocket propelled skateboard (though sometimes just driving a souped up, manhole-cover-firing garbage truck).

The only letdown really is that the climactic battle, for reasons I couldn’t quite put my finger on, looks like you’re watching someone play a video game. I know it’s partly the way the camera moves and the fact that it’s turtles jumping around on a floating platform shooting things at a monster, but I think maybe there’s something changed in the frame rate or something that gives it a different look from the rest. I don’t know. But it’s the only part that took me out of the world of the movie.

The rest of the time they look like they’re really standing there, and seeing such fantastical creatures in normal live action situations and visual styles is fun. My second favorite part is when they’re caught breaking into police headquarters and held at gunpoint by completely astounded cops. My first favorite part is when they later team with the cops and there’s a brief handheld sequence of them walking in New York City streets with a SWAT team. Like, let’s get a little bit of a gritty police procedural but with some turtle monsters in the cast.

I didn’t like the first movie, but I do have a bit of a soft spot for it because of an absolutely incredible chase scene down a mountain by second unit director Dan Bradley. This one credits David Leitch (co-director of JOHN WICK) and Spiro Razatos (stunt coordinator for the MANIAC COP series and many of the FAST AND FURIOUSes) as second unit directors (something they also did for CAPTAIN AMERICA: CIVIL WAR) and while I can’t say they topped the snow chase I do think they have multiple very good action sequences. The biggest showstopper is when they jump from one jet to another, and I wonder what kind of reference or motion capture you use to create such a believable, photorealistic skydiving turtle?

When Bebop or Rocksteady (I forget which) fires a big gun at them from inside and blows the front of the plane off, Donatello has to perform an emergency water landing. I doubt Clint would’ve bothered making SULLY if he’d seen this. The visual detail on the blown apart plane, the sky and the land that they’re plummeting toward is so real I actually found this sequence scary.

It also delights me that Laura Linney (YOU CAN COUNT ON ME, CONGO, ABSOLUTE POWER) plays the chief of police and that she treats the role completely seriously. I don’t know if she has kids who like the cartoon, or if she only did this as a companion piece to SULLY. Whatever made her agree to the gig she treats it like a respectable movie, even during a scene where she tries to be encouraging to turtles about their place in society. It’s an admirable work ethic and it adds to the movie.

Perry is not as good as Linney, because he seems like he’s trying to be funny some of the time. His character is a little bit like Kanye in that he’s obsessed with being legendary and keeps comparing himself to Steve Jobs and Galileo. He has a better claim to it though because he’s a mad scientist from cartoons who discovered interdimensional travel. Anyway, it was cool to see him in a movie yelling “Get them out of there! Eliminate those turtles!”

Dave Green (EARTH TO ECHO) takes over for part 1 director Jonathan Liebesman, with the same writers, Josh Appelbaum & Andre Nemec (MISSION: IMPOSSIBLE – GHOST PROTOCOL). This time I think they found a much better tone, less obnoxious, more fun. I even found myself laughing at some of the jokes! Like the part where one of them psyched himself up to skydive by talking to himself about Vin Diesel.

I’ll just have to face the fact that I kind of liked this movie. It’s certainly the best of the four ninja turtle movies I’ve seen.

I didn’t pay any attention to this when it came out, so I just assumed it was a hit like the first one and I was actually excited for the next one. Apparently Tyler Perry’s character would turn into a giant fly who still wears clothes. But I looked it up and it looks like this one didn’t make back its gigantic budget. Sorry turtle people. You gave it your best and we let you down.

Andre Nemec Brian Tee Dave Green David Leitch Gary Anthony Williams Josh Appelbaum Laura Linney Megan Fox Michael Bay Sheamus Spiro Razatos Stephen Amell Tyler Perry Will Arnett
This entry was posted on Tuesday, October 4th, 2016 at 10:17 am and is filed under Action, Comic strips/Super heroes, Family, Martial Arts, Reviews. You can follow any responses to this entry through the RSS 2.0 feed. You can skip to the end and leave a response. Pinging is currently not allowed.

20 Responses to “Teenage Mutant Ninja Turtles: Out of the Shadows”